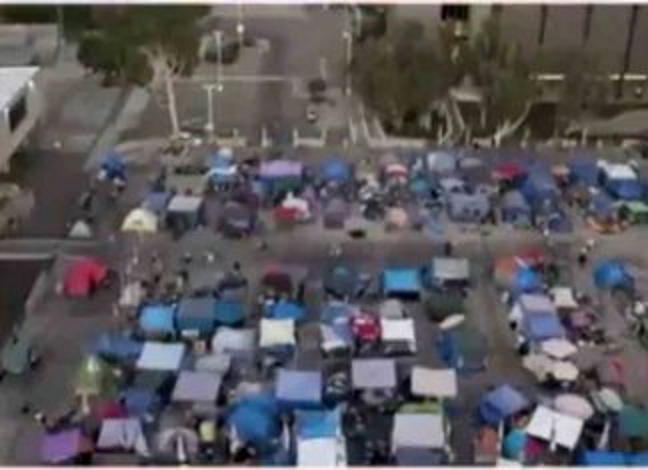 Democrats are determined to destroy this country and make us into some kind of their world pass-through.

Since President Biden took office for Obama’s third term, we have seen a steady, non-stop flow of illegal aliens coming from over 140 countries. In March, 172,000 were caught at the border with about another 30,000 that were not caught. The numbers for April are expected to be the same with about 40,000 plus additional who were not caught.

California’s answer is to set up a permanent tent city on farmland in San Diego, but don’t call it that. Just call it a long-term intake hub.

San Diego County is looking for land on which California state officials can build a purported “tent city” for migrants coming across the border on a long-term basis, according to an email seen by Fox News.

The federal government is not supposed to own land, but they own plenty of it.

San Diego officials don’t like the description — tent city — that they used in the email. They prefer something less descriptive, and more euphemistic.

The email, sent to farmers by the County of San Diego’s Department of Agriculture, Weights, and Measures, says the state is looking for agricultural land for a project that would include services for migrants [illegal aliens] coming into the country.

“The Calif. Department of Food & Agriculture is working with California Office of Emergency Services on finding and renting/leasing on a long-term basis any private, fallowed ag[ricultural] land to build a tent city in the county for the immigrants coming across the border,” the email, seen by Fox News, says. “The State plans to provide wrap-around services as well.”

The email requests responses to the San Diego department by May 14.

A spokesperson for San Diego County referred Fox News to state agencies, saying that the County Department of Agriculture Weights & Measures (AWM) “was only recently asked to reach out to growers about available land.”

“AWM was asked to inquire about available unused ag land for the purpose of a tent city for the immigrants coming across the border,” the spokesperson told Fox News.

However, the California Office of Emergency Services, in a statement to Fox News, said there are no plans for a “tent city,” although the office does support “intake hubs” for migrants coming across the border.

“The state is actively coordinating with federal immigration officials, as well as local non-profit, community-based organizations, to protect the health and well-being of migrants and our border communities alike. There are no plans from the state to create a tent city,” a spokesperson told Fox News in an email.

“Our work includes supporting intake hubs, which will serve as triage sites for migrant adults and families after they are released from federal custody. These sites will provide basic wraparound services including COVID-19 testing, medical screenings, and the coordination of transportation,” the spokesperson said.

Isn’t this cruel and unusual? How is this an acceptable way to treat illegal aliens?

“It is dangerous and it should be immediately rejected, and this is coming on a pattern of catering to illegal immigrants at the expense of US taxpayers here in San Diego,” DeMaio, a radio host and current chairman of Reform California, told Fox News.

Meanwhile, San Diego County Supervisor Jim Desmond said he was “working with county staff to make sure this DOES NOT become a reality.” 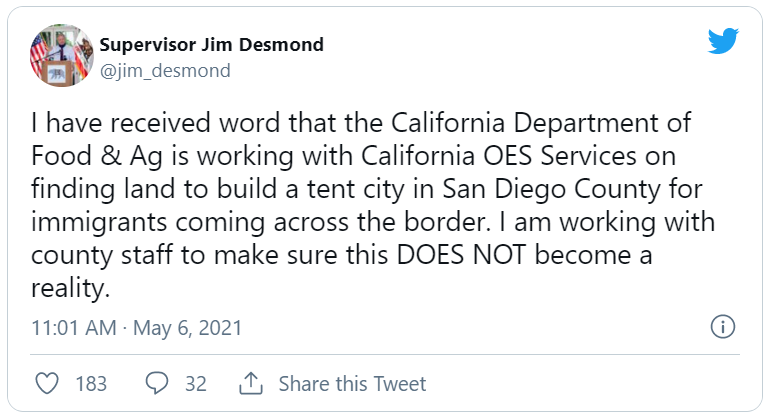 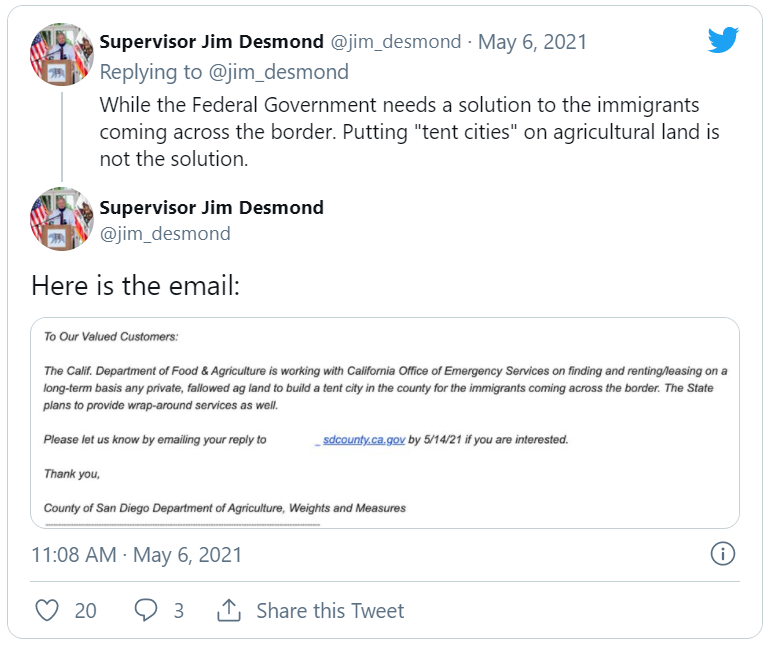 Just what we want, one of those massive tent cities just like the UN puts up in some famine country where it never ends.

That way we can have hundreds of thousands of homegrown Ilhan Omars who come out of those tents to become citizens.