Why the District of Columbia Should Not Be a State 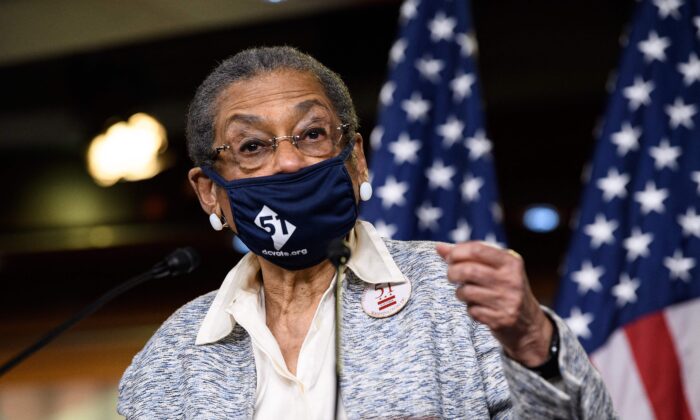 Del. Eleanor Holmes Norton (D-D.C.) speaks during a press conference on the House vote on D.C. statehood, in Washington on April 21, 2021. (Nicholas Kamm/AFP via Getty Images)

Why the District of Columbia Should Not Be a State

In June 1783, the Confederation Congress was meeting in what is now Independence Hall in Philadelphia. Continental soldiers surrounded the building demanding back pay. They were peaceful, but the intimidation was plain.

This incident confirmed the American Founders in their opinion that the national capital should not be at the mercy of any state. The Founders also knew that in European countries, national office holders could be held hostage by mobs that local authorities were unwilling, or unable, to control.

In July 1783, therefore, Congress began to lay plans for a capital district outside of any state, and under direct federal authority. An independent capital district became a top congressional priority.

“The Congress shall have Power … To exercise exclusive Legislation in all Cases whatsoever, over such District (not exceeding ten Miles square) as may, by Cession of particular States, and the Acceptance of Congress, become the Seat of the Government of the United States …”

Securing the national capital from capture was one reason for locating it outside the boundaries of any state. But there were other reasons as well. The founding generation believed that for republican government to survive, decision makers (including voters) should be free from the undue influence of others. They had to be able to make decisions freely, based on full consideration of the evidence. Decisions made by people heavily dependent on others would reflect merely the will of the masters. It was like giving the masters extra votes.

Many participants in the debate over the Constitution expressed concern that residents of the capital district, who would consist largely of government employees and their families, would reflect solely the interests of the government upon which they were dependent. They did not want dependents of the federal government unduly influencing state or national elections.

The Founders also recognized that denying the vote to residents of the capital district would not leave them without influence. On the contrary, prior history showed that those residents would have an outsize influence—partly by reason of their proximity to federal institutions and partly because many would be government officials or employees. Allowing them to participate in national elections would unfairly magnify their power further.

The Constitution reflected all these concerns by making no provision for the capital district having seats in Congress or participating in presidential elections.

In 1788, the Maryland legislature formally offered to cede to the federal government jurisdiction over land for a capital district. Virginia did so the following year. In 1791, Congress accepted Maryland’s and Virginia’s offers. The District of Columbia was established formally 10 years later. The federal government later returned Virginia’s portion to that state, so all of what is now the District of Columbia is former Maryland territory.

In 1960, Congress proposed the 23rd Amendment, which the states ratified the following year. It permitted residents of the District of Columbia to choose three presidential electors. In 1973, Congress passed the Home Rule Act, permitting local self-government for the District.

As currently proposed, the new state would consist of all of D.C. except tiny strips of territory remaining under federal control. It would be called “Washington, Douglas Commonwealth”—presumably meaning the City of Washington in the Commonwealth of Douglas. Many of the arguments over this proposal center on such questions as whether the District is large or self-sustaining enough to be a state.

But those arguments are unnecessary. The history I’ve just recited and the modern implications should be enough to quash the idea.

As demonstrated by the 1783 incident in Philadelphia, D.C. statehood would put the federal government at the mercy of local state officials. “Douglas Commonwealth” officials could refuse to restrain rioters threatening federal institutions. They could threaten or intimidate federal officials to obtain political ends. One obvious tactic might be for Douglas police to harass members of Congress with traffic tickets until Congress passed a particular law or granted the Commonwealth more federal aid.

The terms of Maryland’s 1788 offer of cession also present objections to D.C. statehood. The Constitution authorizes Congress to assume jurisdiction over a portion of a state only if the state cedes it. As another part of the Enclave Clause makes clear, cession represents the consent of the state to loss of some of its territory.

But Maryland’s consent to cession, as well as Congress’s acceptance, was clearly based on the land being used as a national capital. The 1788 Maryland law provides that cession is to be of a “district in this State not exceeding ten miles square, which Congress may fix upon and accept for the seat of Government of the United States.” Maryland did not consent to the creation of another state out of its territory. Doing so would have required action under an entirely different part of the Constitution (Article IV, Section 3).

Another objection arises from the results of the 23rd Amendment. Those results have vindicated fully the Founders’ concerns about allowing District residents to vote in federal elections. As the record shows, in presidential contests D.C. voters do not seriously weigh the merits or demerits of presidential candidates. The District is a dependency of the federal government, and its electorate invariably votes for the party that offers more government—the Democrats. D.C. residents have cast ballots in 15 presidential elections. They have voted the same way each time, and by huge margins: In 2020, Joe Biden took 92 percent of their vote.

These results—disturbing to any but the most rabid Democrat partisan—suggest that rather than admitting the District as a state, we should be discussing repeal of the 23rd Amendment.

Nor has the 1973 D.C. Home Rule Act been a success. In 2012, the Washington Post published a column by a long-time D.C. journalist. Its title tells you all you need to know about government there: “How D.C. became a District of Corruption.” America does not need more corruption in its national councils.

Robert G. Natelson, a former constitutional law professor, is senior fellow in constitutional jurisprudence at the Independence Institute in Denver. He is the author of “The Original Constitution: What It Actually Said and Meant“ (3rd ed., 2014).