By The Right Scoop

James O’Keefe has a new video out today from CNN Technical Director Charlie Chester, where he talks generally about how things work at the network, how they manipulate people, and how they mostly only let people on who will say what they want them to say:

“Any reporter on CNN — what they’re actually doing is they’re telling the person what to say… It’s always like leading them in a direction before they even open their mouths. The only people that we [CNN] will let on the air, for the most part, are people that have a proven track record of taking the bait,” Chester explained.

“I think there’s an art to manipulation…Inflection, saying things twice — there’s little subtleties to how to manipulate people…I mean, it’s enough to change the world, you know?”

“Like, why isn’t it high enough, you know, today? Like it would make our point better if it was higher. And I’m like, what am I f***ing rallying for? That’s a problem that we’re doing that.”

Chester also described how CNN has used the COVID-19 pandemic to keep viewers hooked on the screen.

He added, “COVID? Gangbusters with ratings, right? Which is why we [CNN] constantly have the [COVID] death toll on the side.”

Chester said Jeff Zucker – the network’s president –- would call the CNN newsroom during live TV segments and order the staff to keep COVID death tolls on the screen to capture viewers’ attention.

Chester admitted, “The special red phone rings and this producer picks it up. You hear [murmurs] and every so often they put it on speaker and it’s the head of the network being like, ‘There’s nothing that you’re doing right now that makes me want to stick, put the [COVID death toll] numbers back up, because that’s the most enticing thing that we had. So, put it back up.”

Chester went on to explain how his network manipulates the public and attempts to hide their tactics, in order to be successful in achieving personal political agendas.

“No one ever says those things out loud, but it’s obvious based on the amount of stories that we [CNN] do. The fact that we have a segment called ‘The Good Stuff’, which is a feel-good thing, but it’s a dedicated moment at the end to almost be the ice cream to alleviate everything that you’ve been through. Something sweet to end it with because everything else is doom and gloom,” he said.

Not included in the PV write-up is this from Chester that I alluded to above, where he explains how CNN leads their guests to say what they want them to say:

In summary, Chester confirms that its all about ratings and their leftist agenda. Which we all knew, of course, but it’s so much better to get it on the record like this. Project Veritas is doing the best work out there and Andrew Breitbart would be so proud.

Watch the video for more… 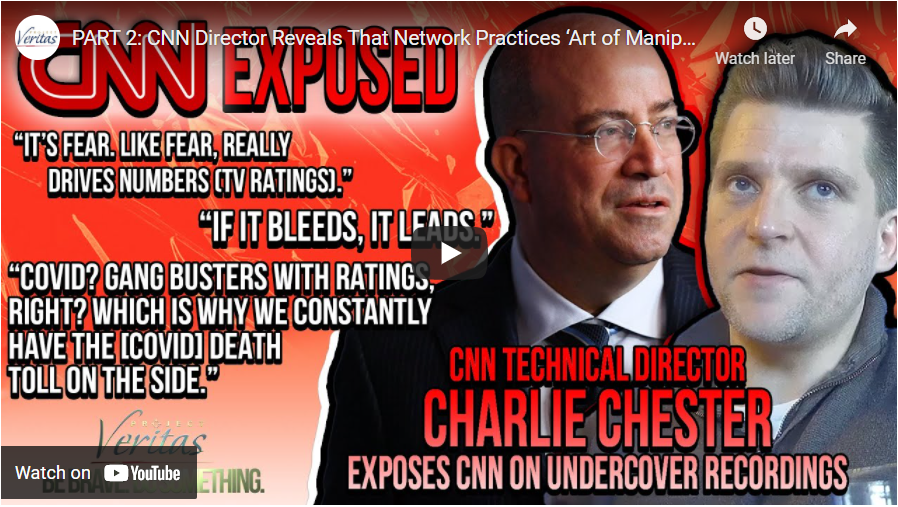