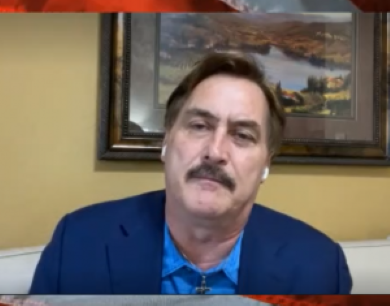 There is no one working harder on the massive 2020 election and voter fraud than My Pillow CEO Mike Lindell.  The voter and election fraud has been documented in many ways, and it was used to steal the election from President Donald Trump.  Insiders from the Deep State swamp, Democrats and Republicans worked together, along with foreign countries, in the biggest fraud in history.  Lindell thinks all the new election fraud proof, added to what has already been uncovered by his team of data scientists and election experts, will ultimately put President Trump back in office as the rightful winner of the 2020 Election. Lindell predicts Trump will be back in office in August and explains, “For one thing, the country will be ruined by August if he doesn’t get back in there.  With everything I know to get all the evidence out over the next 5 weeks to the masses, whether you are Democrat or Republican, it doesn’t matter if you know this was an attack by China on our country.

Even the Democrats are realizing that this isn’t the party they voted for.  This is socialism and communism.  What I want to do is get all this out there and just flood the Internet and flood everybody with information and the evidence.  Then I want to get this case before the Supreme Court.  I believe with what’s going to come before them, they are going to have to accept the case because it was an attack on our country.  There is no statute of limitations for fraud, and this is the biggest crime and the biggest cybercrime in history.  They are going to have to pull that election down.  I don’t know if we have a new election or we just give it to the rightful winner, which was Donald Trump, who had 80 million votes for Trump to 66 million for Biden.  With all this stuff that is coming out, I think August is a good time frame.”

Lindell goes on to say, “I want to tell you what’s coming here.  What I have done in the last month is have people on the ground, and they validated the IP addresses, the IDs of the computers, the longitudes and latitudes, the buildings and who did it.  We did it for 20 of the China attacks on November 3rd.  We had this validated by a third party.  This is what is going to come out in ‘Absolute Interference.’  Just in those 20 cyber-attacks from China, and there were thousands of cyber-attacks, they flipped and turned all five states:  Michigan, Wisconsin, Pennsylvania, Georgia and Arizona. . . . This is coming out in my new documentary called ‘Absolute Interference,’ and it’s going to show this was an attack by China on our country.”

Lindell also says, “What they don’t want you to look at are the voting machines.  They don’t want to do an audit.  I’ve been sued by Smartmatic and Dominion, and these lawsuits and threats to people, and if I was accused of having rocks and knives in my pillows, I would bring all the media in and open them up and say, look, this is beautiful fill, but they are not doing that.  They have been hiding and suppressing the truth.”  (Dominion and Smartmatic have repeatedly said all voter fraud claims with their machines and software are false.)

Never-the-less, Lindell says he can prove the election was stolen on many levels.  150 million have already watched his first voter and election fraud documentary called “Absolute Proof.”

Lindell also says it was not just Donald Trump that was cheated, but down ballot candidates were also robbed.  Lindell says he can also prove fraud was involved in the U.S. Senate seats and House of Representatives seats, as well, in the 2020 Election.

To present his proof of massive election fraud to the public, Lindell is rolling out a new social media platform called “Frank” on April 19th.  Lindell says he spent serious money to deliver serious performance, and up to one billion can use the platform at the same time.  Lindell says, “When we launch at 9 am on April 19th, we are going to have a ‘Frank-a-thon.’ I am going to livestream from that for 12 hours, and we are going to talk about losing our 1st Amendment rights. My Pillow is also going to sue Dominion and Smartmatic.  It will be the biggest 1st Amendment rights lawsuit ever, and Alan Dershowitz is on my team of lawyers.”

There is much, much more in this 50 minute interview.  Lindell also talks about the mainstream media, how they have covered his voter fraud quest, threats on his family, losing millions with stores dropping his products, conversations with President Trump, the big cover-up of the massive voter and election fraud on November 2020 and that he is in the process of making a third documentary called “Absolute Cover-up.”

In closing, Lindell says you are going to hear new evidence about massive election cyber-attacks and the cover-up of the biggest voter and election fraud in history.  Lindell guarantees, “The fraud is all coming out in the next few weeks. . . . We can’t wait until 2022 or 2024.  We have to do something now before they destroy the country.”

Join Greg Hunter as he goes One-on-One with the CEO of My Pillow, Mike Lindell.

(Programming note:  Mike Lindell’s interview replaces Weekly News Wrap-Up 4/9/21 and Saturday Night Post 4/10/21.  I think this interview is that powerful and needs to be heard now.) 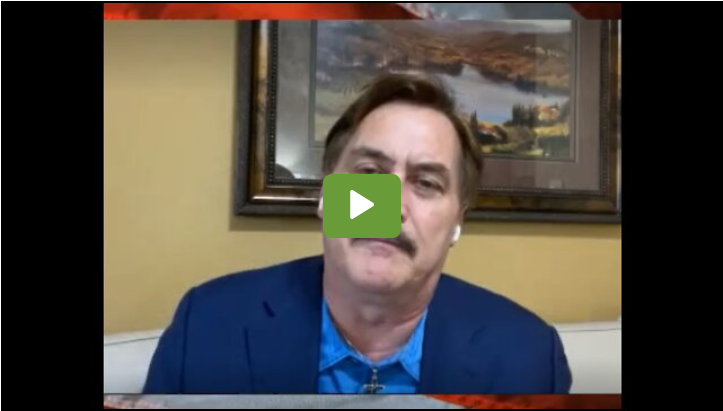 Lindell says if you want to buy any of his many products, you can find them on MyPillow.com.  Lindell offered a discount code that can save you up to 66% on some products.  Use ML33 for the discount at 1-800-544-8939.

(Greg Hunter and USAWatchdog.com get $0 compensation from Lindell or MyPillow.com.  Some of the money from sales, no doubt, goes to continue the election fraud exposure hosted on Lindell’s social media platform called “Frank.”  Lindell is funding all of this effort out of his own pocket.)