Carve the Truth in Stone 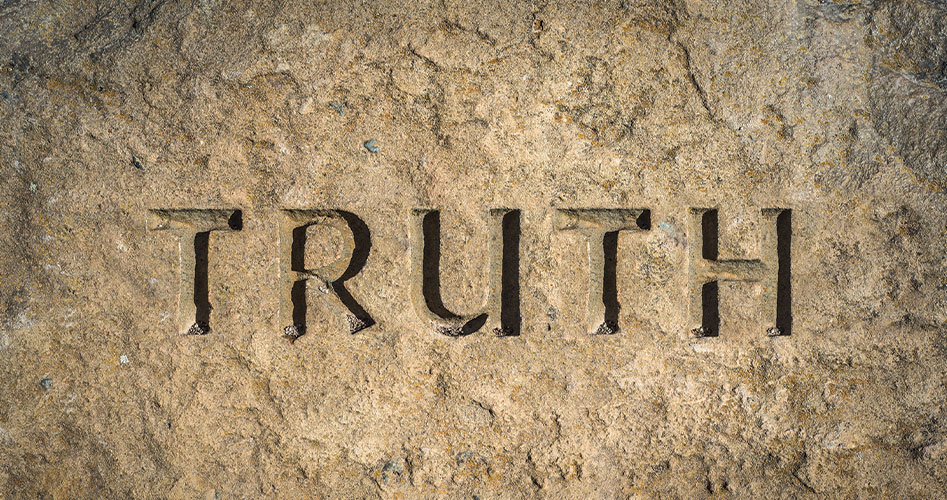 Carve the Truth in Stone

Though the cause of Evil prosper, yet ’tis Truth alone is strong,

And, albeit she wander outcast now, I see around her throng

Troops of beautiful, tall angels, to enshield her from all wrong

Then it is the brave man chooses, while the coward stands aside,

Doubting in his abject spirit, till his Lord is crucified,

And the multitude make virtue of the faith they had denied

The “cause of Evil” is indeed prospering, and Truth does surely “wander outcast now.” The ruling elites of our political and cultural institutions have joined with Pontius Pilate in asking, “What is truth?” In fact, the intelligentsia of our age, for the past century or more, have been declaring there is no such thing as absolute truth, absolute morality, absolute right or wrong.

But the purveyors of moral relativism know that the soul of man has been instilled by his Creator with a desire and need for truth. So, while denying the incarnate Truth (Jesus said, “I am the way, the truth, and the life”) and denying objective truth in general, the moral relativists have no qualms about totally reversing themselves and positing new contradictory “truths” that they insist all humanity must embrace, absorb, and regurgitate as dogma. And they have their media “fact checkers” and “truth meters” to monitor and enforce their new dogmas.

The old truths are being completely uprooted and turned upside down, to be replaced by the new “truths.” This is happening with such ferocity and rapidity that many people are astounded, dumbfounded, and completely perplexed that such absurdities and perversions could be actually occurring. How to make sense of such dangerous and mendacious nonsense? What does one do when the whole world is being turned into a madhouse?

First, it is necessary to realize that the chaos and madness we face is organized chaos and madness. It is the work of several generations of conscious subversion and undermining of truth and the virtues that make a truly humane and just civilization possible: faith, hope, charity, prudence, justice, temperance, fortitude. Christianity, Christian culture, biblical morality, the family, marriage, nationhood, patriotism, national symbols, national heroes, national borders, and more are all targeted for destruction. Who has organized this chaos and madness?

A century ago this madness was unleashed in its most violent form in the Bolshevik Revolution. Under the iron fists of Lenin and Stalin, the Soviet Communist Party began forming the “New Soviet Man.” Tens of millions of corpses later (plus millions more souls banished to the prison gulags) — and after decades of brainwashing, censorship, and police-state surveillance — the communists had achieved a level of brain-dead conformity that almost approximated their ideal of the New Soviet Man. Almost, but not quite.

In China, the communists sought to do the same, beginning in 1950 with their Thought Reform, based on Marxism-Leninism and Mao Tse-tung Thought. A decade and a half later, Mao launched the more radical and deadly version of this “reform,” the infamous Cultural Revolution, in which millions of his young Red Guards were unleashed to attack and cancel the “Four Olds”: old ideas, old  culture, old habits, old customs. Statues, temples, churches, and shrines were pulled down and destroyed. Priceless, ancient books and manuscripts were burned. Christians, Buddhists, Muslims, Taoists, and followers of Confucianism were viciously persecuted and many were martyred. People (including communist professors and teachers) who were accused of politically incorrect thought were publicly humiliated, beaten, forced to confess their thought crimes, and sometimes killed.

Many on the revolutionary Left here in America today, including leaders of Black Lives Matter and Antifa, openly acknowledge their Marxist-Leninist-Maoist pedigrees, as do many of the professors who have trained them. What is different today is the open alliance between these communist-socialist revolutionaries rioting and agitating in the streets and their capitalist-globalist comrades who are not only financing them, but also bolstering them with free media propaganda. Bill Gates, George Soros, Mark Zuckerberg, and their ilk are in accord with Xi Jinping, Mikhail Gorbachev, Ayatollah Khamenei, and the would-be potentates of the United Nations in creating a “New World Order,” a global superstate ruled by the globalist Übermenschen (Supermen, Overmen).

The United States of America is the main geopolitical obstacle to their new order, which is why they are moving so aggressively to destabilize and dismantle it with a series of fabricated crises founded on lies: the COVID crisis, climate crisis, migration crisis, race crisis, gender crisis, etc.

What must we do? Join the “Troops of beautiful, tall angels” and fearlessly, relentlessly seek the truth, speak the truth, and defend the truth — with all the strength we can muster.