Hunter’s back, humiliating his father and the nation 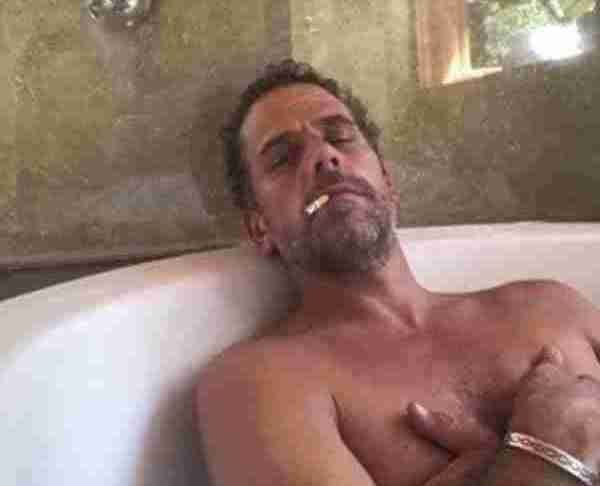 Hunter’s back, humiliating his father and the nation

Hunter Biden is on tour to promote his new smutty memoir, Beautiful Things, discussing humiliating details about his crack cocaine addiction and every disgusting detail about his life of debauchery and womanizing.

This is the son of the sitting President who ran on restoring the soul of America.

Hunter Biden’s memoir reveals that text messages on an iPad tipped off his wife to his affair with his late brother Beau’s widow, according to a report Tuesday.

In “Beautiful Things,” President Biden’s son says that Kathleen Biden — with whom he has three grown daughters — finally decided to divorce him when she found the device and learned about his relationship with sister-in-law Hallie Biden, a publishing insider told the Sun.

“The book admits that this was the final straw for Kathleen,” the source said.

She Found Out He Was a Sicko

“She’d tried for years to help him beat his addiction to crack cocaine and booze. But then she found out he was sleeping with his brother’s wife. She said he was a sicko.”

The book also reportedly details how Hunter went on a five-month, sex-and-drugs binge in Los Angeles after his marriage fell apart.

The epic debauchery reportedly began at the Chateau Marmont in Hollywood, where famed “Saturday Night Live” star John Belushi fatally overdosed on a heroin-and-cocaine “speedball” in 1982.

“Hunter holed up in a bungalow there and learned how to cook crack,” the source told the Sun.

“He hung out with strippers, con artists, and junkies who followed him as he moved between Chateau and sordid Airbnbs.”

The book reportedly describes how Hunter “was smoking crack and his visitors came with their own drugs, including heroin and meth.”

“He lost count of the charges they racked up on his credit cards. He calls it ‘nonstop depravity,’” the source added.

The New Yorker described how he went on an apparently different drug binge in Los Angeles after flying there in the fall of 2016 with plans to undergo addiction treatment in Sedona, Ariz.

He told the New Yorker that he didn’t go to rehab, he spent several days smoking crack he bought at a homeless encampment before finally renting a car that he crashed in Prescott, Ariz.

Hunter lasted a week in treatment before checking out and heading to a nearby spa where he was joined by Hallie and they began their affair, he told the magazine.

Kathleen filed for divorce on Dec. 6, 2016, later alleging in court papers that during a separation that began several months after Beau died in May 2015, Hunter “created financial concerns for the family by spending extravagantly on his own interests (including drugs, alcohol, prostitutes, strip clubs, and gifts for women with whom he has sexual relations).”

Their divorce was finalized in April 2017, after which he and Hallie briefly lived together in Maryland before they broke up and he moved to Los Angeles, he told the New Yorker.

Think of his children and Beau’s children who got to see all this.

Since then, he’s lost a paternity case filed by a former Washington DC stripper from Arkansas who gave birth to their daughter in August 2018.

He also married his second wife, Melissa Cohen, following a six-day romance in May 2019. They have a son, named Beau, who turned 1 on Sunday.

He’s quite bizarre and even smoked Parmesan cheese.

“Yeah, I spent more time on my hands and knees picking through rugs smoking anything that even closely — even remotely resembled crack cocaine,” Biden told CBS’s Tracy Smith in an interview that aired Sunday. “I probably smoked more Parmesan cheese than anyone that you know, I’m sure, Tracy.”

There was no mention of his seemingly corrupt financial dealings or his laptop. He left out other inconvenient things like getting thrown out of the service due to his drug problems and comments made by former partner Tony Bobulinski.

Hunter is a sleazy guy and he’s hell-bent on embarrassing his country and his father. Why do depraved people so often feel the need to pour out their souls to the world?

Then you look at the Trump children, who are so maligned, and they are successful, good people leading reputable lives. They are treated very differently.