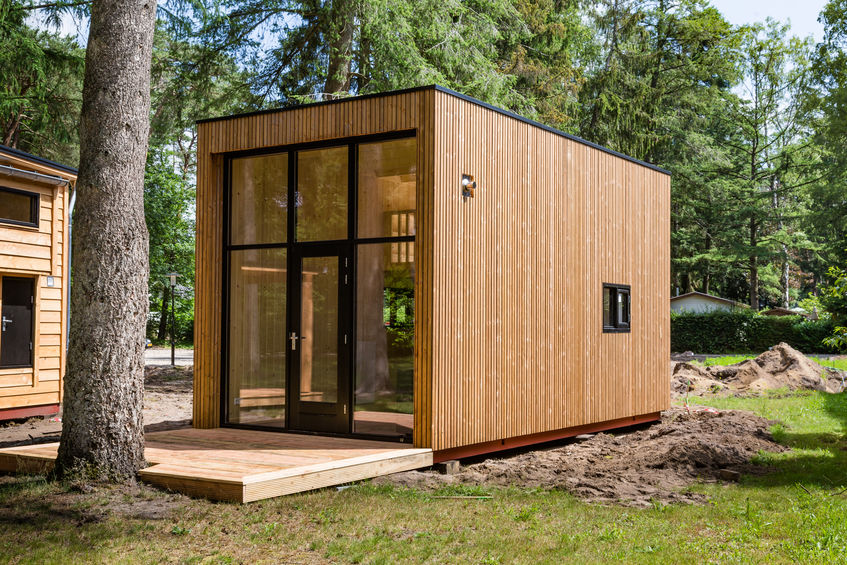 What house would you buy if you could afford to live anywhere?

For the world’s richest, wokest, and most famous, the answer is increasingly “tiny.”

The glitterati have wearied of the constant criticism they face for leading high carbon lifestyles that don’t match their high-minded Green values.

To the delight and surprise of many, the world’s most beautiful have decided to lead by example by joining the burgeoning tiny house movement. This has caused a surge in demand for the diminutive dwellings, and a commensurate crash for the white elephant properties at the top. The real estate market has been left reeling after receiving an unexpected overload of luxury listings as the woke rich dump their mansions en masse.

Tiny houses are eco-sensitive dwellings of 37 meters, or 400 square feet or less. They draw inspiration from Henry David Thoreau, who wrote Walden in 1854. Thoreau advocated simplified living with few possessions, and moved to rustic Walden pond to practice as he preached.

These climate-conscious “net-zero” cottages have developed a passionate fan base among homeowners and advocates for the poor as well. The City of Seattle announced a $1 million pledge to build tiny dwellings to house the city’s increasing population of homeless.

Now wealthy climate advocates are living their dream by moving into tiny houses and adopting Thoreau’s uncluttered Walden Pond lifestyle as their own. 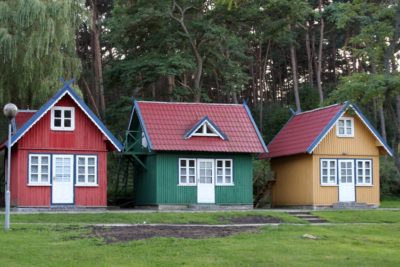 The good news is that tiny house chic comes in shapes and styles guaranteed to satisfy the dreams of those with the deepest pockets and most discerning taste. Whether you long for a rustic cottage, a classic colonial, a minimalist mid-century, a sun-kissed Mediterranean, or even a tech-laden ultramodern, there’s a tiny house for you. Have no fear. High end designers can raise a tiny houses’ fit and finish to a level which still screams exclusivity, and keeps it safely beyond the means of the work-a-day hoi polloi.

In 2014, Avril Tromper crashed boldly through the glass ceiling when the hedge fund she founded gained her a place among the world’s billionaires. “I went right out and bought not one, but two big, vulgar, pressboard palaces,” she wistfully explained. “They say it’s better to be nouveau riche, than no riche at all, but that’s a trap. The electricity we were using just to heat the pools! I wanted to walk the walk and came to the realization that four hundred square feet is enough for anyone. My heart never felt lighter than the day we moved out of that 13 bed, 17 bath monstrosity and into our new tiny home.  I don’t miss all those rooms and all that stuff. You won’t either.”

The tiny home movement is nothing new. From medieval serfs to the favelas of Brazil, to residents of tribal villages which persist today, the tiny home has long been the choice for millions.  For many, going tiny, is going home. 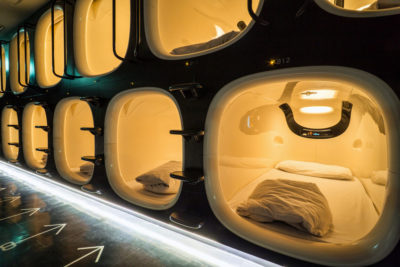 Clean lines and minimalism have dominated Japanese design for centuries. The Japanese took the concept of living small to a whole new level back in 1979, when they opened the first capsule hotel in Osaka. Capsule hotels offer the guest just enough room to lie down, which turns out is plenty.  The concept has since spread beyond The Land of the Rising Sun, to places such as Belgium, China, Hong Kong, Iceland, India, Indonesia, and Poland, proving just how fulfilling life in a small space can be.

Throughout the 1970’s, the media warned of the grave threat a new ice age would pose. Capsule living provided an elegant solution for a world urgently preparing to make do with less to survive the cold. What followed was pure serendipity. As the media shifted gears toward warming, small living advocates nimbly shifted with them, and the tiny house movement was born.

Huhtikuu Narr is co-director of the European NGO “Tiny Homes for Justice.” “It’s about time that those with the most showed us the way to sustainability by living with the least.” Narr said. “Four hundred square feet is a major step, but computer simulations show it will not have a meaningful impact on world temperature. If we want to save the planet, the Annex One nations will need to ramp up their climate ambition and achieve a goal of 350 square feet per dwelling by 2035.”

Climate justice advocates hope for yet further ambition on tiny house windows and ceiling heights. “Science clearly shows that every centimeter between floor and ceiling, every window and opening,” Narr said, “represents an existential threat to the planet. High ceilings are a holdover from colonialism.  Cathedral ceilings and excessive fenestration are genocide.”

Differences aside, the tiny house movement appears poised to heal a wound which has vexed climate campaigners since their movement was founded. The challenge up to now was convincing people with modest lifestyles to settle for less, while wealthy climate activists enjoyed an unrepentant gilded age.

The posh tried everything. They positioned solar panels on their mansion roofs in satellite view. They bought carbon “offsets.” They gave lavishly to the “Greenest” pressure groups and candidates they could find. They marched, protested and presented and received rewards in some of the world’s most exotic locales. Yet nothing seemed to work. In the end, something had to give. The exodus from the mansion to the tiny house was on. 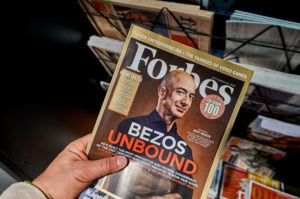 Tiny house advocates are confident that additional members of the climate elite, including some of the biggest fish in the climate pond, are poised to swell their ranks.

Amazon founder Jeff Bezos recently announced the creation of the “Bezos Earth Fund” which plans to give $10 billion to Green groups to advocate for a mandatory transition to low carbon life. Bezos has himself, however, amassed a mind-boggling luxury real estate portfolio reportedly worth $500 million.  Together Bezos properties emit more CO2 (if that’s your thing) than most of us could emit in multiple lifetimes, while the retail giant he created emits more than many an African nation.  When Jeff Bezos makes his move from mansion to tiny house, the rest of us will know we do not sacrifice for the climate alone. 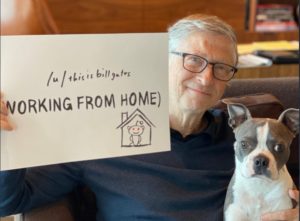 Microsoft founder Bill Gates recently released a book of climate solutions; chock full of ways we can all reduce our standards of living to save the planet. Gates himself, however, recently revealed that he flew in on a private jet to the Paris Climate Accord and is the proud owner of four luxury homes. Gates’ largest home, dubbed Xanadu 2.0, comes in at a climate-crushing 66,000 square feet and is worth a reported $154 million. Gates’ transition from “stately pleasure-dome” to sustainable tiny housing will speak volumes more than any book. 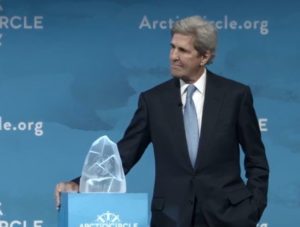 “Climate ambassador” John Kerry recently appeared flagrantly out of touch when he replied that a private jet is, “the only choice for somebody like me” after jetting in to pick up a climate award in Iceland. This brought attention to the a-list lifestyle led by Kerry and his second wife, ketchup heiress Theresa Heinz. Together they have owned fabulous homes in places like Boston’s Back Bay and the islands of Nantucket and Martha’s Vineyard.  They have enjoyed a fleet of cars, luxury yachts (including the 72 foot “Isabel” Kerry docked in Rhode Island to avoid Massachusetts taxes), and a private Gulfstream jet.  John Kerry’s tiny house will inspire more climate action than a hundred ice-shaped awards. 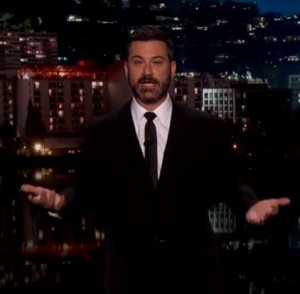 In 2008, Jimmy Kimmel purchased a 5,500 square foot luxury home in the Hollywood Hills for $6 million. The property, which contains a separate guest house / home theater, has appreciated financially ever since, but is woefully high in emissions. In 2016, Jimmy Kimmel famously featured climate scientists dropping the “f-bomb” on his late night comedy show after the premier of CFACT’s first feature film, Climate Hustle. How can the former Man Show host square his plush lifestyle with his vulgar-tongued passion for climate? Downsizing to a tiny house could be the answer.

Bezos, Gates, Kerry and Kimmel represent no more than the tip of the climate hypocrisy iceberg. Yet tiny house advocates insist that the examples they present, as they divest their mansions and go tiny, will be a climate tipping point. If Bill Gates can eat synthetic meat and downsize from 66,000 square feet to 400, they say, anyone can. 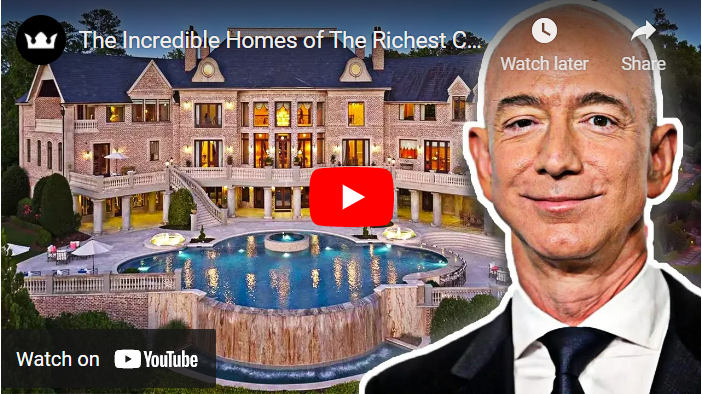