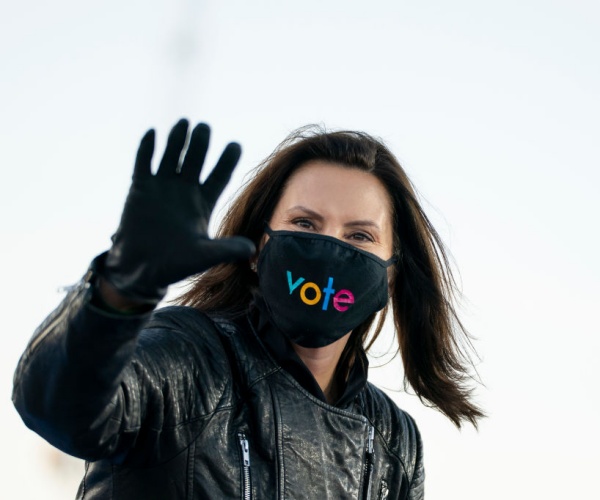 Michigan Republicans have begun working on a plan to change the state’s voting laws following their losses in the 2020 election without having to work with Democrat Gov. Gretchen Whitmer, The Detroit News reports.

Michigan GOP chairman Ron Weiser reportedly told the North Oakland Republican Club on Thursday that the party is looking to group together a number of bills that have been proposed in the House and Senate in a petition initiative, which, if it gathered at least 340,000 signatures, could be approved by the Republican-controlled state Legislature without Whitmer having the chance to issue a veto.

Senate Republicans previously released dozens of bills that would overhaul the state’s voting laws and impose widespread restrictions, including an identification requirement for absentee ballots and prevent the Democrat Secretary of State, Jocelyn Benson, from sending out absentee ballot applications without receiving a request first.

“If that legislation is not passed by our Legislature, which I am sure it will be, but if it’s not signed by the governor, then we have other plans to make sure that it becomes law before 2022,” Weiser said on Thursday, according to a video that was released on social media.

“That plan includes taking that legislation and getting the signatures necessary for a legislative initiative so it can become law without Gretchen Whitmer’s signature,” he continued.

Weiser said on Thursday that the Michigan Republican Party district chairs were recently given a briefing on legislation in the Senate that would limit ballot drop-off boxes, among other measures, and another that would force voters who lack photo identification to vote with a provisional ballot.

“The fact that Republicans didn’t win as many races as they wanted to does not justify their attempt to silence voters,” said Michigan Senate Minority Leader Jim Ananich.

Whitmer said during the Michigan Chronicle’s Pancakes & Politics event on Thursday morning, “I have a veto pen, and I am ready to use that for any bill that is looking to make it harder for people in our state to vote.”

Michigan Democratic Party chairwoman Lavora Barnes said that in 2018, 2.7 million Michigan voters cast a ballot for “the most comprehensive reform to our election system in the state’s history,” which included a constitutional amendment to allow for no-reason absentee voting, and passed with 67% of the vote.

“The voters have spoken on election reform,” Barnes said. “The MIGOP has decided to ignore the will of the voters with this ridiculous package of bills designed to make it harder to vote, especially for Black and Brown citizens.”

She added, “This is how the Michigan Republicans do business. First, they lose. Then they lie. And then they find ways to suppress the vote, because even they know that when people vote, Democrats win.”

The Michigan GOP did not respond to The Detroit News’ request for comment.