What is wrong with Jill Biden? 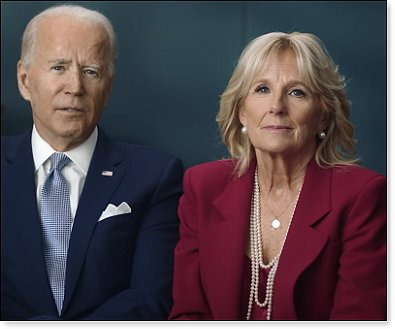 What is wrong with Jill Biden?

If this title rings a bell, it’s because it’s so similar to the title of an article I wrote exactly a year ago this month, when presidential candidate Joe Biden—visibly compromised by clear signs of cognitive failure, if not downright dementia—was being sequestered in his dimly-lit basement, surrounded by leftist toadies cranking out his occasional telepromptered statements, and guarded by wife Jill, who never failed to answer questions posed to him, finish his sentences, or whisk him away from the cameras.

In that article, I mentioned that my husband Steve had recently had a bad cold and that I had plied him with tea and honey and chicken soup (aka Jewish penicillin), and even insisted he try a folk remedy I was told was very effective and proved to be—smearing Vicks VapoRub on the bottoms of his feet (with socks put over them) at nighttime, the better to wake up with clear nasal passages and lungs.

This is exactly what takes place millions of times a day not only across the United States, but the entire world—women taking care of their husbands, doing everything possible to protect them from harm or hurt.

INITIALLY GIVING JILL THE BENEFIT OF THE DOUBT

No doubt, that was Jill Biden’s intention when she married the senator from Delaware in 1977, and raised not only the daughter they had together, but his young sons, Beau and Hunter, after the senator’s first wife and baby daughter were killed in a horrific car accident in 1972.

But before that, Jill juggled raising their three children with earning a doctoral degree in education and then teaching for years in a psychiatric hospital where her students were emotionally disturbed children and adolescents.

Surely, in both her education and clinical work, she was aware of, sensitive to, knowledgeable about—and protective of—the students whose limitations rendered them incapable of higher function. Surely she became capable of detecting, even diagnosing, thought and speech disorders, dissociative thinking, and incoherent ramblings.

The following examples during Joe Biden’s campaign were sad to witness and raised the very serious question: What is wrong with Jill Biden? 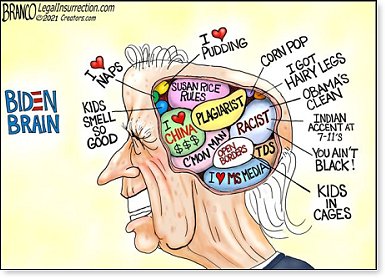 That was then. But as with all deteriorating conditions, things have now gotten worse. Right up to—and beyond—the election on November 3, ole Joe: 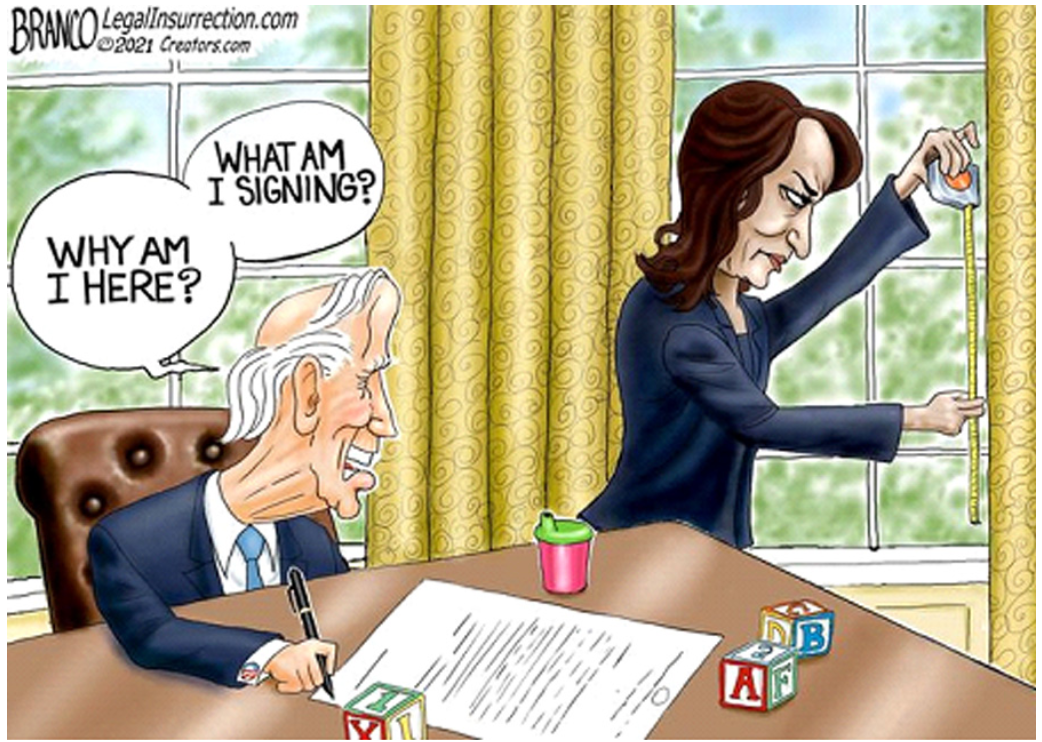 WHERE DID THAT INSIGHT GO?

Why has Jill’s understanding, empathy, and take-charge persona been missing in action when it came to protecting her clearly diminished husband from the slings and arrows of a brutal presidential contest? If Joe and Jill Biden were sitting in the office of any neurologist in America, the doctor would immediately put the candidate and now putative president on medication to alleviate his florid symptoms. (Actually, I suspect that has already been done for well over a year now, if not longer).

The Bidens claim they are practicing Catholics. Jill certainly must have taken her wedding vows seriously: “I, Jill Stevenson, take thee, Joseph Biden, to be my wedded husband, to have and to hold, from this day forward, for better, for worse, for richer, for poorer, in sickness and in health, to love and to cherish, till death do us part.…”

The cherish pledge is believable, but what happened to the “in sickness and in health” vow? Did Jill Biden really believe that it meant to “support” her clinically compromised husband in continuing the painful process of slogging it out till the November election by propping him up, ignoring the increasingly glazed and vacant look in his eyes, and witnessing his slow devolution?

Did she believe her role was to plaster on a perpetual Cheshire Cat smile before a media that collaborated with her in the “everything is great” deception, rescuing her husband when appropriate behavior failed him, and pretending that his disjointed, confused, indeed bizarre utterances somehow, magically, made sense?

Before the election and to this very day, every Joe Biden appearance has been the Emperor’s New Clothes, with the entire Democrat establishment—including CBS, NBC, ABC, MSNBC, CNN, NPR, the NY Times, the Washington Post, et al.—going along with this pitiful charade, while ignoring the fact that the American people they hold in such contempt have eyes and ears!

Jill Biden is now 69 and she and Joe are the very wealthy owners of several lavish homes and, as we know, many other sources of affluence.

By appearances, I’m guessing that Jill is also quite healthy. That is why it stretches the imagination that either she or her 78-year-old husband—who has now clearly entered the doddering stage—really wanted to spend the next four years of their lives glad-handing foreign potentates, fielding the conflicting and contentious demands of the American electorate, or generally weathering the unforgiving spotlight aimed relentlessly at the highest office in the land.

Now that the Bidens are, for the most part, secluded, isolated, essentially quarantined in the White House behind barbed-wire fencing and a preposterous military presence, the occasional sighting of Mr. Biden—like his peculiarly bug-eyed, robotic speech the other night—shows a joyless, expressionless, programmed chief executive whose only function seems to be staying vertical long enough to actualize Barack Obama’s radical agenda. The over 40 Executive Orders he has signed since the inauguration on January 20 were clearly prepared by Obama’s functionaries, most of whom have been appointed to positions of power in the Biden White House, State Department, and elsewhere. 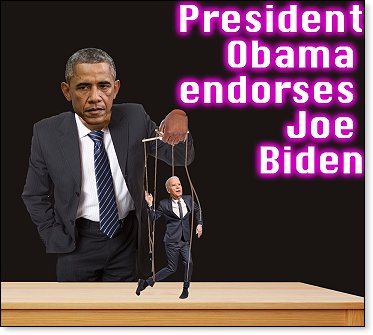 Speaking of which, I believe that Joe Biden was selected as Barack Obama’s VP because of the inherent malleability and weakness he has displayed in nearly 50 years on the public stage. The powers-that-be who orchestrated his “election” had no doubt that they could plant any idea, policy, pet project, or corrupt scheme in Joe’s ear and trust that he would follow through unquestioningly. This trust, of course, was based on Joe’s long history of echoing—actually stealing—the words of other people described in a damning series of plagiarism scandals, as well as carrying out, in his own words, menacing threats leveled at the powers-that-be in Ukraine that resulted in the result he and Obama wanted.

WHAT’S IN IT FOR JILL?

I suspect that the powers-that-be, among them brainiacs like David Axelrod, Valerie Jarrett, and especially George Soros—who appears through his massive contributions to own the Democrat Party, the Democratic National Committee, most if not all Democrat fund-raising committees, and the leftist media—got together and decided to back Joe Biden because they knew with absolute surety they could control him once he was in office.

And during the campaign, when it became clear to them—as it did to the rest of America and to the world—that a faltering Joe Biden would be lucky to make it over the finish line, they simply whispered in Jill’s ear:

Joe may never have heard these tacit threats, but if my theory is correct, you can bet that Jill heard them loud and clear and “got” the message 100%!

That message must have nursemaid Jill running scared and contemplating with horror handing over her authority and power to a woman only a handful of people ever heard of until last year.

Whoever is running the Joe Biden show behind the scenes, it is clear that he or she or they had a hand in manipulating the first African-American woman, Kamala Harris, into the Vice Presidency-cum-Presidency of the United States of America. She whose mother is a native of India and her father an Afro-Jamaican and a Marxist economics professor at Stanford University in Palo Alto, CA.

But no matter. To Democrats, who are preoccupied with race, gender, and the lifelong-victim card, narrative is all—qualifications not so much. 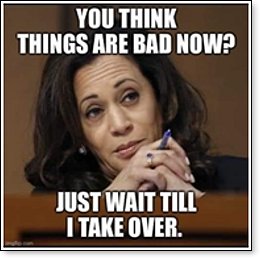 But…mmm…now that we know of the close professional ties of Kamala’s husband to the Chinese Communist Party, maybe it wasn’t the color-gender thing that got her chosen for the VP position at all. And maybe it isn’t Obama, who most people surmise is running the show, who orchestrated this fiasco.

After reading a stunning article by esteemed author and journalist Jack Cashill, I have to agree that it is not Obama who is pulling the strings of the Biden regime.

“Although clearly immersed in leftism since childhood, even Marxism,” Cashill writes, “[Obama] never left the shallow end of the pool. As president, he proved so adept at breaking promises because he did not care deeply enough to ensure those promises were realized. What mattered more was that he be seen striking the right pose, finding the right groove, spinning the right narrative. Obama is not a serious man. Never was.”

Cashill doesn’t offer a theory of who is running the show, but my guess is that Susan Rice, Obama’s Ambassador to the UN and U.S. National Security Advisor, is in the running—she who is worthy of an Oscar for her spectacular talent in embodying none of the qualities of sincerity, forthrightness, and integrity!

WHAT ARE WE REALLY LOOKING AT?

We’re looking at “open Marxists on the verge of a complete takeover of the Democratic Party,” writes Cliff Kincaid, journalist, author, and former director of the Center for Investigative Journalism of Accuracy in Media.

“Bolshevik Bernie Sanders,” Kincaid continues, “the lone Senate member of the Congressional Progressive Caucus, is poised to take over the Democratic Party, after his supporters and sympathizers engineer the ouster of New York Governor Andrew Cuomo and President Joe Biden.”

Kincaid says that “The Congressional Progressive Caucus, a Marxist-oriented group close to The Democratic Socialists of America…includes nearly 100 members of the Democratic Party in Congress. This group is driving the Marxist agenda of Biden/Harris. It claims 234 chapters around the country, one chapter in Washington, D.C., perhaps a future state, and it grew by 500 percent in one year.”

If things go their way, they will implant their own socialist-Communist-Marxist candidates of choice through their typically dishonest elections, and by so doing take huge leaps toward their goal of “fundamentally transforming” America into the kind of totalitarian state they so admire. With the help, of course—already rendered—of Big Tech, the leftist media whores, academia, the ([lack of) entertainment industry, the courts, and other major players.

But how could this be? In my decades of observing the behavior of all of the above species, it is clear that the list of those who can be bribed and threatened is endless!

Where does all this leave Jill? Certainly in a less secure place in history than Edith Wilson, who married Woodrow Wilson in 1915 during his first term as president. Interestingly, like Jill Biden, Edith was the president’s second wife. Yet more interesting is that she literally ran the country after her husband’s stroke in 1919, whereas at this point Jill seems busy running interference for her hapless, devolving husband.

WHERE DOES THIS LEAVE US?

Conservatives like me have two things in common. The first is that we look at the Big Picture, meaning a broad historical perspective. Today, there are between 75 and 80 million people who voted for Donald Trump and know American history—unlike today’s “woke” generation—and who therefore appreciate that we have been through bigger battles and prevailed.

Americans with grit, courage, and love for our country have been through the American Revolution, the Civil War, World War I, the Great Depression, World War II, an epic Civil Rights revolution, 9/11, and eight years of Obama treachery—and emerged victorious!

Yes, there are problems to solve, all of which emanate from the de facto assisted-living facility at 1600 Pennsylvania Avenue:

Inducting Jill Biden into a National Hall of Shame for the elder abuse of her failing husband may seem to pale in light of the above problems, but there are prison cells all over our country holding those convicted of extreme forms of this sort of crime. In the least, what she is doing is cruel and inhumane, plain and simple.

The second thing conservatives like me have in common is an indomitable sense of optimism, which is why we are so confident not only that these problems will be solved, but that conservatism itself will return to our country with a mighty roar. 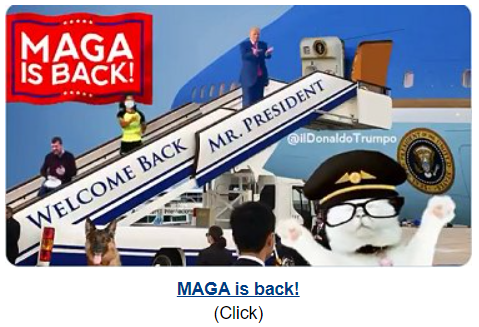