Members of Congress are seeking to pass an extreme and unconstitutional gun control bill that would effectively nullify the Second Amendment. 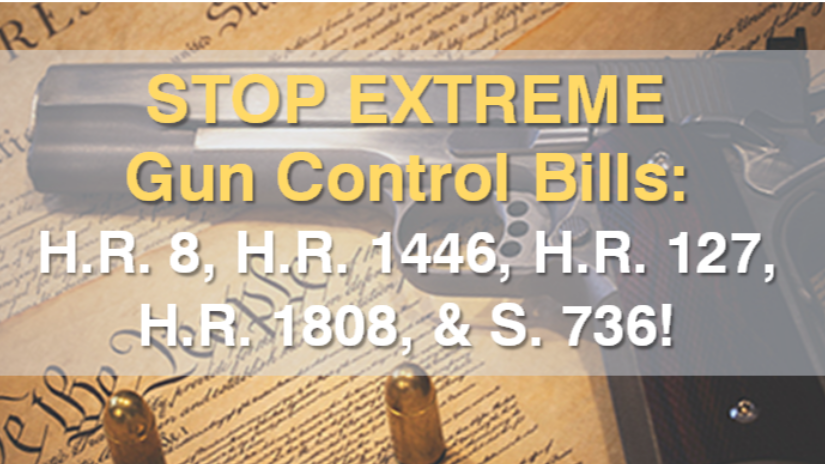 Members of Congress are seeking to pass an extreme and unconstitutional gun control bill that would effectively nullify the Second Amendment.

Members of Congress are seeking to pass an extreme and unconstitutional gun control bill that would effectively nullify the Second Amendment. The U.S. Senate Judiciary Committee has scheduled a gun control hearing for tomorrow, March 23, at 10 am EDT.

Among the bill’s other provisions, it would create a national firearm registration system that every gun owner would need to submit to. Although maintained by the U.S. Attorney General, it would be “accessible to all members of the public.” Not only this, but gun owners would need to inform the government where they store their firearms and identity any person they loan it to.

And if that wasn’t enough, gun owners would need to undergo a “psychological evaluation,” take a training course, and have “firearm insurance” that would cost $800 to obtain.

Additionally, the U.S. Attorney General would have relatively broad authority to deny, suspend, or revoke licenses. Not only this, but after only three years, one would have to renew their license – subject to taking another training course.

Additionally, Congress is seeking to pass the following other unconstitutional gun control bills:

H.R. 127 represents an assault on the Second Amendment, and if passed, it would directly infringe upon it in multiple ways. Additionally, its provisions would enable the federal government to more easily implement further gun control measures, including confiscations.

The ability of a person to defend him or herself is a fundamental God-given right. Stripping individuals of this right would make them utterly dependent upon the government for their very lives and allows it to strip them of other rights without fear of reprisal.

That is why it is imperative that we protect the Second Amendment by urging your U.S. representatives and senators to oppose H.R. 127 and any other legislation that infringes upon the right to self-defense.

The New American magazine has introduced two new shows that began airing a few weeks ago. Check out the latest episodes and view more on thenewamerican.com!

When proposed legislation infringes on our personal rights, security, or prosperity or on our constitutional republic’s independence or security, be among the first to find out and act on it.