This year’s 105-day legislative session is more than halfway completed. After focusing the first eight weeks of session on bills that originated in our own chamber, the Senate on March 9 reached the “floor cutoff,” the deadline for us to pass Senate bills, except those considered necessary to implement the upcoming state operating, capital and transportation budgets.

Now that the floor cutoff is behind us, the Senate is now holding public hearings on bills that were passed by the House of Representatives earlier this session. The House is doing likewise with Senate-approved proposals.

Due to concerns over COVID-19, Democratic legislative leaders decided this year’s session would be pretty much virtual. That means all of the committee meetings in the Senate and House have been held remotely instead of in person. It also means that when the Senate holds a floor session, only a fraction of the state’s 49 senators are physically on the Senate floor to debate and vote on bills. The rest are attending remotely from their offices at the Capitol, or from home.

I’m sad to say that holding a virtual legislative session falls far short of an in-person session in terms of openness and transparency. The virtual session has been inefficient to the point of being obstructive to the legislative process. It is harder for people to testify on bills via Zoom or other virtual means than it is in person. Citizens wishing to chat with legislators about bills or important issues at least could do so in the Capitol rotunda or outside of committee meeting rooms on the Capitol campus. But since the Capitol and the legislative office buildings are closed to the public, citizens don’t have free access to their elected officials as they did in prior years. 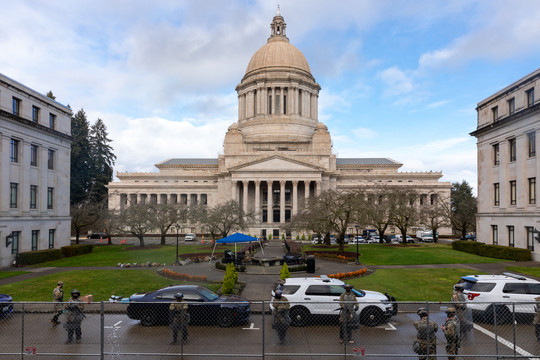 A fence and extra security can be seen around the state Capitol building.

Throughout the session so far, the public also has been blocked from having access to the open space on the west side of the Capitol Campus, where the Legislative (Capitol) Building and other legislative offices are located.  It has been disappointing to see citizens prevented from entering the “People’s House” and much of the surrounding area. But there was a little bit of good news when the Department of Enterprise Services, the agency in charge of the Capitol grounds, announced that the west campus is reopening to the public this Thursday. This will allow public pedestrian access, but access by public vehicles will continue to be restricted. 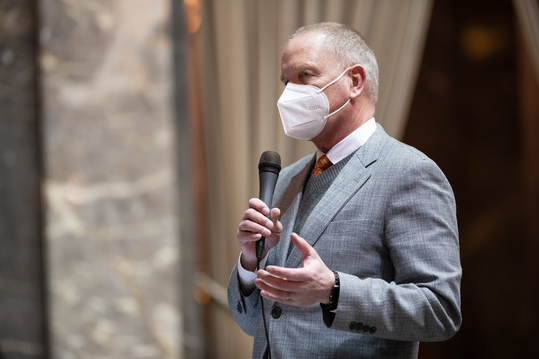 During this legislative session, other senators and I wear masks when we appear on the Senate floor.

Throughout this legislative session, Republican legislators have argued that Democrats should not try to pass Senate Bill 5096, which would create a state income tax on capital gains. (The Senate still voted 25-24 earlier this month to pass SB 5096, which now is in the House.) Our main argument has been that we don’t need more money for the state operating budget because Washington’s revenue situation already is on solid ground. Last week’s state revenue projections reinforce this point.

The state Economic Revenue and Forecast Council announced last Wednesday that the first state-revenue forecast for this year shows a surprisingly large increase of $3.3 billion through the 2021-23 budget cycle and $5.2 billion over the next four years. In other words, state government looks to be in great shape financially for the next few years.

In addition, Congress just passed the American Rescue Plan, the latest federal stimulus package to help offset economic hardships caused by the COVID-19 pandemic. The stimulus package provides our state with $1.9 billion for K-12 schools, $655 million for higher-education institutions, and $635 million for child care. Washington also will receive $7.1 billion in aid for local, county and state governments that saw tax collections fall last year due to the economic downturn caused by the virus and restrictions to stop outbreaks.

Between this week’s revenue forecast and the money our state will receive from the new federal stimulus package, there is absolutely no good reason for the House Democrats to follow the Senate Democrats on passing the state income-tax bill. Washington just doesn’t need it! Washington voters have rejected a state income-tax proposal 10 times over the past 85 years. The most recent rejection happened in 2010 when 64 percent of voters shot down Initiative 1098.

Washington moving to Phase 3 of COVID recovery on Monday

It was good news when Gov. Inslee last week announced that all of Washington could move into Phase 3 of the state’s COVID-19 recovery plan. Most of that move takes effect next Monday, March 22. For months, many of my Republican colleagues have argued that the governor’s recovery plan was too restrictive in some ways, especially in rural parts of our state. This Seattle Times story provides more information about what the move to Phase 3 means. 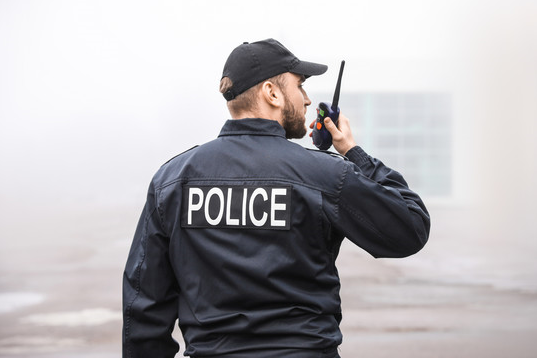 There are several bills still alive this session that could weaken the ability of law enforcement   officers to perform their jobs and to protect the public.

One of the most-discussed issues of this session has been policing reform. It’s not a surprise considering the events of 2020 that followed the death of George Floyd while in police custody in Minneapolis.

Democrats in both chambers introduced several bills this session that seek to weaken law enforcement in different ways. As a retired Spokane police officer, I understand the dangers and risks that officers face on the job. While I will never condone excessive force by officers to subdue suspects, I know that officers need to be allowed to use certain tools in order to apprehend and bring a suspect into custody.

I totally understand the frustration and anger so many people felt after watching the footage of George Floyd’s death. But passing bills to address these feelings is irresponsible if we don’t carefully consider the unintended consequences of how specific restrictions on law enforcement’s actions will compromise public safety.

Many of the policing-reform bills proposed this session are bad for public health and safety. Law enforcement wants to stop harm before it occurs and to protect our communities.  We can’t strip police officers of some of the tools they need to do this. Otherwise it will be harder for them to bring criminals to justice, less safe for officers to take violators into custody, and more likely law-enforcement officers and members of the public will be injured. 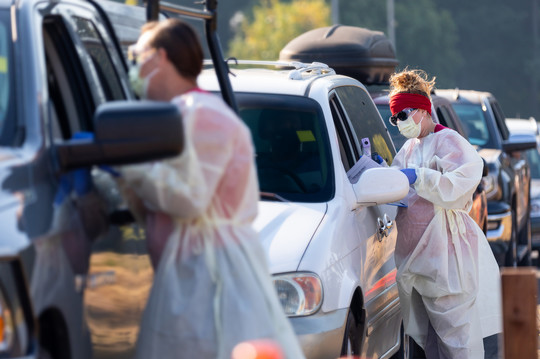 My SB 5190 would provide health-care workers with presumptive benefits during a public-health emergency. It passed the Senate and is now in the House.

Update on my bills

I’m pleased that two of the bills I prime-sponsored this session are still alive:

It is an honor to serve as your 6th District state senator. Thank you for the opportunity to represent you in Olympia.