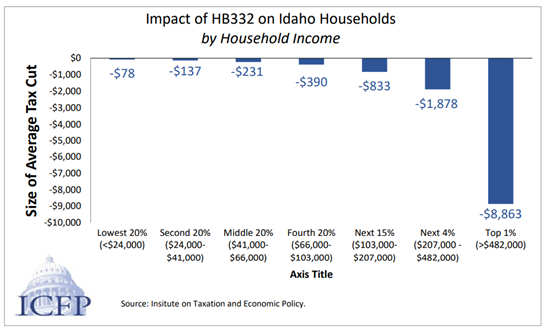 Recall in February how a tax bill, H199, proposed by Rep. Steve Harris was introduced to cut income taxes, reduce sales taxes, and remove an income tax credit.  That bill was printed and was ready for a committee hearing only to be pulled from consideration by Rep. Harris himself. It was like a groundhog tax relief bill poking its head out to see what would happen, only to retreat to the same hole it came from.  The bill had problems, namely that it would have INCREASED taxes for low income families who really needed the income tax credit part to stay in place more than they needed the small reductions in sales taxes and income taxes.  It was a miscue.

Here we go again.  This time the bill proposed by Rep. Harris and House Leadership is an even bigger tax cut bill centered on reducing income tax rates and providing one-time income tax rebate checks to Idahoans.  The bill, H332, was introduced last week, and it was rushed through both committee and the House floor in a matter of hours on Tuesday and Wednesday.

The bill cuts the top income tax rate (which nearly all income earners pay) from 6.925% down to 6.500%.  That’s a 0.425% cut in tax rates.  It also provides rebate checks of $50 per taxpayer, or a 9% refund from 2019 taxes paid (whichever is larger) to all taxpayers.  The cut in the tax rate amounts to a total of $169.4 million dollars cut from income taxes, and the rebates total to $220 million paid to Idahoans.  The chart above shows the overall impact of the new tax bill on Idaho families of different income categories.

The lion’s share of the cuts will benefit the top taxpayers–not surprising because the top taxpayers pay the lion’s share of taxes overall.  Unfortunately, the bill does nothing for business taxes and doesn’t follow popular opinion to repeal one of the most regressive taxes in Idaho–the sales tax on groceries.  We have a real opportunity this year, with over $600 million in surplus to provide strong tax relief and to also fix a real problem with our tax structure.  Idaho is one of only five states to fully tax groceries.

Since this legislative session began, I have received hundreds of emails about relieving tax burdens on Idaho families and businesses.  Almost all of them ask for tax relief in one of two forms: grocery tax repeal or property tax cuts/repeal.  Only one or two emails or phone calls discuss income taxes. Yet, it seems, H332 is the only tax cut bill the House will have an opportunity to vote for or against.  We should have all options on the table, but sadly, the system favors the leadership oligarchy who are not interested in the tax cuts most Idahoans have been asking for.

What do you think?   Should Idaho legislators support this tax cut (H332) or should we send it back in favor of grocery tax repeal or property tax relief?

When the Budgeting Process Gets Politicized 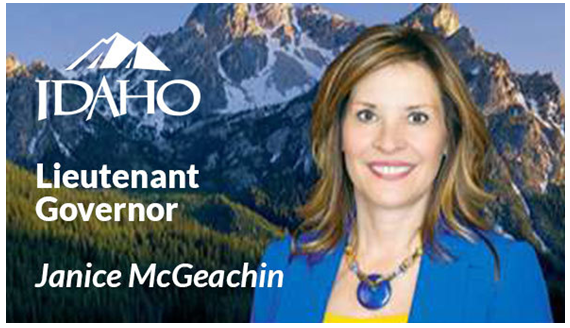 There is a controversy brewing in the Idaho Capitol over the budgeting process and the office of Idaho Lt. Governor, Janice McGeachin.  While her office sports the smallest budget of all budgets in Idaho government, some lawmakers chose to pick a fight by drafting and ramming through a budget which cut $17,000 out of her total $183,000 of spending authority.

For perspective, as sure as the sun rises every morning, the Joint Finance and Appropriations Committee (JFAC) approves every budget increase on its horizon.  Medicaid (with or without expansion) commands a staggering amount  in Idaho, to the tune of $3.7 BILLION (most of it federal dollars though).  Public schools, which are Constitutionally mandated for the state to support, amount to $2.7 billion (nearly all of it state dollars).  And higher education is not pocket change either, at $632 million.   All three of those categories saw huge increases in their budgets coming from JFAC.  This is even in spite of controversies surrounding the huge miscalculations of Medicaid expansion and the Social Justice / Critical Race Theory being promoted on Idaho college campuses.

So why would lawmakers go after the paltry $183,000 in the Lt. Governor’s budget?  Who really knows what a legislator is thinking?  But here are some clues.  During the budget hearing process, the Lt. Governor was asked about contract work she hired from an independent contractor who happens to also work at a prominent conservative think tank in Idaho.  Keep in mind, the Lt. Governor actually SAVED the state thousands of dollars by contracting out the work instead of hiring a full time employee, even though she had the spending authority to do so. Apparently, saving the state money is less important than how it’s actually done.

After the budget was approved–with the $17,000 cut applied–the main sponsor of the budget motion said, “Well she (the Lt. Governor) says she is a conservative, she should be able to handle a $17,000 cut.”  That doesn’t sound like the lawmaker was really interested in pinching pennies, but more like him wanting to score some political points.  After the budget was approved by JFAC, the bill went to the senate but was called back to JFAC by the chair.  The Lt. Governor was invited to come back to the committee to discuss her budget again.  Instead of a fair and balanced discussion though, the Lt. Governor was grilled again about the contract work, and also about statements she made expressing displeasure over the budget cuts approved by the committee. I guess she is just supposed to accept political budget cuts, smile, and keep quiet.

It was a disappointing and disrespectful display.  Our Lt. Governor deserves respect for the work she does and for the fiscal prudence she exhibits.  (She also agreed to a 5% budget holdback during the COVID scare, when she wasn’t required to.)  Before this session ends, I hope to see the Lt. Governor’s budget restored, and amends made to her for the unfortunate mistreatment she endured at the hands of some of the JFAC committee members. 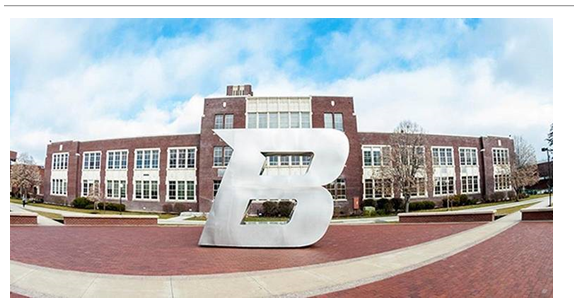 It’s official, Boise State University admits to systemic Social Justice / Critical Race Theory problems on campus and how some students are being targeted.  They shut down all their University 200 class sections, and instructed students on how to file grievances and complaints about mistreatment they may have endured in those courses or elsewhere on campus.

The Idaho Statesman reports: “The suspension affects roughly 1,300 students in 52 sections of UF 200: Foundations of Ethics and Diversity, according to the university… The course is required for graduation and designed to engage students in “discussions of ethics and diversity in contemporary societal issues,” according to Boise State’s website.  About 35 faculty members were teaching UF 200 courses during the spring semester, which can examine ethics and diversity issues in topics including the American dream, the refugee crisis, hospitality, hip hop, technology, education, food in the U.S. and literature.”

This comes just days before the Idaho House is set to vote on university budgets.  The budget from JFAC, for consideration, supposedly cuts $409,000 from the BSU budget, but after looking at the entire appropriation, S1179, it’s easy to see the entire bill includes nearly $50 million more across the four universities/colleges for a total of over $631 million.  No doubt, the House will choose to reconsider the budget as more and more information comes in about the growing problem of Social Justice indoctrination and intimidation on Idaho campuses.  Estimates for the costs of unnecessary and biased content, activities, and programs ranges from $2.5 million to over $18 million across the four schools, with BSU presenting most of the problems.

Every vote your legislator makes offers insight into their beliefs, principles and willingness to follow the constitution.  Below is a link to a website that tracks Idaho legislators’ votes, and scored them.  How do your legislators rate?  Click below to find out!

Hot Issues: Please give me your feedback

Constitutional Amendment on Drugs:  House Joint Resolution, HJR4, would put on the ballot in 2022 a question to amend the Idaho Constitution.  The amendment would make it more difficult (nearly impossible) to make drugs on the Schedule I and Schedule II lists become legal.  These schedules are in Idaho statutes and include opiates and marijuana.  They also include drug-like items including CBD oil and Industrial Hemp.  The resolution includes new language for Article III, Section 26 of the Idaho Constitution requiring a 2/3 majority of each Idaho chamber (House and Senate) to remove/legalize a drug already on the schedule.  This would be the only part of Idaho statutes requiring a 2/3 majority to change.

Do you thin we should ask to amend the Idaho Constitution to make it more difficult to legalize marijuana and other types of drugs on the Schedule I and II lists?

Ballot Initiatives Bill to Include More of Idaho:   There is a bill making its way through the Capitol to make sure ballot initiatives have the support of rural Idaho and not just the population centers like Boise, Nampa, and Coeur d’Alene.  Senate bill S1110 raises the threshold for a ballot initiative to make its way onto the ballot from getting signatures of at least 6% of voters in 18 districts to be 6% of voters in all 35 legislative districts.  This will ensure that people from all over Idaho will need to be minimally supportive of putting a question to voters to change Idaho law.

Do you agree with expanding the initiative process to require all 35 districts be included in the petition to put a question on the ballot?

Interim Committee on Property Taxes:  House Concurrent Resolution, HCR15 appoints a committee to, “…undertake and complete a study of the property tax system in Idaho, including expenditures of property tax revenues. The principal goal of the committee shall be to make recommendations that provide Idahoans with property tax relief, encourage economic development, and meet the needs of local units of government.”  The cost of convening the committee is estimated to be $15,000.  This may sound like a great idea, but keep in mind, this committee was also approved and put to work in 2015, 2019, and 2020.  With three years of work under its belt, it’s surprising that no real property tax relief has been realized.  Do we really think another year, and another $15,000 will suddenly bring the promised results?  I voted NO.

Thanks to Rep. Palmer for introducing this needed legislation.  Do you think Idaho needs these extra funds for roads this year and into the future? 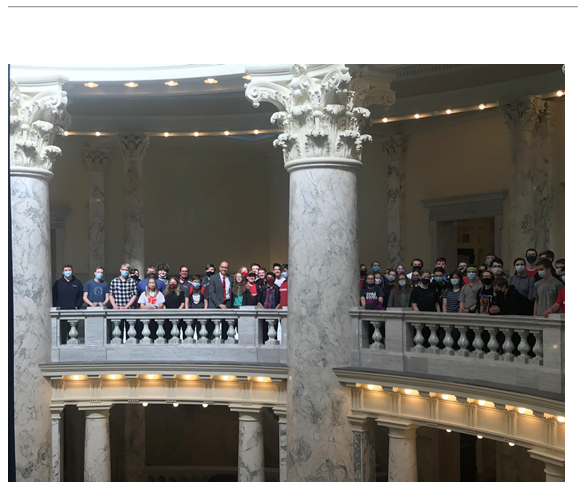 Two weeks ago, I had the pleasure of visiting with the Madison High School Pep Band.  They were in town to support the MHS Boys Basketball Team in the State Basketball tournament — MHS won third place!!  The MHS Band was treated to a lively discussion on a Sex Education Opt-In bill in the House and got a first hand look at how law is debated in the Idaho Capitol.  Then we walked downstairs to visit the garden level where the Committee meetings are held.  Here is a picture of the band, with me and my daughter who plays clarinets, in the Capitol rotunda.   The MHS Band is led by Mr. Steven Klingler–can you spot him in the picture? 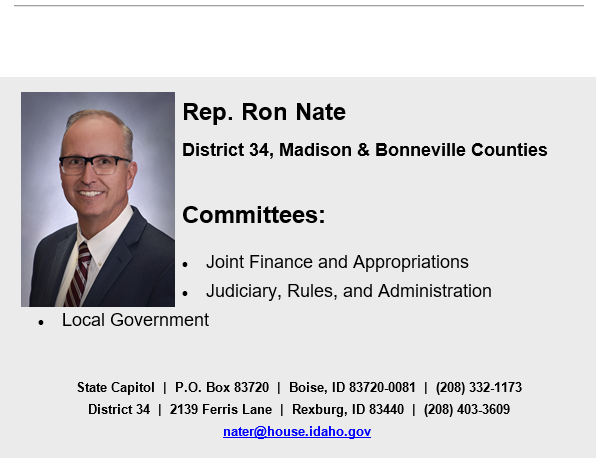