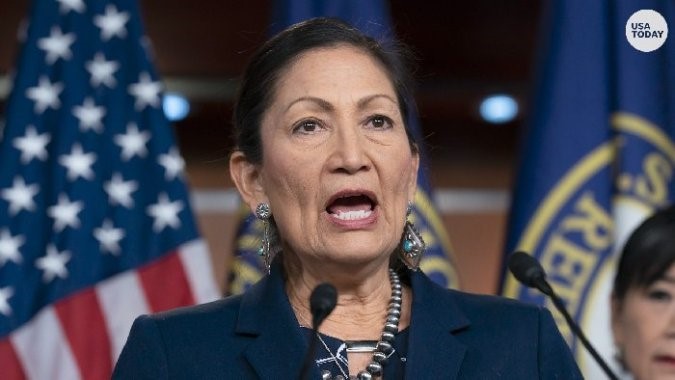 In a major blow to the legendary “pale-faced” settlers who conquered America, “indigenous Congresswoman” Deb Haaland has been confirmed as Secretary of the Interior. Writers for Politico hailed her confirmation, which came with some Republican votes, as a rebuke to “white settlers” accommodated by a government that put Indians into reservations decades ago. Haaland’s unique positions include wanting to use marijuana to fund schools.

In contrast to Senator Elizabeth Warren, Haaland is a real Indian, a member of the federally recognized tribe, the Laguna Pueblo, and claims income from casino interests designed to lure people to gamble their life savings away on tribal lands. Like alcoholism, a major problem on tribal lands, gambling is an addiction that destroys lives and families.

As disclosed by John Solomon of “Just the News,” Haaland suddenly declared, on one of her financial disclosure forms, that she had $16,000 in “salary” from the San Felipe Casino, a gambling outlet near Santa Fe run by the San Felipe Pueblo that changed its name to Black Mesa Casino.

Now determined to shut down oil and gas energy production on tribal and other federal lands, in the name of “Mother Earth,” Haaland is expected to go full throttle into the future with the same kind of “green energy” projects that failed in Texas during the snowstorm, causing at least 57 deaths.

Terminating oil and gas leases on these lands will deny her Indian people revenue in royalties that could help them escape poverty and alcoholism. They will have to depend on gambling interests or perhaps marijuana, now being marketed aggressively on tribal lands.

In 2005, a marijuana addict, Jeff Weise, massacred nine people before finally turning the gun on himself on a remote Indian reservation in Minnesota. “MJ is my gal of choice,” he said, referring to pot.

To make up for the loss of revenue from oil and gas exploration, Haaland supported marijuana legalization as a means “to diversify her state’s economy and help fund public education,” according to a pro-marijuana website.

Haaland had indicated no concern over the fact that some Indians were given experimental Covid-19 vaccines, with cries of “We are not guinea pigs” from the Navajo Nation reservation that occupies parts of Arizona, Utah, and New Mexico. Indians were targeted under the auspices of the Johns Hopkins Center for American Indian Health.

In an article emphasizing her fashionable “climate warrior politics,” leftist writer Sonali Kolhtkar said, “What makes her [Haaland] a formidable force is that her racial and ethnic background in combination with politically progressive views is antithetical to power and capital,” the latter being a reference to the free-market capitalism that was unleashed by President Trump.

Reporters ignored Haaland’s backing from Judith Le Blanc of the Communist Party, who worked through the Native Organizers Alliance and the NDN Collective to turn out voters for Biden-Harris. “We took our protests into the ballot box,” said Le Blanc. “We mobilized a historic turnout of the Native vote.”

In return, they got the Haaland nomination, a tool of extremist elements intent on dismantling America’s industrial base.

Using the China virus as an excuse, Haaland was so extreme that she had proposed freedom from prison for Leonard Peltier, an American Indian activist who was convicted of the execution-style murders of FBI Special Agents Jack Coler and Ronald Williams. Haaland called him an “indigenous rights activist.”

In regard to her casino income, Haaland had a series of tax problems that would have landed an ordinary person in an IRS audit. As a member of Congress from New Mexico, in need of scrutiny from the House Ethics Committee, she filed several amendments trying to clarify her sources of income.

But the tax problems, including the initial failure to report income from a casino, were covered-up by the major media, with Politico declaring, “Haaland’s rise from poverty to Congress and now to President Joe Biden’s cabinet ushers in a new chapter for the agency that once sought to extinguish the cultural identity of Native American who were driven onto reservations to open up vast areas of the country for settlers.”

But the printed version of the article had a different formulation, saying Native Americans “were driven onto reservations to open up vast areas of the country for white settlers.”

It is fashionable to believe that the European-Americans who settled in the United States encountered back-to-nature natives. But our ancestors who wrote the Declaration of Independence referred to “the merciless Indian Savages, whose known rule of warfare, is an undistinguished destruction, of all ages, sexes, and conditions.”

Our founders understood that some of these “savages” were ruthless killers fighting for the British against the American revolutionaries.

While it is fashionable to attack “white settlers,” Haaland’s backing from communists, casinos, and the marijuana industry was a taboo topic.

However, it is a story uncovered by analyst Trevor Loudon, who discussed it with me on an edition of America’s Survival TV. Bluntly speaking, Loudon says Haaland’s nomination “was completely orchestrated by the Communist Party of the United States.”

Politico wasn’t alone in ignoring all of this. Consider these headlines:

For the media, her backing by communist groups serving foreign interests was of no significance. Instead, her identity is what counts. She is among the “indigenous people” who have to be considered innocent victims of those horrible white people.

The Politico story drips of innuendo that Republicans who dared to question her policies were racist against a woman of color.

This is one reason why Republican Senators fold under the pressure. They don’t like to be called racists. That’s worse than being called McCarthyites.