IDAHO SENATORS SIDE WITH EDUCATION SPECIAL INTERESTS AGAINST PARENTS AND STUDENTS 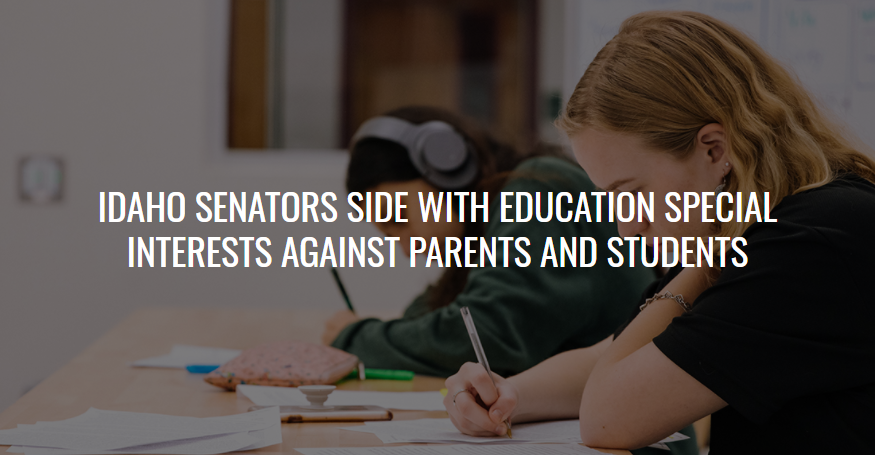 IDAHO SENATORS SIDE WITH EDUCATION SPECIAL INTERESTS AGAINST PARENTS AND STUDENTS

Special interest groups including big labor unions like the Idaho Education Association seem to be winning the day at the state Legislature, thanks to liberal Republicans and Democrats on the Senate Education Committee.

First, members of the committee rejected a simple House-approved measure to let school boards opt-out of collective bargaining. House Bill 174 would have given locally-elected school boards the ability to decide whether they wanted to negotiate with labor unions. If a union behaves badly, as happened last year when the West Ada Education Association staged a sick-out, the school board would not be compelled to sit at the bargaining table with them, as they are presently under Idaho law.

The measure had passed the House 45-25. But on Thursday, March 19, the Senate Education Committee, acting on a motion from Idaho Falls Republican David Lent, turned down the bill, siding with the status quo in which school boards will have no choice but to negotiate the terms of their surrender whenever demanded by special interest labor unions. The only support the bill found was from Republicans Lori Den Hartog of Meridian and Kevin Cook of Idaho Falls. Its defeat means even if school board members worry about the propriety of aiding labor unions as they continue to run to the Left, as has been the case in recent years, they’ll have to keep doing it. That will only embolden education unions to be vocal in their support of critical race theory, white fragility, abortion, and socialism. School boards will still have to sit and negotiate with their affiliates located here in Idaho.

Next, senators voted to gut an education savings account proposal to benefit parents of public schoolchildren. House Bill 294 would have increased the odds that parents could free their kids from the government school system and try out private schools. The bill cleared the House 47-22 two weeks ago.

But the Senate Education Committee wasn’t having any of it. Members voted to remove all the features that would have opened up dramatically new opportunities.

Left in the bill is, essentially, a government welfare program that lets some families collect $750 from the state to buy computers, software, and books. Parents might be able to make a down payment on a private education, but most would find themselves stuck in the public school system because the alternatives remain out of reach. Republican and Democratic senators joined together to supply the lifeline that the government school system needed to evade any real competition. The measure is expected to return to the House, where the chamber will get to vote on whether to concur in the Senate’s amendments. If that happens, the bill will go to Gov. Brad Little for his consideration.

All this pandering to Idaho’s education establishment is occurring as news emerges that Idaho’s high school seniors continue to do worse and worse on college entrance exams. That’s consistent with other metrics showing student performance dropping in earlier grades, across all subjects, even as Idaho lawmakers throw millions of dollars in additional funds toward the public school system.

There’s obviously a problem with government-run schools, but politicians, labor unions, and business groups plotting to protect the system are unwilling to give parents even a modicum of actual education choice. There’s a rift between conservatives and liberals in the Legislature, with the House siding with students and parents and the Senate backing labor unions and other special interests.

Make no mistake, Education Inc. is winning the 2021 legislative session. For every winner there’s a loser, and that’s Idaho’s public schoolchildren.