SUPPORT NULLIFICATION TO ENFORCE THE CONSTITUTION 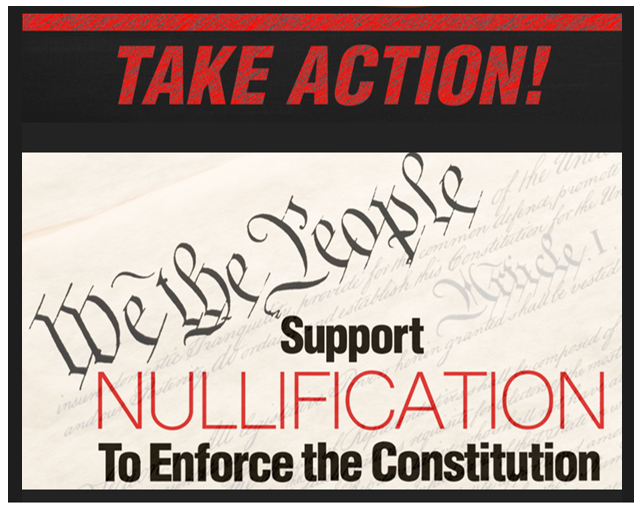 SUPPORT NULLIFICATION TO ENFORCE THE CONSTITUTION

With far-left Democrats controlling Congress and the White House, the federal government has accelerated its implementation of unconstitutional and socialist policies.

Patriots must not give up, however, as there remains much that they can still do to save our Republic and counter these radical policies. The most powerful of these tools is nullification.

Nullification is firmly grounded in the text of the U.S. Constitution, specifically Article VI. It states: “This Constitution, and the Laws of the United States which shall be made in Pursuance thereof … shall be the supreme Law of the Land” (emphasis added). This clearly implies that laws not in accordance with the Constitution are null and void.

Additionally, the 10th Amendment makes clear that all powers not granted by the Constitution to the federal government are reserved to the states and to the people. By enforcing this important constitutional provision alone, the states can push back against a significant portion of federal overreach.

There is much that state legislatures can and should do. The article “Nullification: What State Legislatures Are Doing,” published in the March 22, 2021, edition of The New American outlines some of the bills legislators should be considering and passing:

Nullification is not limited to the above topics. State legislatures can, and should, pass legislation to counter any federal government policy that violates the Constitution.

Urge your state legislators to enforce the Constitution, as originally intended, and to push back against all unconstitutional laws at every level of government by introducing and passing nullification bills.

Published with Permission of The John Birch Society