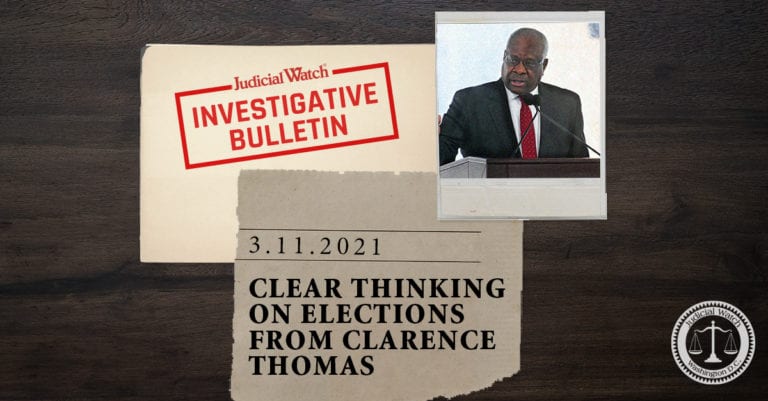 The Supreme Court shut the door on the 2020 election late last month, but Justice Clarence Thomas got the last word. In a dissent directed at the court’s decision not to take up two cases involving the Pennsylvania Supreme Court and mail-in ballots, Thomas encapsulated the world of electoral woe surrounding the 2020 presidential contest.

“We failed to settle this dispute before the election,” Thomas wrote, “and thus provide clear rules. Now we again fail to provide clear rules for future elections. The decision to leave election law hidden beneath a shroud of doubt is baffling. By doing nothing, we invite further confusion and erosion of voter confidence.”

The Pennsylvania cases centered on which state bodies have the ultimate authority to set election rules, the legislature or the judiciary?  The U.S. Constitution says that the “Times, Places and Manner of holding Elections…shall be prescribed in each State by the Legislature thereof.” But state courts often intervene.

The U.S. Supreme Court declined petitions to intervene in the case before the election. In February, with the election settled, petitioners tried again. The high court again declined to hear the cases, prompting the Thomas dissent.

It’s worth reading in its entirety. Thomas zeroes in on two key issues: legislative versus judicial power, and problems with mail-in voting.

Both “before and after the 2020 election,” Thomas notes, “nonlegislative officials in various States took it upon themselves to set the rules,” resulting in “an unusually high number of petitions and emergency applications” to the high court.

The Pennsylvania changes undermine confidence in the electoral system. “Changing the rules in the middle of the game is bad enough,” Thomas writes. “Such rule changes by officials who may lack the authority to do so is even worse.”

Thomas is clear-sighted on the problems of mail-in voting. “Voting by mail was traditionally limited to voters who had defined, well-documented reasons to be absent,” he notes. But in recent years, “many States have become more permissive, a trend greatly accelerated by Covid-19.”

The opportunity for cheating in mail-in or absentee balloting is substantial, Thomas writes. He cites a 2012 New York Times article that notes the “vastly more prevalent” risk of fraud in mail-in balloting. He cites ballot fraud cases in Pennsylvania and North Carolina. He reminds us that Heather Gerken—now dean of Yale Law School—told the Times in the same article that absentee voting allows for “simpler and more effective alternatives to commit fraud.”

At Judicial Watch, we’ve been tracking ballot fraud for years. We’ve noted that as far back as 2005, the bi-partisan Carter-Baker Commission warned that “absentee ballots remain the largest source of potential voter fraud.” In July, we pointed to California Governor Gavin Newsom’s rapid escalation of mail-in voting and reported on a New Jersey fraud case. Read the JW bulletin here.

The thanks Justice Thomas got for his rigorous dissent was to be attacked by Democrats and  the progressive media. But the complex issues surrounding election fraud aren’t going away. The country owes Clarence Thomas a debt of gratitude for his clear thinking on the coming crisis.