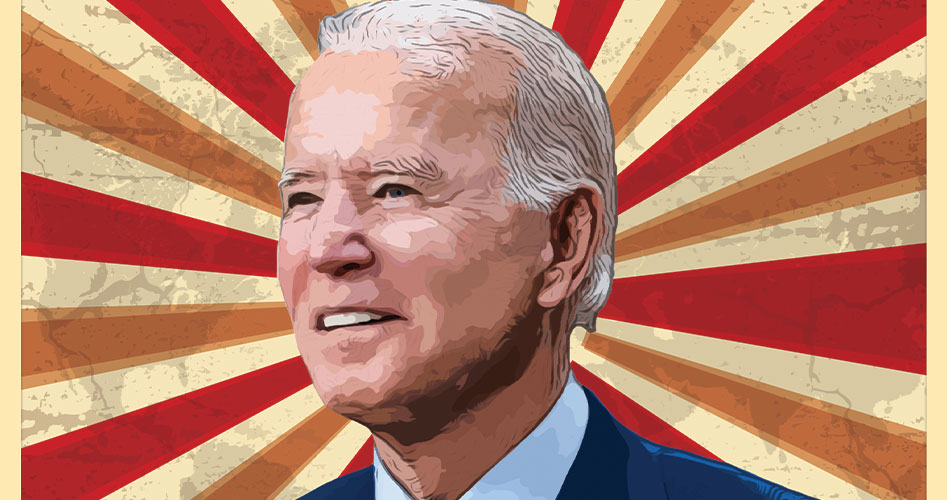 As a senator, Joe Biden wrote an op-ed called “How I Learned to Love the New World Order.” Now, as president, he is showing his love for the NWO and his hatred for the Constitution he has sworn to defend.

On April 23, 1992, the Wall Street Journal published an op-ed from then-Senator Joe Biden entitled “How I Learned to Love the New World Order.” In that piece, Biden extolled “collective security” through the United Nations and called for arming the UN with a “permanent commitment of forces for use by the Security Council.” “Why not breathe life into the U.N. Charter?” Biden asked, not mentioning that the same life-breathing action for the UN Charter would mean toxic death for the U.S. Constitution, which he has taken an oath (repeatedly) to uphold and defend. Not to mention that it would also be the death knell for American sovereignty, independence — and freedom.

Where does Joe Biden get his catchy globalist memes: New World Order, Build Back Better, Fourth Industrial Revolution, the Great Reset? Here’s a clue: They don’t spring full-blown from the feeble cerebral cortex of the president. He is a sock-puppet for the internationalist oligarchy that lusts to rule.

The Great Resetter: Joe Biden, as U.S. vice president, delivered a speech at the World Economic Forum in 2017. As president, he is pushing the WEF plan to use COVID-19 and global warming as pretexts to “reset” the entire global political-economic-social-spiritual system.

As many of our writers here at The New American have been pointing out for decades, the catchphrase “New World Order” (NWO) is a mantra used by globalist elites worldwide (including Democrats, Republicans, communists, and socialists) signifying their vision of a one-world government under the United Nations and its ancillary agencies. And as this writer pointed out in his 1992 book Global Tyranny…Step by Step: The United Nations and the Emerging New World Order, the expression “new world order” has a long history, emanating from the Council on Foreign Relations (CFR) and its British sister institution, the Royal Institute of International Affairs (RIIA), also known as Chatham House. As just one example out of many in Global Tyranny, this author cited an article from the Spring 1991 Foreign Affairs, the official house organ of the CFR,entitled “The U.N. in a New World Order.” Authored by Professors Bruce Russett and James S. Sutterlin, the CFR-promoted article especially endorsed proposals to provide the United Nations with vast new military assets and “peacekeeping” forces. This has been the stock-in-trade of globalists since World War II and the founding of the United Nations.

Of course, Biden’s op-ed in the Wall Street Journal promoting the NWO came after President George H.W. Bush had made a major splash with several high-profile televised speeches pushing the United Nations and the New World Order. In his speech to the nation and the world on September 11, 1990, Republican President Bush, a longtime CFR insider, stated: “Out of these troubled times, our fifth objective — a new world order — can emerge.” He proceeded to announce his hopes for “a United Nations that performs as envisioned by its founders.”

Comrade Molotov gave his name to the Molotov-Ribbentrop Pact (also known as the Stalin-Hitler Pact), which paved the way for the newly allied Nazi and communist regimes to carve up Europe and launch what became World War II. It was this same Molotov who worked with communist agent Alger Hiss to create the UN Charter at the critically important 1944 Dumbarton Oaks Conference. Besides being a Soviet agent of influence in the top echelons of the U.S. government, Hiss was also a member of the CFR. Leo Pasvolsky, pro-Soviet assistant to Secretary of State Cordell Hull, was the other principal author of the UN Charter. He also was a member of the CFR.

Globalists of all stripes revere the United Nations Charter and hold it up as the Holy Writ to which all humanity must bow down. They much prefer UN founders Molotov, Hiss, and Pasvolsky to U.S. Founders such as Madison, Washington, and Jefferson. In the globalist scheme of things, the UN Charter must completely supersede the U.S. Constitution (and all other national constitutions) in the quest for a world government. The late Richard N. Gardner (law professor, ambassador, and CFR luminary) wrote much on the New World Order, including his now-famous article in Foreign Affairs in 1974 entitled “The Hard Road to World Order.” Since hopes for “instant world government” had proven illusory, he wrote in that essay, “the house of world order” would have to be built through “an end run around national sovereignty, eroding it piece by piece.”

What is essential to note in all of this is that whether it’s Fidel Castro, Mikhail Gorbachev, George H. W. Bush, or Joe Biden — or any of the multitude of UN kleptocrats and bureaucrats — hymning the New World Order refrain, they are all singing the same hymn.

As noted above, Joe Biden has been on board the New World Order bandwagon for quite some time. We reported on this in The New American years ago. Biden has returned to the New World Order theme many times since, as the videos of his speeches still on the Internet clearly show. There was, for instance, his April 5, 2013 speech at the Export-Import Bank conference in Washington, D.C., in which he averred that “the affirmative task we have now is to, um, create a new world order, because the global order is changing again.”

Then there was his May 28, 2014 commencement address to the U.S. Air Force Academy Class of 2014, in which he told the cadets, “You, your class has an incredible window of opportunity to lead in shaping a new world order for the 21st century.” It was more of the same in his speech to the billionaires club known as the World Economic Forum (WEF) in Davos 2017and his special program at the Council on Foreign Relations with CFR President Richard Haass. At the CFR event, Biden and Haass discussed the article Biden had co-authored with Michael Carpenter (CFR) for the January-February 2018 issue of the CFR propaganda journal Foreign Affairs. During the introductions, Biden joked that he works for Haass. However, for those who understand the relationship, it is no joke.

Biden doesn’t only talk about the New World Order; his entire political career has been built on promoting the CFR’s NWO program, including supporting virtually every measure that increases the size and power of the United Nations. And since moving into the White House, he has begun appointing CFR globalists to the top slots in his administration. (See our companion article on page 15.)

Last year presidential candidate Joe Biden came out with his new campaign slogan: Build Back Better. The trouble is, aside from the snappy (or sappy) alliteration, the BBB slogan is not Biden’s. It is another case of Biden’s infamous tendency toward plagiarism. Except, in this case, the original authors of the slogan have no problem with being plagiarized. In fact, they have encouraged politicians worldwide to use the phrase as a mantra, as part of their push for “The Great Reset,” the globalists’ most brazen grab for total world power.

And sellout politicians from Biden to U.K. Prime Minister Boris Johnson (and many others) have climbed aboard the BBB bandwagon.

In an in-depth online article for The New American last September, Alex Newman reported on the pedigree of the “Build Back Better” meme as a catchphrase that came out of the United Nations and the World Economic Forum. It is a slogan hatched and promoted by the UN and the WEF to promote the UN’s Agenda 2030, the UN Sustainable Development Goals, the UN Paris Climate Pact — and the UN’s global health governance scheme, utilizing the COVID-19 “pandemic” for a medical world dictatorship under the UN’s World Health Organization.

Just give them absolute power and these brilliant, selfless, angelic, benevolent  beings will redesign, re-engineer, restructure — reset — the whole of our lives to save us from all our worldly woes! Just trust them! They’re smarter and better than the rest of us, and they know what’s good for us! We’ve published extensively, in these pages and online, about the insanely despotic plan of the WEF to use manufactured global “crises,” such as COVID and global warming, to seize permanent power. WEF founder Klaus Schwab and Microsoft founder Bill Gates have told us quite literally that the world can “never” return to pre-COVID normal. “Many of us are pondering when things will return to normal,” Schwab says in his book COVID-19: The Great Reset. “The short response is: never. Nothing will ever return to the ‘broken’ sense of normalcy that prevailed prior to the crisis because the coronavirus pandemic marks a fundamental inflection point in our global trajectory.”

One needn’t even be a “crazy, right-wing conspiracy theorist” to see that the megalomaniacal scheme of the World Economic Forum’s jet-setting Wall Street/Silicon Valley billionaires and their Beijing commissar counterparts to “reset” the economic, social, political, moral, and spiritual agenda of the entire planet is totalitarian to the core. Even “progressives” such as enviro-activist Robert F. Kennedy, Jr., Hollywood bad boy Alec Baldwin, feminist professor/author/columnist Dr. Asoka Bandarage, and a few other liberal-left activists have been able to see the dangers in this naked grab for unbridled power. But where are you Elizabeth Warren, Bernie Sanders, Nancy Pelosi, AOC, Michael Moore, Amy Goodman, Don Lemmon, Rachel Maddow, and the rest of you anti-capitalist social-justice warriors? Apparently the billions of dollars poured into your campaigns, companies, and NGOs by Soros, Gates, Zuckerberg, Rockefeller, Sandler, et al. have bought your silence. Like prostitutes, you have decided to keep mum about the biggest planned heist in history, in order to keep your money flowing.

In his speeches to the WEF in 2016 and 2017, Biden addressed the “Fourth Industrial Revolution,” which is the WEF’s code phrase for the wonderful new Orwellian surveillance-and-control society using artificial intelligence, advanced robotics, and the Internet of Things — all of which they have packaged as wondrous, desirable baubles under their Great Reset branding campaign. Although we are not aware that Joe Biden has personally used the term “Great Reset,” his newly appointed “Climate Envoy,” former U.S. Senator and Secretary of State John Kerry (CFR), let the wannabe world rulers know that the new administration is on board with all of that. “The notion of a reset is more important now than ever before,” Kerry told the WEF at its recent summit. “I personally believe,” Kerry said, “… we’re at the dawn of an extremely exciting time.” Exciting indeed. And extremely dangerous — potentially lethally so — to the vast majority of human beings on this planet.

The good news in all of this is that tens of millions of Americans (in addition to many millions more of various nationalities worldwide) have awakened to the fact that beneath the honeyed words of the totalitarian-minded globalists represented by Joe Biden is a malevolent plan to enslave all of humanity. And a great many of those newly awakened will no longer be silenced and cowed into group-think submission with media smears of being “conspiracy theorists.” One indication of the elitists’ alarm over this mass awakening is their increasing willingness to use overtly totalitarian means in attempts to censor, silence, and intimidate the rising waves of patriots who refuse to be assimilated as automatons into their collectivist Borg system. They want us to believe that “Resistance Is Futile.”

That is a lie. Resistance to tyranny is never futile; it is always an obligation of free men who wish to stay so. And the increasing oppression by the Big Government/Big Tech/Big Business/Big Media globalist cabal is stimulating and stiffening that resistance among millions of liberty-minded Americans.