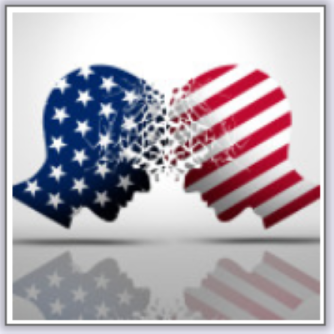 Center-right folks don’t make waves, not even when it comes to losing elections.  On the contrary, center-right Republicans are downright proud of the fact that they know how to lose with dignity.  Useful idiots like John McCain and Mitt Romney are poster boys for the lose-with-dignity crowd.

To center-right Republicans, it doesn’t matter if an election is lost because of obvious, widespread cheating.  Any comments about Democrat cheating, no matter how overwhelming the evidence may be, is strictly verboten.  RINO Senator John Thune felt so strongly about this that he said he was willing to risk being primaried for proclaiming that China Joe won the 2020 election fair and square.

While the center-right crowd in Washington continues to enable Democrats to violate the Constitution and destroy the lives of citizens they were elected to represent, Americans are expected to pretend as though Republicans are in fierce opposition to the left’s totalitarian policies.  They also are expected to take comfort in the illusion that the Senate is now split 50-50 by pretending that center-left Republicans like Romney, Murkowski, and Collins do not exist, even though these reprobates have proven time and time again that they have no problem ignoring the Constitution.

Ditto the Supreme Court, which we are constantly told has a 6-3 conservative majority.  This is, of course, a cruel myth.  Depending on the case, the reality is that the court ranges from a 5-4 conservative majority to a 6-3 Democrat majority.  A harsh reminder of this was when faux conservative justices Kavanaugh and Barrett voted with leftist John Roberts and his radical Democrat allies to refuse to hear evidence of major election fraud.  Roberts made it clear that even though sunlight may be the best disinfectant, darkness protects corrupt and cowardly men and women in black robes from the wrath of the mob.

At the same time that the Republican leadership promotes center-right wishful thinking, it also insists that Republicans must put aside their differences and unite.  In theory, it sounds like a noble thought, but in reality it’s impossible for a constitutional Republican, one who truly understands the threat posed by totalitarian Democrats, to unite with grouchy sourpusses like Mitch McConnell, Ben Sasse, and Liz Cheney.  Instead, the focus should be on primarying them.

In truth, the call for unity is nothing more than a euphemism for submission to the ghoulish agenda of Democrat totalitarians.  Republicans fall for the same Democrat con over and over again:  Make outrageous demands that cause Republicans to bray like frightened children, then, with impeccable timing, reluctantly agree to remove two or three out of perhaps ten demands as a compromise.

Republicans then pound their chests with pride, certain they have acted heroically in the eyes of their constituents.  At the same time, Democrats yuk it up behind closed doors, giddy that they have once again made asses of their Republican enemies.  (Yes, enemies.)  By endlessly and successfully repeating this con, Democrats are able to keep moving the nation toward totalitarianism.  It never occurs to center-right Republicans to go on offense, because they truly believe they are acting heroically by playing defense.

One of the main reasons they so dislike and fear Donald Trump is because he has an annoying habit of not only playing offense, but offense based on conservative principles.  This alienates totalitarian Dems no end, which is totally unacceptable to center-right Republicans who yearn for the approval of these wicked people who want to destroy them.

If you’re into psychology, it’s fascinating to speculate as to why so many Republicans pride themselves on being obedient serfs of the left.  Personally, I believe it stems from an insatiable desire to be loved.  These creampuff cretins fantasize about gaining the approval of their “colleagues across the aisle” no matter how many times their morally superior counterparts kick them in the groin.

All of which brings us to America’s last chance, the 2022 elections.  At the rate Joe Biden’s puppet masters are bombarding voters with anti-American legislation and executive orders, Republicans should be able to win a record number of House and Senate seats in 2022.  Great news, right?  Not so fast.

As every fool now knows, just because a Republican wins an election doesn’t mean the win will be acknowledged.  If the Dirty Dems manage to ram through a bill to legalize any and all forms of cheating, there will be two winners in most elections — the real winner and the declared winner.  As Josef Stalin is purported to have said, “The people who cast the votes decide nothing.  The people who count the votes decide everything.”

But let’s be optimistic and strain our imaginations to believe that Republicans will find a way to keep Democrat cheating under control in 2022.  Wouldn’t it be wonderful to see the totalitarian Dems lose both chambers of Congress in record numbers?  Indeed it would, but getting elected is only half the battle.  The question then becomes, are Republicans capable of playing offense?

Will they be prepared, on day one, to introduce legislation to overturn Roe v Wade?

Will they be prepared, on day one, to begin deportation of all people who are in the country illegally?

Will they be prepared, on day one, to introduce legislation to fund the entire border wall?

Will they be prepared, on day one, to introduce legislation to outlaw mask and social-distancing mandates?

Will they be prepared, on day one, to require voter ID and make mail-in voting and ballot harvesting illegal?

Will they be prepared, on day one, to break up the anti-American, anti-free-speech monopolies held by Twitter, Google, and Facebook?

Will they be prepared, on day one, to start prosecuting journalists, social-media executives, and politicians who knowingly spread life-threatening COVID disinformation to Americans?

Will they be prepared, on day one, to start investigating perpetrators of the January 6 insurrection hoax, starting with Nancy Pelosi, Chuck Schumer, and Eric Swalwell?

I’ll leave it to you to add another 50 or so items to the list, but you get the idea.  What Republicans should be thinking about right now is taking action to undo the Democrats’ onslaught of unconstitutional, socialist legislation and executive orders with their own tsunami of constitutional legislation in 2022.  To their credit, Democrats were ready on January 20 to immediately take the offensive, which gave Republicans the opportunity to witness, firsthand, how to play the game ruthlessly when you’re in the majority.

All the babble about the GOP being a center-right party makes me reflect on what made Rush Limbaugh so special, and I believe his most lasting legacy is that he made it unequivocally clear that he was proud to be a conservative.  Center-right was not in his vocabulary.

Attention Republicans:  Democrats don’t want to defeat you; they want to destroy you.  It’s time to wake up and get in the game!