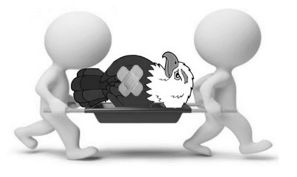 The shaft of the arrow had been feathered with one of the eagle’s own plumes.

We often give our enemies the means of our own destruction.

Some conditions never change. While Aesop lived 2,500 years ago in the 600 BC era, the simple fable messages of Aesop ring true through today. Borrowing from Aesop, our national bird, the American Eagle, is a metaphor for the internal self-destruction we citizens are doing to the United States. This introduction provides a backdrop upon which the focus of American Tribal Tyranny is occurring.  The focus is on federal Indian policy. Please note that federal Indian policies are decisions made by our federal, state and local elected officials, on behalf of tribal governments, but not by tribal governments whose only authority is over its Indian trust lands and its enrolled tribal members.

For purpose of this discussion, imagine that each feather is an American citizen, and the bird is our country, the United States.

Envision the grand American Bald Eagle soaring high through bright blue skies, with a keen eye and sense of thriving over his world. That is not happening today.  The bird is severely injured.  Take a look at the use of the feathers (citizens) of our country’s bird that are placed into arrows with United States in the crosshairs.  Here are just a few of the uses of the feathered arrows:

The above is just a cursory list. My fellow Americans have become, perhaps unintentionally, enemies of our own country. Why? It is Americans receiving actual paychecks that are putting the destructive forces noted above into action. The list is not exhaustive; there’s far more assaults on our country coming from globalists and American citizens who, for gainful employment, support socialism, communism and the demise of the United States.

Americans are piloting the chem-trail planes. Americans are installing the 5-G and radiation risks. Americans are paid to recruit illegal voters, work in abortion clinics, and create legislation that undermines the country. Federal employees are destroying farmers, cattlemen and our food production. American scientists are paid to mislead the public regarding such things as climate and gender. Americans are making good money doing bad things to our families, communities and country.

By 2016 the American Eagle (our country) had fallen from the sky, writhing on the ground:  Food and crop production decimated; manufacturing gone; military downsized and neutralized; education converted to indoctrination and  socialism; God and prayer removed from schools and public facilities; baby-killing on an upward spiral; envy, greed and entitlement replacing personal responsibility, achievement and aspiration.  Our country was like the eagle struck down by arrows launched with its own feathers.

Somehow in 2016 enough of us feathers, American citizens, saw the country’s trauma and elected a bold leader to rescue, restore and nurture our grand Eagle. The national bird is up off the ground, bleeding stopped, back on its perch, and healing to soar once again. Yet millions of Americans are infuriated with the Eagle’s rescue and rescuer.

Most of us have family members we cherish and numerous friends and colleagues we respect.  Family and friends enrich our lives. We have many of these.  We do all we can for them.  We only have one country.  One.  We do all that we can for our family and friends who live here in the United States, but we do damn little for the only country we have.

We can keep silent watching as our fellow Americans continue sending fatal arrows into our country, but for our next generation many may only know the term “American” as a historical reference to a country that used to be.

Against the backdrop of the multiple conditions described above that are eroding the prosperity and liberties in our country, American Tribal Tyranny focuses on an ill-understood, little known but rapidly escalating federal push to launch an assault on state sovereign authority by pushing tribalism as a replacement form of government across this country. While all of the debilitating arrows described above can be considered temporary and capable of change, the 200-year movement to reverse history, “decolonize” America, demean all who are not native Americans, is hitting an enormous financial and political tipping point, The need to eliminate divisive federal Indian policy and all forms of ethnic diversity is the underlying cancer preventing equal opportunity for all American citizens and the restoration of One Nation Under God.

Those who grew up believing in the United States, grateful for liberty and freedom must engage in daily efforts to keep the American Eagle soaring. Old Aesop and 2,500 years of nation births and deaths reflect what happens to countries that self-mutilate and destruct. Like another newer adage:  if we snooze, we lose.  My hope is that this book is a major alarm clock.  It’s time to wake up!

*The article above is the Introduction to Willman’s new book, American Tribal Tyranny 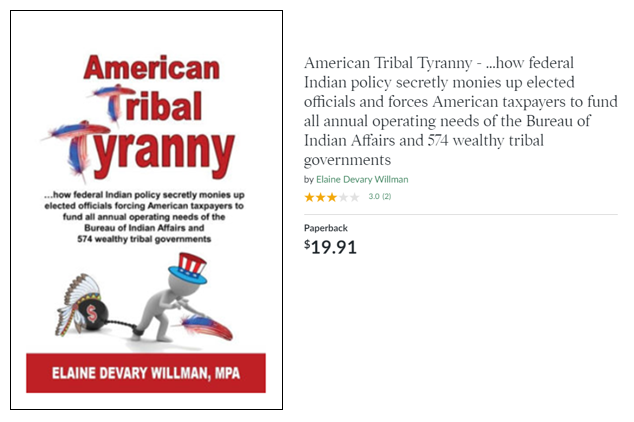 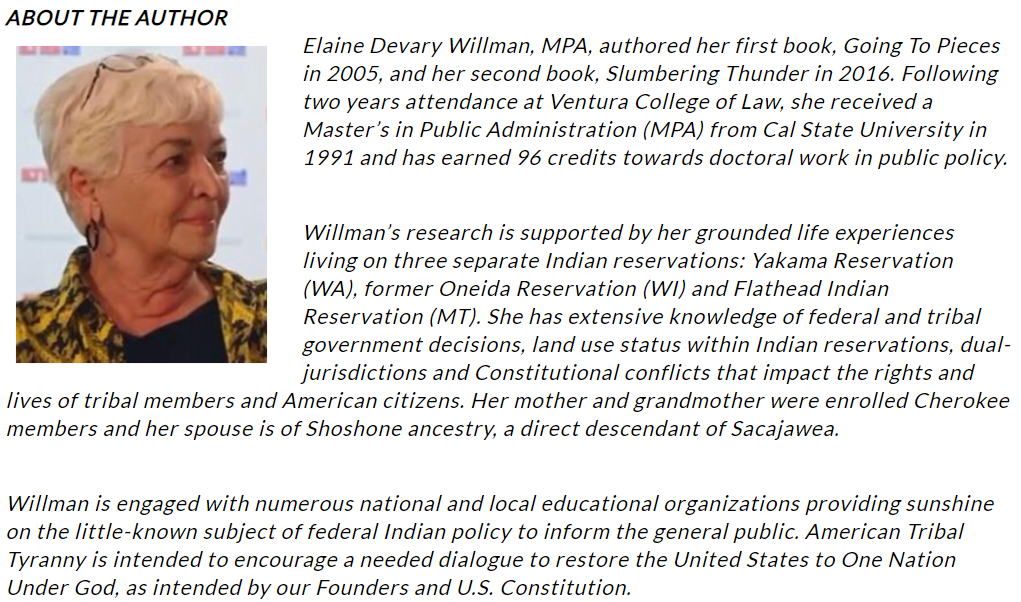