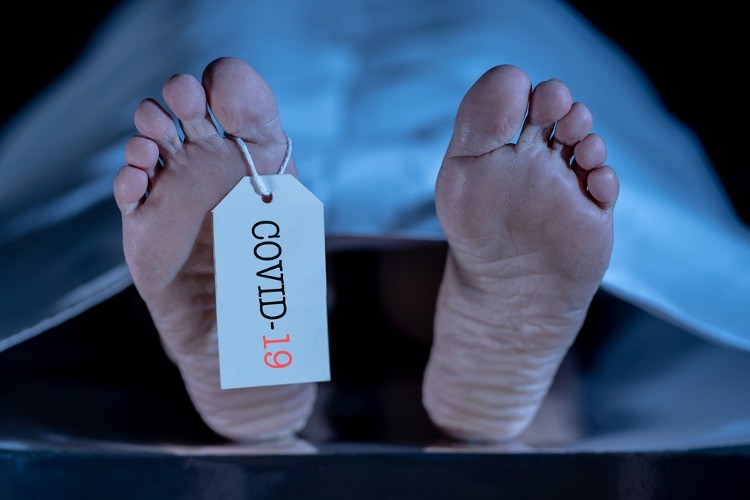 All during the coronavirus situation, masked reporters masking reality have noted, enthusiastically, every mortality milestone reached during the past year. Now it’s “500,000 Americans have died of COVID-19!” which certainly is an attention-getter. It’s also profound COVIDiocy, writes an ex-medical examiner with more than 30 years experience in death investigation. The number isn’t even remotely accurate.

After outlining his impressive résumé, that man, Dennis McGowan, explains why he calls the way SARS-CoV-2 deaths are recorded “the big lie.” He writes:

Death certificates are pretty uniform in their structure, and they call for strict accuracy in listing the relevant details. There are five critical lines on a death certificate, each having its own contribution to the final conclusion.

The first (top) line is “Immediate Cause of Death.” This is where the actual terminal event is recorded. This line is followed by three more, all labeled “Due To,” where contributors to the immediate cause, in declining order, are listed. An example of this structure might be Immediate Cause listed as Cerebral Hemorrhage, and the first Due To line might be Gunshot Wound. Very direct. In the event that there are other contributors in the cascade of Due To notations, they would follow, in descending order. Finally, there is a line called “Other Significant Conditions,” which serves as a catch-all for relevant, non-fatal items. In the example above, this line might read Severe Depression to explain why there was a gunshot wound to the head.

You can imagine how many death certificates I’ve seen in my career, but you can’t imagine the number of death certificates that are being fraudulently tallied in this current pandemic. Someone in some bureaucrat’s office decided that if COVID appears anywhere on a death certificate, it is counted as a COVID death, even if it isn’t. If COVID is on the Immediate Cause line, it is clearly a COVID death. If it is on the first Due To line, it might be a COVID death in a person with a significant comorbidity. If it is on the second or third Due To line, it may or may not have a role in the death, but if it appears in the Other Significant Conditions line, it is not a COVID death, yet it is being counted as one. An example is the fellow who crashed his motorcycle and tested positive for COVID. This is fraud masquerading as science.

In reality, it has long been apparent that the China virus death numbers are cooked. We know this based not only on the testimony of those who’ve witnessed the shenanigans, but also via reason’s application.

Consider: The New American recently reported that, in accordance with how the United States’ mortality rate has been increasing consistently since 2012, it did also rise in 2020. This translated into 334,477 more deaths that year than in 2019 — but not the at least 500,000 more you’d expect if the claimed China virus number was added on to what would otherwise be projected.

Obviously, the lower figure could be explained by way of there having been fewer deaths from other causes. Yet this seems fanciful.

First, presumably due to lockdowns’ psychological effects, rising markedly in 2020 were suicides and overdose deaths; in fact, the latter number, 81,000, was our nation’s highest ever. The U.S.’s homicide rate also jumped last year, by 30 percent, owing to tolerance for rioting and general civil unrest; this translates into thousands of extra deaths.

Moreover, with locked-down citizens not having received their usual medical treatments, from cancer screenings to general check-ups to remedial treatment and beyond, it’s hard to fathom that mortality from other diseases could have declined. It likely rose.

But we don’t have to guess. The Centers for Disease Control (CDC) reported in November that 88,280 China-virus-labeled deaths were actually caused by the flu or pneumonia, according to One America News (OAN; video below). 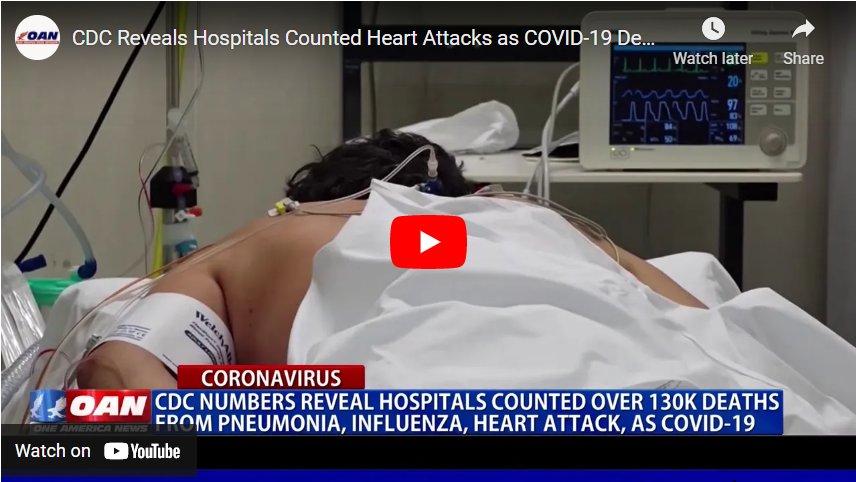 OAN also reported that the CDC tells us that 51,000 China-virus-labeled deaths were actually caused by heart attacks. In fairness, some observers claim that COVID can induce coronaries in certain individuals, which underlines the reality that people with comorbidities (e.g., heart disease) are most vulnerable; note that the CDC reported last summer that 94 percent of China virus “victims” had an average of 2.6 comorbidities.

Note further that this CDC data were reported when the “official” China virus death toll was 300,000; thus, the number of flu cases lumped into the COVID mortality figure would surely be higher now.

Many other testimonials align with the CDC’s assertion, too. Just consider a Project Veritas exposé from last May (video below), in which funeral directors claimed that health officials were “writing COVID on all the death certificates, whether they had a positive test or they didn’t,” as one put it. 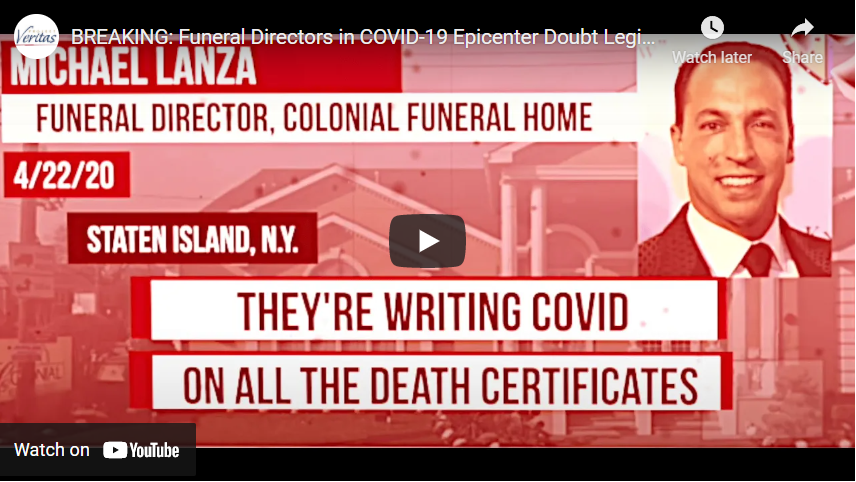 Then there was Dr. Deborah Birx, last year’s response coordinator for the White House coronavirus task force. She admitted (video below) on April 7, 2020 that the federal government was counting anyone who died with the China virus in his system as a casualty of the disease — even though the actual cause of death could have been different — and “despite other nations doing the opposite,” reported the New York Post at the time. 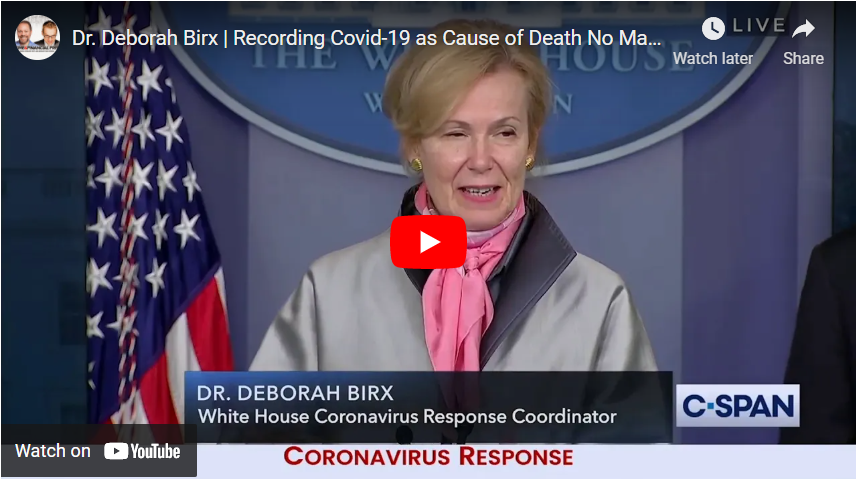 So what is the actual China virus death toll? McGowan writes that “when the publicly advertised number hit 200,000, there was speculation that the actual number could be as low as 10 or 12 thousand.” Adjusting that for the current 500,000 mortality number yields a figure of 25 or 30 thousand.

McGowan says that he’d love to evaluate every death certificate in the nation so that we could know for sure. But I wouldn’t hold my breath waiting for transparency.

After all, politicians have justified their destructive, onerous lockdowns partially by citing artificially high mortality figures. So what would happen if they admitted that there were “only,” let’s say, for argument’s sake, 30,000 COVID deaths per “cold” season, making the disease comparable to the flu? They’d first, of course, have to relinquish the emergency powers they’ve seized using corona fears.

More significantly, though, what would happen to their political careers if they admitted that they ravaged the economy and people’s lives, and caused death, all based on an illusion?