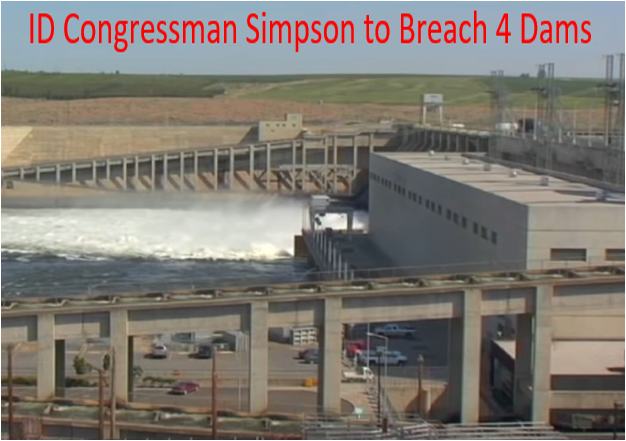 An Idaho congressman’s push to win congressional and Biden White House approval for removing four dams in the Lower Snake River in order to save dwindling stocks of salmon has ignited a firestorm in the Pacific Northwest.

Idaho Republican Congressman Mike Simpson’s dam-removal proposal is part of a $33.5 billion infrastructure package that will distribute vast sums of taxpayer money to carefully selected groups in the affected region in the hope of garnering their support for his legislation. Simpson’s plan also includes a moratorium on litigation by environmental groups, a license extension of Idaho’s Power’s Hells Canyon Complex, energy replacements for the Bonneville Power Administration, and alternatives to barge shipping on the Snake River.

In return for their support for removing the dams, the tribal councils of the Nez Perce, Yakama Nation, and Confederated Tribes of the Umatilla Indian Reservation – would be given more power in natural resources-related issues. While not happy with the litigation moratorium, anti-dam environmental groups, such as the Idaho Conservation League, back the Simpson plan. Governors Jay Inslee of Washington and Kate Brown of Oregon, both Democrats, support removing the dams.

The dams in question are located in southeastern Washington, but their removal would have repercussions throughout the region.

Idaho Gov. Brad Little, a Republican, has spoken out against the removal of the dams. “I remain unconvinced that breaching the dams is a silver bullet for salmon recovery,” Little said in a Feb. 18 statement. “Breaching the dams would have devastating impacts on Idahoans and vital segments of Idaho’s economy.”

Joining Little in opposing Simpson’s plan are several members of the Idaho legislature. Rep. Judy Boyle (R-Midvale) left no doubt where she stands. “The U.S. congressman from Idaho’s Second District has decided he doesn’t like hydroelectric energy, flood control, irrigation, agriculture, transportation from Idaho’s only Port [Lewiston], economic stability, and recreation provided by the four Lower Snake River dams …,” she said in a statement. “The issue of removal of these four dams has been studied numerous times by the US Corps of Engineers. The planned breaching proposal has been repeatedly turned down based on environmental damage to railroads, highways, and other infrastructure plus the tremendous economic harm. There has been no scientific proof that dam removal will return ocean-dwelling fish to Idaho which even the Congress sponsor admits.”

As State Rep. Boyle points out, when you remove dams, you also remove the hydroelectric power they produce. Unlike heavily subsidized wind and solar power, hydroelectric energy produces reliable power 24/7 and isn’t dependent on the weather. The loss of Snake River hydropower would have to be replaced and, given the Biden administration’s hostility to fossil fuels, that replacement would have to be wind turbines and solar arrays. Aside from being unsightly, they are intermittent and come with their own environmental problems, including what to do with the toxic waste after the wind turbines, solar panels, and their back-up batteries reach the end of their life expectancy. For people in the affected region, trading hydropower for wind and solar energy is a terrible bargain.

Breaching the dams would also put an end to commercially valuable barge traffic on the Snake River. Idaho’s timber and wheat, for example, are currently shipped from the Port of Lewiston via the Columbia River system west to the Pacific Ocean and from there to markets in Asia. Simpson’s scheme would put an end to that without a viable alternative to transporting these products.

Someone Else Feels the Pain

Governors Inslee and Brown can afford to favor dam removal; their respective political bases lie west of the Cascade Mountains along the Pacific Coast. The economic well-being of those living in the more sparsely population eastern sections of their states are of little concern to them, much less those residing in Idaho.

Breaching the dams would have no effect on the Pacific Ocean’s cyclical and unpredictable role in fish migration but would inflict economic and environmental harm on parts of the Pacific Northwest for generations to come.