We are not fighting alone! 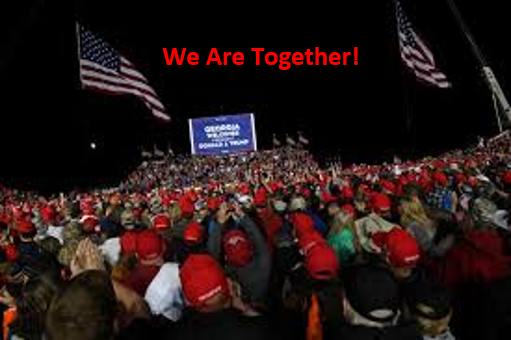 We are not fighting alone!

These are certainly very dark days for our movement and our fight for American freedom.

How do you and I stay positive and keep moving forward?

President Trump has given us two massive assets for our cause.

1) He exposed the deep state and revealed how fully entrenched and determined they are.

2) He awoke and energized millions of Americans who were never before active in our fight. They now see what you and I have known for a long time – and they want to help fix it.

Our job now is to organize and keep those new recruits active in our cause.

Remember – you are not alone. There are 80 million of us who share these principles of freedom.

Winning depends on what we do now. That’s why I’m working so hard to teach hundreds of activists across the nation how to create their community into a Freedom Pod that will spread to more communities.

Picture how different our nation would be if we dug in to create a majority of governors across the nation who understood and operated under the Tenth Amendment which gives the States the power to stand against Federal overreach.

What if you had a county commission that refused to participate in non-elected regional government?

How would your life change if your city council was made up of individuals who guided your community under the three pillars of freedom, including protection of private property, encouragement and support for local businesses to operate and compete in free enterprise, and the lifting of rules and regulations that stifled personal choices in your individual life?

After witnessing this current election crisis, don’t you wish people with Conservative values had been interested in gaining positions on the local Board of Elections?

Local government is infested with Planners, NGOs, and federal agencies dictating policies. And the only reason they have power and influence now is because the Left fought to elect representatives who then gave it to them.

So, let me give you just a brief outline of what I mean by a Freedom Pod:

1) Build a Team: To begin to push back, every public movement needs a team. Your team should include 8 parts:

2) Research – You need to know your enemy. Who are the players down at City Hall? Most of these planning groups and NGOs are operating in cities all over the nation. They have a history. What programs have they promoted, how are they funded, who are their leaders? In addition, look at your city’s comprehensive plan. What programs does it contain? Here’s a major hint to look for – is there a specific part of the city that will be affected by the plan? Where is the money to come from for enactment of the plan? In any part of the comprehensive plan do the words “protection of property rights” appear?

3) The Watchers – this is a team of three or four who volunteer to attend every single public meeting, to record what is said and who said it, determine who are the main movers in the meetings – the leaders pushing the agenda. The Watchers will soon see how the NGOs and Planners operate and note the influence they wield. This is how you determine the players.

4) The Strategist. This will be the main leader for your efforts – the coach for the team. The Strategist looks over the research, the comprehensive plan and the players and begins to develop your approach to fight.

5) The Agitators. These are the people who will be your spokesmen to address public meetings, and present your oppositions and your case. They will coordinate as a team to assure their position is presented in a powerful and effective manner.

6) The Victims. These are the people whom the promoters of these policies fear most. The people who will be most affected and, perhaps, damaged by those policies. Get them in front of elected officials with a compelling story or their plight.

7) The Media Team. Two or three people to stay in constant touch with your local news media. You must build a relationship with local reporters so they will come to rely on your information for stories. Don’t fear the media. Talk openly with them. This can also include helping citizens to write effective letters to the editor. Make your side heard.

8) The Team of Activists. These are the people who will show up to do the grunt work, rally, carry signs, protest in front of City Hall or pack the Council Chamber when you need a show of support.

Social Media Team. If you’ve got some young people on your team this is right up their alley. Develop a website where you can get the word out. Start an online petition concerning a policy you are targeting. You may find that local officials are watching to see if it grows.

So, if you want to transform your community into a Freedom Pod you must start from scratch. No position is too small to consider.

Simply focus on making these goals a reality in your community and, if successful, as prosperity spreads, the idea will certainly spread to a neighboring community, and then to the next. The challenge is to create a successful blueprint and a cadre of dedicated elected representatives that will begin to move into the state level of government. That will set the stage for effecting a federal government as conceived by our forefathers. The result will be the establishment of Freedom Pods across the nation.

This is what I have dedicated all my efforts to bring into reality – a free nation made possible through our very own communities.

My American Policy Center (APC) has created the Local Activist Handbook to provide guidance to help you get started.

APC is currently producing a series of training webinars featuring some of the top activist experts in the nation. Six have already aired.

And right now, I am working directly with activists and elected officials in several communities who want to be the first Freedom Pod models.

We are moving forward with this plan and it’s gaining steam!

What other choice do we have? The Left controls government at the federal level. Fighting on the local level will give us the ability to push back!

No other organization is providing such a straight forward plan to fight back. This isn’t just empty rhetoric – real activists and real elected representatives are beginning to take up this fight – because it is a sound plan.

I hope you will get active and begin the effort to create a Freedom Pod in your community. But I also hope you will help APC financially so we can keep organizing and building this plan. Without your support I can do nothing.

Now, let’s go out and build our base, change the debate in your state legislatures and city councils … and take America back!