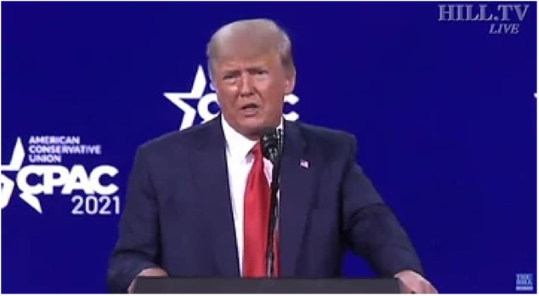 At a time when Joe Biden, the alleged 80 million vote-getter in the 2020 presidential election can barely get 800 viewers for a news conference, former President Donald Trump’s speech to CPAC nearly broke the internet.

Maybe it is because we are at what may be the end of the internet in South Florida, but we lost the livestream on Fox and CSPAN and finally found a good signal through The Hill’s feed from Right Side Broadcasting Network, the rising conservative newsfeed.

The bomb line of the speech was, “Who knows, who knows, I may even decide to beat them for a third time, OK?” the president said to the pumped-up crowd, which exploded into raucous cheers at the prospect of Donald Trump running again.

For the most part President Trump stayed focused on the future, and perhaps the most newsworthy comment he made was to shootdown the idea of starting a third party, declared he would remain a member of the Republican Party and forcefully denying reports that he is thinking about starting a new “Patriot” political party. He told fellow Republicans that he will “continue to fight right by your side.”

But he wasn’t exactly a shrinking violet when it came to those alleged Republicans who want to abandon Trumpism.

“The Republican Party is united,” his prepared remarks read. “The only division is between a handful of Washington DC establishment political hacks, and everybody else all over the country.”

But the most important part of President Trump’s speech was his critique of the policies of Joe Biden and the congressional Democrats.

Over the past five years Donald Trump has made the point time and again that the reason he won in 2016 was because of the Democrats and their policies. And without using those exact words he pointed Republicans in that direction for 2021 and beyond.

Trump hit Joe Biden for “the most disastrous first month of any president in modern history” and he ticked-off a list of issues for Republicans to run on in off year elections in 2021 and the congressional midterms in 2022, including immigration, energy, and school lockdowns.

“We all knew that the Biden administration was going to be bad – but none of us imagined just how bad they would be, and how far left they would go…” said the former President.

“Joe Biden has had the most disastrous first month of any president in modern history. Already the Biden administration has proven that they are anti-jobs, anti-family, anti-borders, anti-energy, anti-women and anti-science. In just one short month, we have gone from America First to America Last,” the ex-president said.

“There’s no better example than the new and horrible crisis on our southern border, we did such a good job. Now he wants it all to go to hell. When I left office just six weeks ago, we had created the most secure border in U.S. history,” he continued. “The wall’s been amazing, it’s incredible and they don’t want to complete it.”

And adding: “Biden’s radical immigration policies aren’t just illegal – they are immoral, they are heartless, and they are a betrayal of our nation’s core values.”

Trump called on Biden to reopen schools as scientific evidence mounts that closing them in response to the coronavirus pandemic was without a scientific or medical basis.

“Biden has failed in his number one duty as chief executive: enforcing America’s laws. This alone should be reason enough for Democrats to suffer withering losses in the midterms, and to lose the White House decisively four years from now,” he added, prompting loud cheers and a standing ovation from the crowd.

The former president’s prepared remarks came back to other central themes of his “America first” agenda by insisting: “We believe in standing up to China, shutting down outsourcing, bringing back our factories and supply chains, and ensuring that America, not China, dominates the future.”

The CPAC straw poll showed 55 percent of people polled picked the former president to vote for should he run in the 2024 election. Florida Governor Ron DeSantis came in second with 21 percent. In comparison, the next closest person was South Dakota Gov. Kristi Noem with four percent of people saying they would vote for her in the 2024 Republican primary. Former Secretary of State Mike Pompeo, Texas Sen. Ted Cruz and Kentucky Sen. Rand Paul all received two percent.

Naturally, the establishment media gave a lot of play to Trump’s critics in the pre and post-speech commentary, but it was pretty clear from the reaction at CPAC and online that the people who do the real work in Republican politics, the grassroots conservative activists, are nearly 100 percent on board with Trump’s policies, even if less that 100 percent would encourage a 2024 Trump campaign, and that Trumpism is now the dominant force in Republican and conservative politics.

George Rasley is the Editor of Conservative HQ.