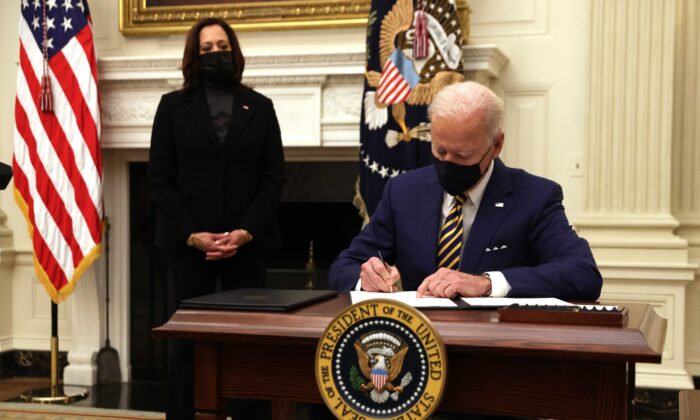 President Joe Biden signs an executive order as Vice President Kamala Harris looks on during an event on economic crisis in the State Dining Room of the White House in Washington Jan. 22, 2021. (Alex Wong/Getty Images)

The president of a Catholic civil rights organization on Feb. 22 released a scathing rebuke of the so-called Equality Act introduced by Democrats, saying it promotes “the most comprehensive assault on Christianity ever written into law.”

Bill Donohue, president of the Catholic League for Religious and Civil Rights, said in the release that the “patently anti-Christian” legislation would allow “gay rights to trump religious rights.”

He said that although the act claims to be about “ending discrimination,” noting that it may indeed be the intention, the repercussions would effectively secularize religious entities and force adherents to violate religious codes of conduct.

“Healthcare providers would be forced to provide hormone therapies and surgical procedures that are required to change the physical characteristics associated with sex changes,” Donohue noted, asking if anyone would be allowed to object, or point out the “long-term physical and mental problems associated with sex reassignment.”

“What about parents who learn that their child wants to switch his or her sex?” he added. “Will their rights be respected or eviscerated?”

He voiced concern over the loss of women’s rights due to the building up of “biological males who identify as female.”

“Boys and men would be allowed to compete in sports with girls and women, thus unfairly altering women’s athletics,” he said. “Females would also lose their privacy rights. These biological males can use the locker rooms, restrooms, and shower facilities that have always been reserved for females.”

He added that religious groups would be prohibited from objecting.

“Catholics, evangelicals, Orthodox Jews, Mormons, Muslims, and many other religious communities could not raise religious liberty objections to any of the aforementioned rights of transgender women.”

Donohue highlighted the incompatibility between the Catholic faith and the proponents of the legislation.

“It is hard for the public to understand, especially Catholics, why such allegedly ‘devout Catholics’ as [President Joe] Biden and [House Speaker Nancy Pelosi (D-Calif.)] would want to champion such patently anti-Christian legislation as the Equality Act.”

The Catholic League said that it’s getting in touch with Congress over the bill.

Last week, Lila Rose, founder and president of the pro-life organization Live Action, made similar statements with respect to abortion.

Rose, said that Biden professes to be a “devout Catholic,” but the religion carries clear and repeated messages that protect the sanctity of life.

Rose, herself a Catholic, said Biden is using Christianity as a cover for his radical abortion agenda.

“The president is using the Christian religion as a cover for his extreme policies and his promotion of abortion. And that is simply the worst kind of lie. It’s the worst kind of violence, it’s what needs to be exposed.”

She says Biden has denounced his past support of the Hyde Amendment, legislation that took effect in 1980 to prohibit federal funds from being used to perform abortions, with exceptions for life-saving situations or pregnancy resulting from rape or incest. The new administration also has rolled back the so-called Mexico City policy, which had banned providing U.S. taxpayer funds to groups that offer abortions or abortion counseling.

Kansas City Archbishop Joseph Naumann said in a recent interview that Biden should acknowledge that his support for abortion contradicts his professed Catholic faith.

“The president should stop defining himself as a devout Catholic, and acknowledge that his view on abortion is contrary to Catholic moral teaching,” Naumann said.

“It would be a more honest approach from him to say he disagreed with his Church on this important issue and that he was acting contrary to Church teaching,” the archbishop added.