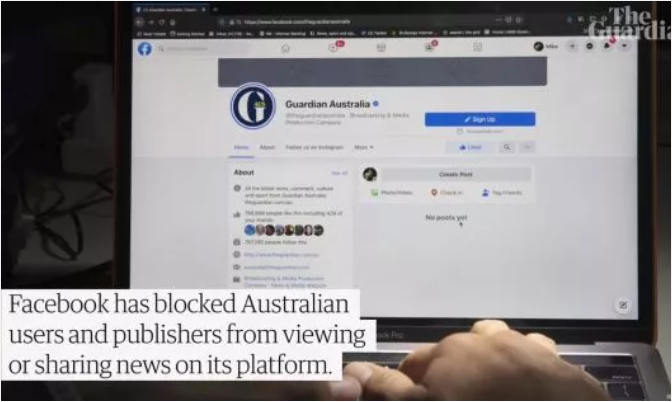 To give an idea of just how powerful and arrogant the leaders of the social media giants have become Facebook founder Mark Zuckerberg has decided to attack Australia after the Australian government decided that Facebook could no longer steal content from Australian media companies.

Facebook blocked all news content for users in Australia last week in the face of a proposed law that would force it to pay news publishers for displaying their content. Facebook, angry about proposed legislation that would force it to pay media companies for the content shared on its site, wiped clean Facebook pages around Australia. The country’s 17 million users woke on Thursday morning to find they could no longer post links to any news items — either local or international.

Australian media companies had their Facebook pages stripped of all content. Also wiped were Facebook pages run by science organizations, hospital, charities and even domestic violence support groups, observed Richard Glover in an op-ed for the Washington Post.

As Politico’s senior tech reporter Nancy Scola observed, the move provided instant fodder for those in the U.S. who say Facebook is too big, too powerful and verging on ungovernable — the very concerns that prompted federal and state regulators to launch an antitrust suit against the company late last year.

Ms. Scola reported Sen. Mark Warner (D-Va.) called the move “an unacceptable bullying tactic that only underscores concerns with their market dominance.” Warner has called for Facebook to take more responsibility for posts and ads on its 2.7-billion-member platform.

“It’s worrisome that large tech companies — which routinely tell policymakers they acknowledge the need for regulation — continually resort to using their large scale and dominance to undermine democratically adopted laws,” Warner said in a statement.

The Democrat-controlled House antitrust subcommittee announced the latest step in its long-running investigations into the tech industry — a series of hearings to consider new antitrust laws. That same day, the House Energy and Commerce Committee announced it is pulling in Zuckerberg, Google CEO Sundar Pichai and Twitter CEO Jack Dorsey to testify next month about misinformation on their platforms, reported Ms. Scola.

“That the whims of Mark Zuckerberg are so consequential for an entire country helps underscore the stakes in taking on Facebook and Google, while that is still possible,” said Jeff Hauser, director of the advocacy group Revolving Door Project, which has been critical of Facebook’s political power.

“If a country with a population less than one tenth of ours can fight back against Facebook, why can’t the USA?” Hauser asked, according to Ms. Scola’s reporting.

Mr. Hauser of the Revolving Door Project asks the essential question, and we have one obvious answer: About 98% of political contributions from internet companies this cycle went to Democrats, according to the Center for Responsive Politics.

And Mark Zuckerberg and his wife were essential contributors to the Democrat scheme to defeat Donald Trump through what were arguably illegal administrative changes in election law and procedures, such as administratively implemented universal mail-in voting, ballot drop boxes and race-based government get-out-the-vote efforts.

In his op-ed for the Washington Post, Richard Glover said for “those who have long argued that Facebook is too powerful, too ubiquitous and too bellicose when it comes to regulation, Zuckerberg has just proved them right… It’s now the turn of Big Tech to be bent to the human will. We need to keep the good and dump the bad. We need to demand it pays its way. And the world shouldn’t let plucky Australia stand on its own.”

We agree with Mr. Glover; when an arrogant Tech Lord feels empowered to vindictively attack a sovereign government then we know the tech industry must be brought to heel before it strips all of us of our liberty.

The toll-free Capitol Switchboard is (1-866-220-0044) we urge CHQ readers and friends to call their Senators and Representative to demand they act to rein-in Big Tech.

Published with Permission of Conservative HQ.com