No Proof January 6 Was an ‘Armed Insurrection’ 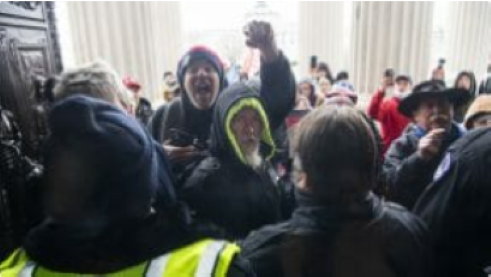 No Proof January 6 Was an ‘Armed Insurrection’

Since the Justice Department launched its nationwide manhunt to track down and arrest anyone involved with the Capitol breach on January 6, hundreds of perpetrators have been arrested.

Most face misdemeanor charges for trespassing or disorderly conduct, but dozens are in jail and denied bond for the thoughtcrime of believing the 2020 presidential election wasn’t on the up-and-up. The acting U.S. attorney general overseeing the investigation promises to apprehend hundreds more, however, it’s been two weeks since authorities have arrested anyone in connection to the probe.

Almost as embarrassing as the bad behavior of a handful of Trump supporters that day is the conduct of the national news media and Washington lawmakers. The country has been subjected to a public group therapy session of sorts wherein grown adults—Republicans and Democrats alike, elected to defend the country at all costs—now recount their harrowing experiences on January 6, which include running away from no one in particular or insisting, without evidence, that they were on the verge of being “murdered.”

The media continue to promote any number of fabricated storylines intended to bolster the laughable narrative of an “insurrection” occurring at the Capitol. The concocted account of the death of Capitol Police Officer Brian Sicknick recently fell apart; the New York Times, after pressure from outlets including American Greatness, effectively retracted its January 8 article claiming Sicknick was killed by a fire extinguisher at the hands of Trump “loyalists.”

So now it’s time to straighten out another twisted tale animating the folklore of January 6: The idea the random chaos amounted to an “armed insurrection.” Hundreds of crazed Trumpists carrying deadly weapons, the public believes, stormed the Capitol to injure or kill senators, representatives, and even Vice President Mike Pence in order to avenge a “stolen” election.

Most news outlets—as they did with the coverage of Sicknick’s death—unflinchingly repeat the “armed insurrection” trope, which can be traced back to House Speaker Nancy Pelosi’s January 7 press conference. “[Y[esterday, the President of the United States incited an armed insurrection against America, the gleeful desecration of the US Capitol…and the violence targeting Congress are horrors that will forever stay in our nation’s history,” Pelosi ranted.

But like everything else that exits the mouth of the Speaker of the House, her description isn’t only flat wrong but also manufactured for wicked political purposes.

When a thinking person hears the word “armed,” he usually thinks of a firearm, or a gun. Yet here is how the Justice Department describes the trove of deadly weapons seen at the Capitol that day: “During the course of the violent protests, several violent protestors were armed with weapons including bats, pepper spray, sticks, zip ties, as well as bulletproof vests and anti-tear gas masks.” (The zip ties, it’s important to note, weren’t brought into the building by Trumpists but by law enforcement officials.)

I reviewed the charges filed against the more than 200 people arrested for criminal misconduct related to January 6 and found only 14 defendants face any sort of weapons charge. Offenses vary; indictments range from possession of a “deadly” weapon on “restricted” grounds to assaulting a police officer.

But so far, just two people have been charged with unlawful possession of a firearm—and there’s no proof either man “breached” the Capitol let alone threatened lawmakers as part of a coordinated, armed insurrection.

Lonnie Coffman, 70, was indicted by a D.C. grand jury on January 11 with 17 firearms violations. Around 1 p.m. on January 6, Capitol Police, according to charging documents, noticed what appeared to be a gun on the front seat of a pickup truck parked near the Capitol. Cops searched the vehicle and found a handgun, a rifle, loaded magazines, and mason jars filled with material they believed were components to make Molotov cocktails. When Coffman arrived near his vehicle at around 6:30 p.m., he was questioned by police; they discovered two small handguns in his pockets.

Federal authorities threw the book at Coffman, a veteran with no criminal record.

But although he’s been charged with more than a dozen violations of D.C.’s strict gun possession laws, Coffman has not been charged with using his guns, ammunition, or the alleged Molotov cocktails. Further, it’s worth noting that aside from the two pistols found on his person, the other contraband was locked in his truck as the “insurrection” occurred.

The FBI isn’t finished with Coffman yet; agents raided his remote Alabama home on January 26. He’s currently being held in a D.C. jail without bail.

Again, although Alberts was detained near the Capitol, prosecutors do not allege he entered the building or attempted to use his weapon on January 6.

Here is a roundup of the non-firearm “dangerous and deadly” weapons charges:

So, as Joe Biden likes to say, let’s be clear: Not one person has been charged with possessing or using a gun inside the Capitol. Further, no one has been identified as carrying a gun inside the building. Of the hundreds of photographs posted on the FBIs Most Wanted List for the Capitol breach investigation, not a single picture shows anyone with a firearm.

At least 100,000 attended Trump’s speech that day; fewer than 1,000 “stormed” the Capitol. A few hundred have been arrested and only 14 face weapons charges. Those “deadly and dangerous” weapons include two baseball bats, a can of pepper spray, a walking stick/stun gun, an axe, a few fire extinguishers (one in question), a helmet, a riot shield, and a collapsible baton. And at no time did this random weaponry pose a lethal threat to lawmakers inside the Capitol.

Do the idiots who used any sort of weapon to harm an officer or damage property deserve to pay for their stupid and violent actions? Yes.

Was January 6, 2021 an “armed insurrection” or anything close?