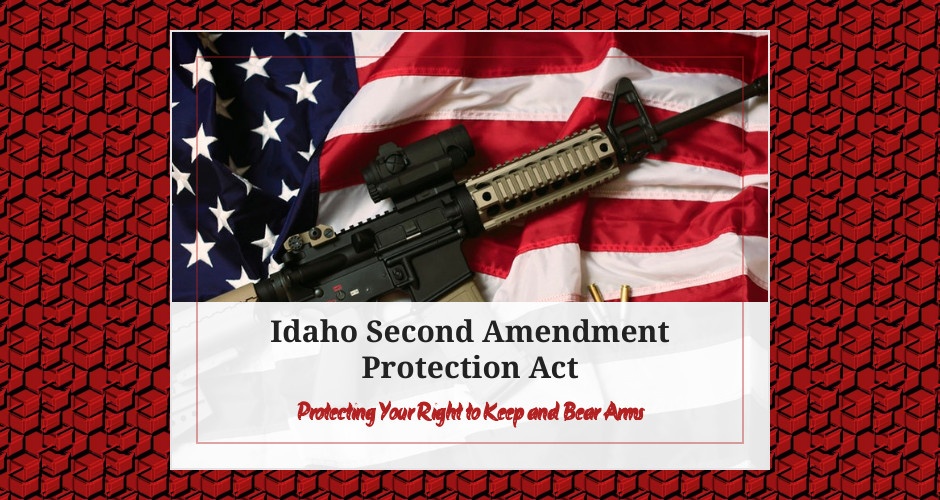 Joe Biden and Nancy Pelosi just announced their push for a TOTAL BAN on AR-15s!

The Idaho Small Arms Protection Act (the Second Amendment State Sanctuary upgrade), according to ISAA legal counsel, is unlike any other legislation in the country, designed to protect the owners of small arms in the United States.

Idaho has a Firearm Freedom Act similar to what other states are proposing this year, however our prior law passed has been proven to be insufficient to protect gun owners as the Ninth Circuit Court ruled that some of the provisions of our law violates the supremacy clause of the United States constitution. These are the links to that code.

It is our goal to defend the right of the citizens of Idaho to possess the arms necessary to protect and defend life, liberty, and the pursuit of happiness.

This is Idaho’s, “2nd Amendment” in our Idaho Constitution

ARTICLE I DECLARATION OF RIGHTS

RIGHT TO KEEP AND BEAR ARMS.

The Idaho Small Arms Protection Act, does not declare that federal laws which have been in place for decades are null, rather we are protecting certain arms, ammunition, reloading supplies and components. While many of these items have been declared illegal in other states, Idaho will protect the right of our citizens to own and use them pursuant to their right protected by the Second Amendment.

The Idaho Small Arms Protection Act, will provide criminal and civil immunity to law enforcement officials and other elected officials who refuse to aid federal agents who choose to enforce federal law passed that is not pursuant to the United States Constitution, Idaho’s Constitution, or Idaho code.

Additionally, if the Attorney General of the state of Idaho will not defend this legislation, this bill provides a way for the legislature to pass a concurrent resolution to intervene on behalf of our state.

This protects our law enforcement and elected officials when they refuse to assist federal agents when they come for your guns.

This does not allow for violation of federal law. This law is a statement that the State of Idaho will defend your right to own these small arms.

Your job is to contact your legislators and ask them to co-sponsor this legislation; I currently have several representatives and no senators that are cosponsors. We invite all to join us in this effort to declare our state sovereignty, uphold our Second Amendment, Fifth Amendment, Ninth Amendment and Tenth Amendment.

A well-regulated Militia, being necessary to the security of a free State, the right of the people to keep and bear Arms shall not be infringed.

No person shall be held to answer for a capital or otherwise infamous crime unless on a presentment or indictment of a grand jury, except in cases arising in the land or naval forces, or in the militia, when in actual service in time of war or public danger; nor shall any person be subject for the same offense to be twice put in jeopardy of life or limb; nor shall be compelled in any criminal case to be a witness against himself, nor be deprived of life, liberty, or property without due process of law; nor shall private property be taken for public use without just compensation.

The enumeration in the Constitution of certain rights shall not be construed to deny or disparage others retained by the people.

The powers not delegated to the United States by the Constitution, nor prohibited by it to the states, are reserved to the states respectively, or to the people.

The question is being asked, if the state is a Second Amendment Sanctuary state, why would a city or county want to declare themselves a 2A sanctuary? I believe that as many statements of intent to protect all of our constitutionally protected natural, God given rights that exist the better.

Our freedom is important, so many in our country now are willing to concede a little bit at a time those values and truths that keep us free, the frog in a pot of warm water is the perfect example.

Law was never intended to punish for thought, or to take the place of providing for ourself, governing our own thoughts and actions. The proper role of government is to be very limited and defined. Review the 9th and 10th amendment again. For good measure review the entire Constitution. Containing less than 8 thousand words, this is not difficult, it is the most important thing to do.

Find the Constitution of The United States, here:

Everyone is essential. Everyone is important. Every right is to be protected.

The power of the government is the people.

Thank you for your prayers and your continued support;

Now is the time we must not let up on securing and protecting our freedom.