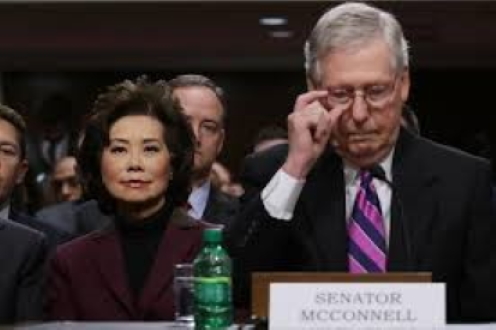 Republicans like to talk about Nancy Pelosi, Dianne Feinstein, Barbara Boxer and Eric Swalwell among other politicians cozy with Chinese Communists – the kind of Democrats who will swear eight ways to Sunday that the gravest threat to the U.S. still comes from Russia.

It’s not just Henry Kissinger, Joe Biden, Jeff Bezos and the New Tech Elite who have gotten rich serving China at the expense of their homeland, America.

I’d like to introduce you to the pair that, with the Trumps out of the White House, represents the first family of the GOP – Mitch McConnell and Elaine Chao.

TRENDING: Archbishop to Biden: Stop calling yourself a ‘devout Catholic’

Mitch McConnell is the Senate minority leader. His wife, Elaine Chao, was secretary of transportation until Jan. 6 – the day of the Capitol melee.

Here’s what she said then: “Yesterday, our country experienced a traumatic and entirely avoidable event as supporters of the president stormed the Capitol building following a rally he addressed. As I’m sure is the case with many of you, it has deeply troubled me in a way that I simply cannot set aside.”

Chao’s husband has been ripping Trump ever since.

McConnell congratulated Joe Biden for being president-elect on Dec. 15, while President Trump was still trying to “Stop the Steal.” McConnell is said to have privately backed Trump’s impeachment and last month publicly stated, “The mob was fed lies. … They were provoked by the president.”

The culmination of McConnell’s betrayal came Saturday when he slammed President Trump, claiming he was “practically and morally responsible” for what happened at the Capitol Jan. 6.

How do we explain this antipathy of both McConnell and Chao toward their president?

McConnell and Chao were married in 1993. Critics of Chao have always worried that her ties to Chinese business interests present a conflict. Her China-born father, James S.C. Chao, had a cozy relationship with then-Communist Party leader Jiang Zemin and owned a shipping company that does business with the Chinese government.

But it’s her relationship with the shady Lippo Group that really caused worries.

A review of financial assets held over a six-year period by Chao and McConnell revealed that Chao had served as director of the Chinese company. Its chief executive, James T. Riady, had agreed to plead guilty to a felony charge of defrauding the U.S. government. Prosecutors said he funneled foreign donations to the campaigns of Bill Clinton. And Lippo’s man in the U.S., John Huang, was convicted of campaign fraud in 1999.

Senate financial-disclosure records showed that, over a four-year period, Chao held a seat on the board of Protective Life Corp., which owned 50% of CRC Protective Life Insurance. Lippo co-owned the rest of the Hong Kong-based unit with China Resources Holdings Co., an intelligence-gathering front company for China’s People’s Liberation Army.

But the way Chao really scored big was by temporarily turning the conservative Heritage Foundation into a pawn for the Chinese. One of her assets had been Heritage donor Maurice “Hank” Greenberg, with AIG, a pro-China lobbyist whose insurance company has done business with China.

For a time, Chao and Greenberg made anti-China scholars as rare as hens’ teeth at Heritage. Greenberg and AIG have donated a fortune to McConnell. The Kentucky Republican happens to be one of Capitol Hill’s biggest China boosters.

While we’re working on cleaning out the dead-wood RINOs like Rep. Liz Cheney, we had better take a long look at Mitch and Elaine too.

Here is what Trump had to say about Mitch Tuesday: “The Republican Party can never again be respected or strong with political ‘leaders’ like Sen. Mitch McConnell at its helm. McConnell’s dedication to business as usual, status quo policies, together with his lack of political insight, wisdom, skill, and personality, has rapidly driven him from Majority Leader to Minority Leader, and it will only get worse. The Democrats and Chuck Schumer play McConnell like a fiddle – they’ve never had it so good – and they want to keep it that way! We know our America First agenda is a winner, not McConnell’s Beltway First agenda or Biden’s America Last.

“In 2020, I received the most votes of any sitting President in history, almost 75,000,000. Every incumbent House Republican won for the first time in decades, and we flipped 15 seats, almost costing Nancy Pelosi her job. Republicans won majorities in at least 59 of the 98 partisan legislative chambers, and the Democrats failed to flip a single legislative chamber from red to blue. And in ‘Mitch’s Senate,’ over the last two election cycles, I single-handedly saved at least 12 Senate seats, more than eight in the 2020 cycle alone – and then came the Georgia disaster, where we should have won both U.S. Senate seats, but McConnell matched the Democrat offer of $2,000 stimulus checks with $600. How does that work? It became the Democrats’ principal advertisement, and a big winner for them it was. McConnell then put himself, one of the most unpopular politicians in the United States, into the advertisements. Many Republicans in Georgia voted Democrat, or just didn’t vote, because of their anguish at their inept governor, Brian Kemp, Secretary of State Brad Raffensperger, and the Republican Party, for not doing its job on Election Integrity during the 2020 Presidential race.

“It was a complete election disaster in Georgia, and certain other swing states. McConnell did nothing, and will never do what needs to be done in order to secure a fair and just electoral system into the future. He doesn’t have what it takes, never did, and never will.

“My only regret is that McConnell ‘begged’ for my strong support and endorsement before the great people of Kentucky in the 2020 election, and I gave it to him. He went from one point down to 20 points up, and won. How quickly he forgets. Without my endorsement, McConnell would have lost, and lost badly. Now, his numbers are lower than ever before, he is destroying the Republican side of the Senate, and in so doing, seriously hurting our Country.

“Likewise, McConnell has no credibility on China because of his family’s substantial Chinese business holdings. He does nothing on this tremendous economic and military threat.

“Mitch is a dour, sullen, and unsmiling political hack, and if Republican Senators are going to stay with him, they will not win again. He will never do what needs to be done, or what is right for our Country. Where necessary and appropriate, I will back primary rivals who espouse Making America Great Again and our policy of America First. We want brilliant, strong, thoughtful, and compassionate leadership.

“Prior to the pandemic, we produced the greatest economy and jobs numbers in the history of our Country, and likewise, our economic recovery after COVID was the best in the world. We cut taxes and regulations, rebuilt our military, took care of our Vets, became energy independent, built the wall and stopped the massive inflow of illegals into our Country, and so much more. And now, illegals are pouring in, pipelines are being stopped, taxes will be going up, and we will no longer be energy independent.

“This is a big moment for our country, and we cannot let it pass by using third rate ‘leaders’ to dictate our future!”

Let’s remember, Donald J. Trump got more votes than any other president – including Biden!

He’s going to get even more if the next presidential election is not rigged.

Mitch McConnell doesn’t have a future in the Republican Party. We’re tired of being the party of good losers.

Joseph Farah is founder, editor and chief executive officer of WND. He is the author or co-author of 13 books that have sold more than 5 million copies, including his latest, “The Gospel in Every Book of the Old Testament.” Before launching WND as the first independent online news outlet in 1997, he served as editor in chief of major market dailies including the legendary Sacramento Union.