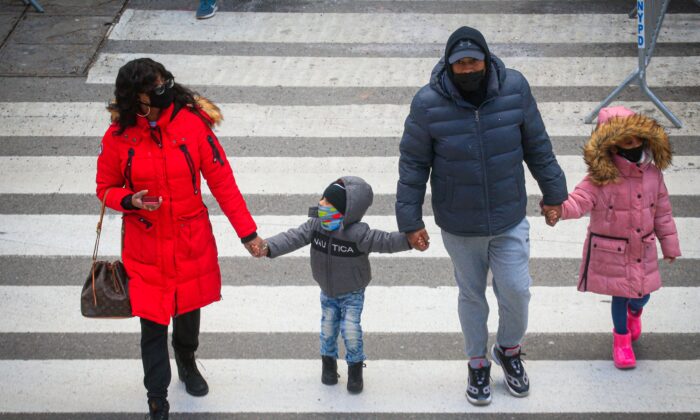 Protective-mask mandates aimed at combating the spread of the CCP virus that causes the disease COVID-19 appear to promote its spread, according to a report from RationalGround.com, a clearinghouse of COVID-19 data trends that’s run by a grassroots group of data analysts, computer scientists, and actuaries.

Researchers examined cases covering a 229-day period running from May 1 through Dec. 15 and compared the days in which state governments had imposed mask mandates and the days when they hadn’t.

In states with a mandate in effect, there were 9,605,256 confirmed COVID-19 cases, which works out to an average of 27 cases per 100,000 people per day. When states didn’t have a statewide order—including states that never had mandates, coupled with the period of time masking states didn’t have the mandate in place—there were 5,781,716 cases, averaging 17 cases per 100,000 people per day.

In other words, protective-mask mandates have a poor track record so far in fighting the coronavirus. States with mandates in place produced an average of 10 more reported infections per 100,000 people per day than states without mandates.

“The reverse correlation between periods of masking and non-masking is remarkable,” RationalGround.com co-founder Justin Hart tweeted on Dec. 20.

The analysts allowed the mandate states a 14-day grace period from the time of implementation in order to begin counting cases against mask efficacy in order to arrive at accurate results.

Supporters of the protective-mask mandates might say that the mandates were often imposed once cases already spread quickly, so there’s a negative bias of increased cases in those areas (or times) that had mandates in place, but there was “no evidence of any reduction in cases or even better outcomes many weeks later,” Horowitz writes.

RationalGround.com researcher Ian Miller discovered that three counties in Florida—Manatee, Martin, and Nassau—that let their mandates expire, had fewer cases per capita than those counties that kept the mandate.

Miller tweeted sarcastically on Dec. 20 that it was “extremely confusing how this could happen, considering” the pro-mandate side’s claim that protective masks “are the single most important public health tool we have” and that masks “provide protection for the wearer, too.”

“The mask religion will have a number of inaccurate excuses ready to go, but of course, they’re obscuring and ignoring that this should not be possible, no matter what the mitigating circumstances, if masks were as effective or important as we were told,” Miller wrote.

Nor, according to Miller, has the protective-mask mandate worked in states such as California, where it was imposed long before the surge in cases began.

“The simple reality is that there is no legitimate data showing the mandates worked,” Horowitz concludes.

There are those who might question the findings, arguing that population density skews the results. The study looked at Florida using county data and found no correlation between mask mandates and fewer cases, even adjusting for population density, Horowitz notes.

While Florida Gov. Ron DeSantis, a Republican, was attacked vigorously by the mainstream media for refusing to impose a statewide protective-mask mandate, counties in the state that avoided mandates performed well in the study.

Of the state’s 67 counties, 22 imposed an executive mandate at some point during the period examined.

“When you isolate only the top 12 most populous counties in the state … eight of them had effective mask orders implemented at some point during the study period, and four never had a countywide order (Brevard, Lee, Polk, and Volusia),” Horowitz writes.

There’s no evidence that protective-mask mandates are correlated with a reduced spread of the coronavirus, he states.

“If anything, the opposite is true,” Horowitz writes.

“And it sure as heck is not because of a lack of compliance.”