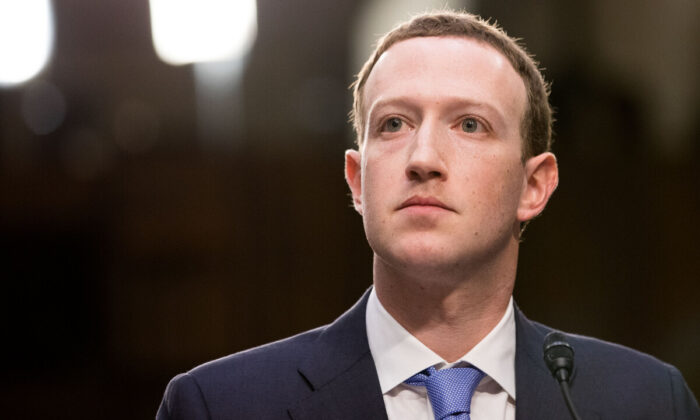 Facebook CEO Mark Zuckerberg made comments last year about COVID-19 vaccines that clash with policies that his platform has implemented, leaked video shows.

Zuckerberg said in July 2020: “I do just want to make sure that I share some caution on this [vaccine] because we just don’t know the long-term side effects of basically modifying people’s DNA and RNA … basically the ability to produce those antibodies and whether that causes other mutations or other risks downstream. So, there’s work on both paths of vaccine development.”

Zuckerberg took a different stance when appearing in a virtual forum in November 2020 with Dr. Anthony Fauci, a leading government scientist.

“Just to clear up one point, my understanding is that these vaccines do not modify your DNA or RNA. So that’s just an important point to clarify,” Zuckerberg said, prompting Fauci to say: “No, first of all, DNA is inherent in your own nuclear cell. Sticking in anything foreign will ultimately get cleared.”

The footage was published by Project Veritas, a journalism watchdog. It was allegedly from Facebook’s internal weekly question-and-answer session.

Zuckerberg’s Facebook has imposed harsh guidelines on what people can post about COVID-19, and banned or restricted a number of users for violating the policies.

Facebook earlier in February said it would take down any posts with claims about vaccines deemed false by health groups or its so-called fact-checkers.

A health care worker prepares a dose of a COVID-19 vaccine at a vaccination center inside the Blackburn Cathedral, United Kingdom, on Jan. 19, 2021. (Molly Darlington/Reuters)

Facebook stated in a blog post, “Today, following consultations with leading health organizations, including the World Health Organization (WHO), we are expanding the list of false claims we will remove to include additional debunked claims about the coronavirus and vaccines.”

Administrators for some groups will be required to greenlight all posts if the groups have been labeled problematic in terms of posts that have been made.

“Claims about COVID-19 or vaccines that do not violate these policies will still be eligible for review by our third-party fact-checkers, and if they are rated false, they will be labeled and demoted,” the company stated.

Footage showing Zuckerberg commenting privately on various issues has been made public before by Project Veritas. In one clip, he praised President Joe Biden’s early executive orders “on areas that we as a company care quite deeply about and have for some time.”

“Areas like immigration, preserving DACA, ending restrictions on travel from Muslim-majority countries, as well as other executive orders on climate and advancing racial justice and equity. I think these were all important and positive steps,” he said.

Facebook banned former President Donald Trump in January while Trump was still in office. Trump remains blocked from the platform.

Jack Phillips contributed to this report.