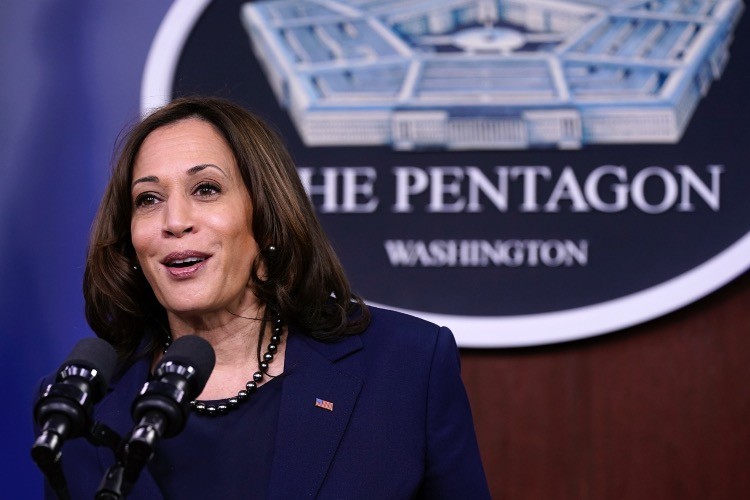 One of the key responsibilities of the President of the United States is spelled out in Article II of the U.S. Constitution, which states that the president “shall receive Ambassadors and other public Ministers.”

Vice President Kamala Harris is filling that role nicely. On Tuesday, the White House published a summary transcript of a phone call Harris made to President Emmanuel Macron of France:

Vice President Kamala Harris spoke today with President Emmanuel Macron of France and expressed her commitment to strengthening bilateral ties between the United States and France and to revitalizing the transatlantic alliance.

Vice President Harris and President Macron agreed on the need for close bilateral and multilateral cooperation to address COVID-19, climate change, and support democracy at home and around the world. They also discussed numerous regional challenges.

Andrea Widburg at American Thinker described Harris’ ever-present image as hovering over Joe Biden like the Grim Reaper, waiting for her opportunity to assume all the reins of power. Widburg noted that Harris is “clearly being prepped to take over as president in Biden’s place as soon as possible,” adding:

In his place, we’ll get a woman who began her career by sleeping her way to the middle; who abused her office as California attorney general; and who had so little charm that she didn’t even make it to the first primary election.

Add to that the fact that she’s famously leftist and Americans should be nervous and humiliated that she may one day be the official face of the United States.

“Famously leftist,” indeed. Harris rates 37 pages at the aggregator DiscoverTheNetworks.org, listing of hundreds of sources detailing her and her family’s links to Marxist, Leninist, and communist groups.

Last May, Biden called himself a “transition candidate,” being a temporary officeholder before giving way to progressives such as Mayor Pete Buttigieg. Said Biden at the time:

[My running] has to do with [giving] a bench to younger people in the party … an incredible group of talented, newer, younger people.

The transition, according to Steven Mosher, could take place in two stages: First, Biden’s wife, “Dr. Jill,” would perform the duties of Woodrow Wilson’s wife, Edith, during Wilson’s last days in office. After her husband suffered a debilitating stroke, Edith took over the management of the Oval Office, determining who was allowed to see the president and what documents he was shown. She earned the role as the “first female President of the United States.”

As Slow Joe slows down even further, Dr. Jill will probably quietly take over more of his Oval Office duties, while Kamala gradually becomes the public face of the administration, taking upon herself the onerous foreign trips, such as the upcoming trip to the U.K.

I have never thought that Joe would serve out his full first term, let alone a second. Now, after watching his performance over the past few weeks, I’m thinking he won’t even make it to the midterms.

As Biden takes longer and longer afternoon naps following a hard morning in the Oval Office, Harris eagerly waits for the transition. If Dr. Jill stumbles or delays the inevitable, Harris can employ the 25th Amendment: “In case of the removal of the President from office, or his death or resignation, the Vice President shall become President.”