Recent activities and highlights taking place in the Idaho Capitol.

Recent activities and highlights taking place in the Idaho Capitol. 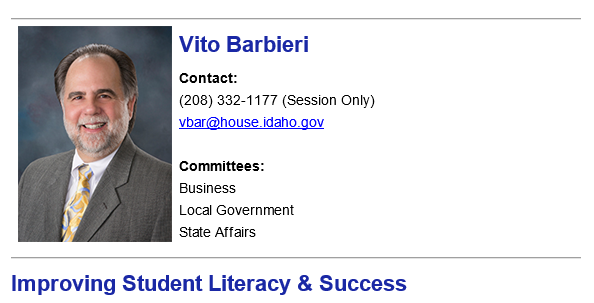 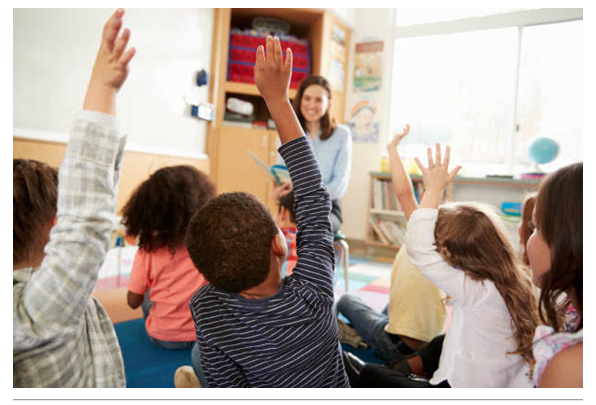 Research shows that students who still struggle with reading in Third Grade are four times more likely to drop out of high school than students who can read proficiently. Many students lag behind and begin to struggle in other subjects without a solid foundation in reading, because more than 85 percent of the curriculum is taught through reading. The Reading Foundation shares that one of the most important predictors of graduating from high school is reading proficiently by the end of Third Grade. S1006 is working to consolidate the current statutory requirements for literacy intervention into a single chapter and focus on the importance of having every student reading at grade level by the end of Third Grade. Currently, Idaho is ranked 25th in the nation for literacy with a literacy rate of 89.5%. This legislation is intended to achieve a base for literacy inside Idaho schools and promote success in the next generation.

The House Education Committee held hearings for H0069 on the 9th and 10th of this month. The bill eliminates several non-value added activities associated with K-12, including reports and unnecessary bureaucracy. It also drives effectiveness in the aspects of schools that Idaho’s students are primarily interested in: more students learning to read, achieving proficiency in math, earning more industry certificates in CTE programs, etc. This legislation also outlines a plan to help schools create self-driven learners who best utilize the resources made available.

Career Technical Education and a Pathway to Workplace Readiness 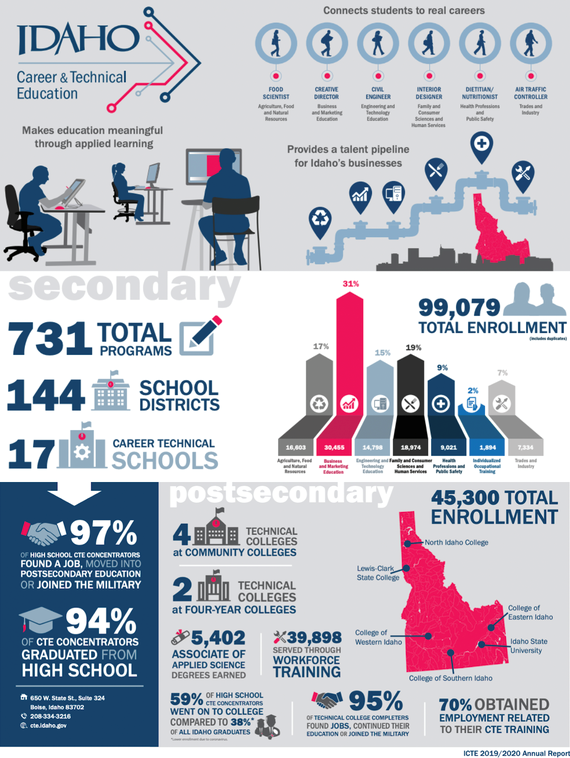 The Senate is also advancing Senate Bill 1039. S1039 would allow school districts to award a Workplace Readiness Diploma (WRD) to graduates who have completed Career Technical Education (CTE) programs. The WRD is a credential that certifies that the student has the essential skills needed for workplace success. Career Technical Education programs have proven to be incredibly successful, with more than 95% of CTE students graduating from high school. The skills-based learning also helps launch students into rewarding careers. The bill passed the Senate with a vote of 33-0-2 and was introduced to the House. It was referred to the House Education Committee.

The Senate Education Committee held a hearing for SB1045 last Tuesday. The purpose of the bill is to promote educational opportunities through the creation of a separate Advanced Opportunities program for Idaho students who attend private schools. This would allow them to receive funds for use in completing Advanced Placement classes, college credit exams, Career Technical Education, and dual-credit courses. Each student would have access to a maximum of $750 for such programs to help them “jump-start” their future under the current proposal. This number was reached after considering the average amount of funds used over a four-year period with the current Advanced Opportunities program, but the amount would be subject to change annually by the Legislature if passed.

Senators heard testimony from students, parents, and school administrators from across the state. The bill passed out of the committee with a 6-3 vote and was sent to the floor with a Do Pass recommendation.

H0026: This legislation would eliminate the use of the habitual status offender definition and prevent status offenders from being detained in secure facilities instead of juvenile shelter care facilities. The bill passed the House with a vote of 70-0-0, was introduced to the Senate, and referred to the Senate Judiciary and Rules Committee. It received a Do Pass recommendation from the Senate Judiciary and Rules Committee and is scheduled for its Third Reading.

H0038: This bill would amend Section 54-5707 of Idaho code to allow certain prescription drugs to be prescribed through telehealth services in compliance with federal law. The bill passed the House with a vote of 70-0-0, was introduced to the Senate, and referred to the Senate Health and Welfare Committee.

H0066: Full disclosure of anticipated tax increases on bond and levy ballots would be required under this bill. Information that is not relevant to the bond or levy in question (such as any past/proposed/current bonds, levies, or other matters) would not be allowed on the ballot. The bill passed the House with a vote of 46-24-0, was introduced to the Senate, and referred to the Senate State Affairs Committee.

H0088: This legislation would limit ballot handling to those authorized to do so under Idaho law, which would prohibit the practice of “ballot harvesting.” The bill passed the House State Affairs Committee and is on the Third Reading.

HCR002: This concurrent resolution would lift the restrictions on group sizes of ten or more imposed by the Governor’s emergency declaration. The resolution was adopted by the House with a vote of 55-15-0 and was referred to the Senate State Affairs Committee.

HJR001: This joint resolution would amend the Idaho Constitution to allow the Legislature to convene itself into an extraordinary session within 15 days of a written request of 60% each of the House and Senate membership. The bill passed the House with a vote of 51-18-1, was introduced in the Senate, and  referred to the Senate State Affairs Committee.

S1006: This legislation would consolidate current statutory requirements for literacy intervention and update provisions in alignment with the Task Force recommendation for focusing on the importance of having every student reading at grade level by the end of grade 3. The bill passed the Senate with a vote of 35-0-0 and was referred to the House Education Committee.

S1009: This bill would include the State Fire Marshall and State Fire Marshal deputies in the same definition as firefighters under the Public Employee Retirement System. The bill passed the Senate with a vote of 32-1-2 and was introduced in the House, and referred to the House Commerce and Human Resources Committee.

S1027: This legislation would compensate individuals who were wrongfully convicted and imprisoned with $62,000 per year of incarceration or $75,000 per year if incarcerated on death row. Those who were wrongfully put on the sex offender registry would receive an additional $25,000 per year. Exonerees would be given a two-year window to file a claim from the moment they were formally exonerated by a court. The bill passed the Senate with a vote of 35-0-0 and was introduced in the House. It was referred to the House Judiciary, Rules, and Administration Committee.

S1039: This bill would allow school districts to award a Workplace Readiness Diploma to graduates who have completed career technical education programs. The bill passed the Senate with a vote of 33-0-2 and was introduced in the House. It was referred to the House Education Committee.

SJR101: This joint resolution would amend the Idaho Constitution to prohibit the production, manufacture, transportation, sale, delivery, dispensing, distribution, possession, or use of psychoactive drugs. Exceptions are allowed for prescription drugs approved by the U.S. Food and Drug Administration and drugs used in clinical trials. The bill passed the Senate with a vote of 24-11-0, referred to the House, and sent to the House State Affairs Committee.