The Precedent for After Office Impeachment 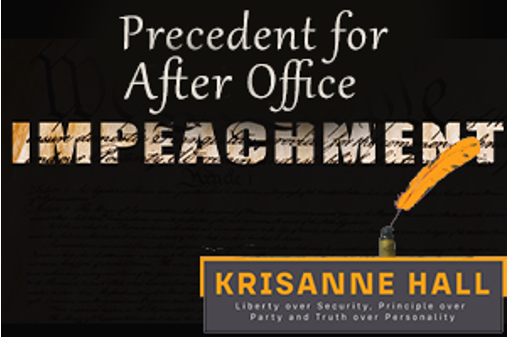 The Precedent for After Office Impeachment

“For my part, whatever anguish of spirit it may cost, I am willing to know the whole truth; to know the worst, and to provide for it.”

The facts I am going to provide may cause aguish to some.  However, if you will follow me all the way to the end, I will show you that the knowledge of this precedent as preparation and instruction, could cause as much good as distress.

Impeachment is a provision within the Constitution the drafters, and those who ratified the Constitution, gave us as means to not only dismiss those from office who have violated their solemn trust, but to also ensure those impeached could never hold office again and therefore hold the opportunity to violate that trust again.  Impeachment is found in several sections of the Constitution; Article 1, Section 2, Clause 5; Article 1, Section 3, Clauses 6 and 7; Article 2, Section 4; Article 3, Section 1- each section adding to the other the proper meaning, purpose and application of the power of impeachment.

Impeachment is a Criminal NOT Political Process

Impeachment begins when members of the House of Representatives draw up an Article(s) of Impeachment in which these members alleged that the “The President, Vice President and [any] civil Officer of the United States” has committed a crime.  Article 2 section 4 outlines the very specific terms for a Constitutionally authorized impeachment.  Every Article of Impeachment must find its origin in the conditions of the Constitution as outlined in Article 2 section 4.

“The President, Vice President and all civil Officers of the United States, shall be removed from Office on Impeachment for, and Conviction of, Treason, Bribery, or other high Crimes and Misdemeanors.”

The standard for impeachment is criminal NOT political.  The only relevant question is Did a person in the trust of a federal office violate that trust by committing an actual crime?  Alexander Hamilton, in Federalist 65, gives us a bold warning of what will go wrong when impeachment is used for political punishments instead of strictly holding to the criminal terms of impeachment outlined in Article 2 section 4.

“In many cases it will connect itself with the pre-existing factions, and will enlist all their animosities, partialities, influence, and interest on one side or on the other; and in such cases there will always be the greatest danger that the decision will be regulated more by the comparative strength of parties, than by the real demonstrations of innocence or guilt.”

When the House votes and ratifies an Article(s) of Impeachment, that Article(s) becomes a criminal charging document.  When that criminal charging document is delivered to the Senate, the next stage of impeachment begins: The Trial by the Senate.  To reinforce the judicial nature of this process, the chief justice of the Supreme Court presides over this Senate Trial.

Senators are expected to review the Article(s) of Impeachment, conduct an evidentiary trial, and then judge the Impeachment based upon due process and criminal legal standards.  For the Senate to conduct a trial based upon political bias rather than evidence and due process makes a mockery of the process Impeachment and transmute America into a Banana Republic.

Precedent For After Office Impeachment

The “ALL CIVIL OFFICERS” phrase in Article 2 section 4 is a catch all that includes everyone who currently works for the federal government as an elected or appointed officer or has worked for the federal government in that past.  Some may argue that once a person leaves federal employment, the option for impeachment is no longer viable.  However, the precedent of impeachment tells us otherwise and a view of history can help us understand why.

William Belknap served as Secretary of War under Ulysses S Grant from October 25, 1869 – March 2, 1876.  While Secretary of War, Belknap’s extravagant life style came into question.  You see, Belknap only made $8k a year but was known for his extravagant lifestyle and expensive parties.  Congress launched an investigation into his finances and found corruption that extended back to 1870.

According to Senate records, in 1870, “Belknap’s luxury-loving first wife assisted a wheeler-dealer named Caleb Marsh by getting her husband to select one of Marsh’s associates to operate the lucrative military trading post at Fort Sill in Indian territory.  Marsh’s promise of generous kick-backs prompted Secretary Belknap to make the appointment.  Over the next five years, the associate funneled thousands of dollars to Marsh, who provided Belknap regular quarterly payments totaling over $20,000.”

Some of the accusations against Belknap included, indirectly selling weapons to France and for accepting illicit kickbacks in exchange for making political appointments.  Gun running, kickbacks, political deals for financial gain…isn’t that exactly what evidence strongly suggests Hillary Clinton is or was involved in?

According to Senate records, “On March 2, 1876, just minutes before the House of Representatives was scheduled to vote on articles of impeachment, Belknap raced to the White House, handed Grant his resignation, and burst into tears.”

Belknap’s resignation did not stop his impeachment.  “Later that day, members voted unanimously to send the Senate five articles of impeachment.”  What was Congress’ chief accusation against Belknap: “criminally disregarding his duty as Secretary of War and basely prostituting his high office to his lust for private gain.”

Precedent is often established in error.  Whether precedent is legally or historically correct doesn’t stop the modern system from asserting it as authority and knowing that precedent is essential in creating an argument for or against it.  The precedent of Belknap has yet to have been tested, so in the legal world that makes it controlling.  But if modern politicians try to use the Belknap precedent to attack someone for political vengeance, they may end up getting more than they bargained for.  For example, Hillary Clinton was accused of a very serious federal crime.  Although the Department of Justice decided not to criminally prosecute her for that crime, under the Belknap precedent there would be nothing to stop Hillary from coming under the prosecution of impeachment, in today’s Congress, or any Congress in the future, causing her to lose her pension and to be blocked from running for federal office every again.  Do not forget, the Department of Justice disclosed very damning criminal evidence against Eric Holder in the “Fast and Furious” scandal.  Under this precedent Eric Holder could also be impeached.

The character of Belknap can be seen in numerous modern politicians.  If members of this Congress choose to test the Belknap precedent, how many of them could find themselves on the impeachment chopping block in the future?  With this knowledge in hand, while civil officers in Congress are throwing around the threat of impeachments, there is no excuse as to why James Comey, Eric Holder, Lois Learner, Hillary Clinton, Barack Obama, and yes several Supreme Court justices ought not be impeached even today.

So there is a precedent to allow impeachment after office for the president, vice president, and every civil officer.  The question remains, do those with the power to impeach really want to open that Pandora’s Box only to find themselves consumed when the change in political winds come, because all of history dictates they will come.