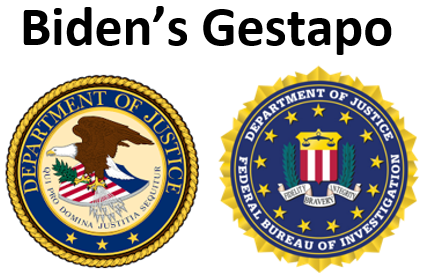 Following the events at the Capitol on January 6, 2021, the Biden Justice Department (DOJ) and its Federal Bureau of Investigation (FBI), as if the old Trumpian one were not bad enough with its do nothing attorneys general Sessions and Barr, has been elevated to a level of intimidation and infamy never previously seen or experienced in our once great republic. Terrorizing virtually anyone who appeared at the rally for President Donald J. Trump on that date, or who later marched down Pennsylvania Avenue and entered the Capitol building, the DOJ and its lackey FBI, run by a two-faced political hack by the name of Christopher Wray (another ”great” Republican establishment appointee turned Benedict Arnold), has set out to threaten, arrest, and prosecute supporters of The Donald and other conservatives, as part of a nationwide inquisition to make sure that any dissent to the socialist/communist/atheist takeover of the United States is complete and will remain permanent.

Willingly joining in this purge is virtually every quarter of American society, including sports leagues. Much like occurred in the years leading up to and during World War II with the rise of Adolf Hitler, these institutions and entities, even if not true believers, have treacherously thrown in their lot with the “winner,” just as did the likes of Mercedes Benz, BMW, and Deutsche Bank, the latter of which even saw fit to finance the Fuehrer’s concentration camps. In effect, these entities are paying homage to the radical left as a type of “blood money,” hopefully wishing to be left alone by the dangerous leftist barbarians who, having entered into our gates through a fraudulent presidential election, now have a terminal stranglehold on our body politic and thus our lives.

At the same time that this rein of terror is furthered if not perpetrated by our so called chief law enforcement agency the DOJ and its FBI – which has been turned into as a lesser version of the Heinrich Himmler’s Gestapo – my once proud employer has not taken action against major crime figures such as James Comey, Andrew McCabe, the “love birds” Peter Strzok and Lisa Page, and Obama’s felonious intelligence czars James Clapper and John Brennan, all of whom criminally triggered the now infamous Russian collusion witch hunts. And, let’s not forget that the Bonnie and Clyde of American politics, Bill and Hillary Clinton, with their money laundering racketeering enterprise known as the Clinton Foundation, Barack Obama with his phony birth certificate that paved the way for his two fraudulent presidential elections as he is not “a natural born citizen,” and Joe, Hunter and Frank Biden with their bribery caper emanating from Communist China, Ukraine and Russia, all remain untouchables and at loose to wreak more havoc on our republic.

To put what I am saying in stark contrast, is a report last Friday in the sports publication “Swim Swam,” titled “Grand Jury Indicts Olympian Klete Keller on 7 Charges Related to Capitol Riots.”

“As we first reported on January 11, 2021, it has been reported that Olympic Keller was among those involved in the January 6th insurrection at the United States Capitol.”

“Two days later, it was announced that Klete Keller had been charged in U.S. District Court…”

What were these “serious charges?” Civil disorder, obstruction of an official proceeding, and aiding and abetting, entering and remaining in a restricted building or grounds, disorderly and disruptive conduct in a restricted building or grounds, impeding passage through the Capitol grounds or buildings, parading, demonstrating or picketing in a Capitol building. If convicted on all criminal counts, Keller could be sentenced to 30 years in prison, it was reported.

As in Woody Allen’s “Take the Money and Run,” Keller might as well have been charged, as was the main character in Allen’s comedy, with having sex with a horse.

But what is even worse if not more despicable and absurd is the “leftist derriere kissing,” again as reported by “Swim Swam,” of the head of the United States and Paralympic Committee:

“First off, I strongly condemn the actions of the rioters at the U.S. Capitol. They do not represent the values of the United States of America or Team USA.

“At home and around the world, Team USA athletes are held to a very high standard as they represent our country on the field of play and off. What happened in Washington, D.C., was a case where that standard was clearly not met. The people involved attacked the very fabric of the democracy we all proudly represent and, in turn, also let our community down. I urge everyone associated with Team USA to continue to celebrate our diversity of background and beliefs, stand together against hatred and divisiveness, and use our influence to create positive change in our community.”

There you have it; the nation has been perverted by the left into a lesser version of National Socialism under the Third Reich, with even sports leagues bowing down to its “fearless leaders.” And, couple this with the DOJ and its FBI being used as a principal sword to keep We the People from exercising our God-given constitutional rights of free speech and protest. And, lest anyone forget, the Capitol building belongs to all of us. That Klete Keller had the guts to enter the building in protest was no more a serious crime than Martin Luther King rightfully using civil disobedience by subjecting himself and his disciples to arrest and prosecution, to fight for equal rights for all Americans.

I have more to say about all of this in my new book “It Takes a Revolution: Forget the Scandal Industry!, which can be obtained at Amazon.com and all major booksellers on line.” Also listen to my daily podcast and weekly radio show embedded below.