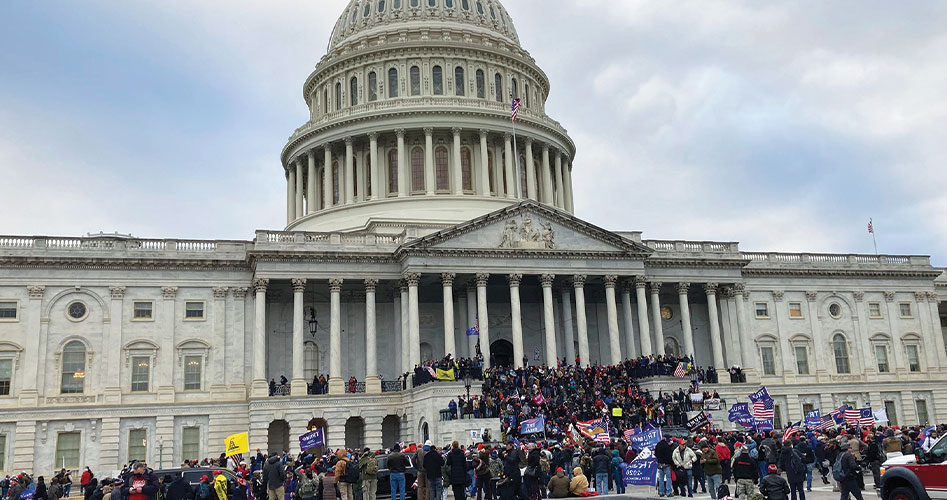 When someone set the German parliament on fire, the Nazis used it as an excuse to consolidate power and punish opponents. Now Democrats are trying a similar tactic.

The sound of breaking glass penetrates the night as smoke billows from the German parliament building, called the Reichstag, which is frightfully aflame. It’s the work of one man, say many; or maybe one conspiracy, say others. But the cost is severe, with the structure suffering $1 million in damages in 1933 dollars, though this pales in comparison to the damages to come. For the fire will be used to catalyze a series of events that will visit a far greater conflagration upon the world.

“You never want a serious crisis to go to waste,” said then-Obama administration Chief of Staff Rahm Emanuel in 2009. German leader Adolf Hitler probably wouldn’t have liked Emanuel very much (the latter is Jewish), but he certainly would’ve agreed with his sentiment. For as is well known, Hitler and his Nazis seized upon their convenient crisis, the Reichstag fire on February 27, 1933, to strip fundamental rights and assume greater power in Germany. This is much like what’s occurring today, too, with Democrats and their Big Tech allies using the January 6 riot at the U.S. Capitol building as a pretext to attempt the same.

Of course in popular speech, a “Reichstag fire” is a spark. And  there are potential “Reichstag fires” continually, whether 9/11, the 2008 financial crisis, or our occasional mass shootings. And while they’re often used to advance agendas — e.g., the 1996 Port Arthur, Tasmania, shooting rampage led to Australia’s gun crackdown — tyranny doesn’t follow unless the time is right.

The time was right for Hitler in 1933. His National Socialist Workers (Nazi) Party had increased its power in the late 1920s owing to growing dissatisfaction with the weak Weimar Republic; early 1930s economic woes then further destabilized the nation, causing political uncertainty. Thus did President Paul von Hindenburg, hoping for an alliance with the Nazis against opponents he fancied more left-wing, reluctantly ask Hitler to serve under him as chancellor. In other words, much as with Joe Biden today, Hitler appeared less left-wing than the alternatives.

Amid this turmoil, however, “the Nazis seized even more power, infiltrating the police and empowering ordinary party members as law enforcement officers,” Smithsonian Magazine wrote in 2017. “On February 22, Hitler used his powers as chancellor to enroll 50,000 Nazi SA men … as auxiliary police.”

Interestingly, we see a rough parallel today. While the Democrats don’t yet control local law enforcement, the “defund” and “re-imagine the police” movements seem to be efforts in that regard. After all, the logical reason for leftists’ desire to eliminate the police is that they want to become the police.

Note here that while controlling the media, academia, entertainment, Big Tech, and most of big business (as the Left does) is invaluable for applying economic and social pressure to enforce agenda compliance, completely imposing your will is impossible without having “boots on the ground.” (The sheriffs who’ve refused to enforce COVID virus regulations and gun-control laws prove this.) So no matter the time or place, wielding police power is imperative.

Returning to Hitler, it was after the Reichstag fire that his arrogation of power entered high gear. The very next day, insisting the incident foreshadowed a communist onslaught against Germany, “Hitler persuaded President Hindenburg to sign an emergency decree ‘for the Protection of the People and the State,’ suspending constitutional liberties and allowing the state to exercise extraordinary powers in the name of ‘public safety,’” wrote William F. Jasper in the September 16, 1996 issue of The New American.

Things continued moving fast. “Although the Communist party had won 17 percent of the Reichstag elections in November 1932, and the German people elected 81 Communist deputies in the March 5 elections, many were detained indefinitely after the fire,” Smithsonian adds. “Their empty seats left the Nazis largely free to do as they wished.”

Could this not remind us of how Representative Bill Pascrell (D-N.J.) and other leftists, as the Washington Examiner reported December 11, “demanded that House leadership refuse to seat the 126 Republicans supporting Texas’s Supreme Court lawsuit challenging the 2020 election results”? Do note that Democrats often challenge electors, starting in 1969, with the habit intensifying in the 2000s.

What the Nazis did with their free rein was follow up the Fire Decree with The Enabling Act of March 23, 1933, which was “ostensibly also put in place to safeguard the people,” wrote TNA’s Kurt Hyde last June. He continued:

This bill gave the chancellor’s cabinet supposedly temporary legislative power — essentially making it an oligarchy with the powers of the Reichstag.… With plenty of political maneuvering, plus a little intimidation from Nazi Brownshirts who were present at the vote, the Enabling Act passed with the necessary two-thirds vote, with the only opposition being from the SDP (Social Democrats). The Communist Party (KPD) was not allowed in the Reichstag [as mentioned earlier], and they didn’t vote.

The shenanigans did not end there. The Enabling Act was supposed to be temporary, scheduled to expire on April 1, 1937, but was extended in 1937 and extended again in 1941.

Clearly, the Nazis never intended for the act to expire. What did expire, of course, was freedom. And for a portent of things to come, consider the details of the first tyrannical move after the Reichstag inferno, the aforementioned Fire Decree. It “abolished freedom of speech, assembly, privacy and the press; legalized phone tapping and interception of correspondence; and suspended the autonomy of federated states, like Bavaria,” Smithsonian writes. Relating this to our time, the irony is that many of the above freedoms were already compromised in the United States well before January 6 — after previous “Reichstag fires.”

First, our states’ autonomy has been gradually reduced for 100-plus years. As for “legalized phone tapping and interception of correspondence,” our government has used the Patriot Act to spy on Americans. In particular, the Obama administration and Deep State intelligence agencies used deceit-derived FISA warrants to spy on President Trump’s campaign/administration. Of course, such measures also involve invasions of privacy.

Next, freedom of assembly was curtailed using a COVID “Reichstag fire” pretext. Leftist state governments forbade Americans from gathering — most egregiously at church and to engage in anti-lockdown protests — but then let their Black Lives Matter allies demonstrate, and riot and loot. Then there was the impairment of freedom of speech and the press, which brings us to our true “Day After Reichstag.” As TNA’s Luis Miguel wrote online last month, within hours on January 8,

Twitter permanently suspended the account of the president of the United States, Donald J. Trump, along with the accounts of Michael Flynn and Sidney Powell, allies of the president who have worked to expose … the voter fraud that allowed Joe Biden to win the 2020 election.

Other social platforms, such as Twitch, also banned President Trump, while others began heavily censoring him, as in the case of the Chinese-owned TikTok….

The indignation among Americans at the blatant partisanship that would drive these companies to censor the leader of the free world prompted many to flock to Parler, a free-speech social media app founded by conservatives….

But The Powers That Be in the world of Tech were already set to pounce on hopes of a viable alternative channel of communication.

Were they ever? First Google and Apple banned Parler from their app stores on January 8 and 9. Then Amazon shut down the company’s servers at midnight on the 10th, which would took the site offline. Parler CEO John Matze called this takedown “a coordinated attack by the tech giants to kill competition in the market place.”

On the 10th, however, he got yet more nasty surprises: “Every vendor from text message services to email providers to our lawyers all ditched us too on the same day,” Matze told Fox News at the time. So consider what Big Gov/Big Tech has effected: Much as with China’s “social-credit system” — which allows one to participate in society insofar as he conforms to state ideology — Parler was denied everything a commercial entity would need to conduct business. Had the takedown been directly controlled by a totalitarian regime, it could not have been too much more complete.

There are other victims as well. Musician Ariel Pink’s record label dropped him merely because he attended the January 6 rally (he was asleep at his hotel during the riot); and popular commentator Dan Bongino’s Twitter account was suspended. Moreover, Twitter CEO Jack Dorsey was recently caught on hidden video saying there’d be more suppression to come.

Some may now say, “Don’t like the censorship? Go build your own social-media company.” Yet when the world’s Matzes accept this challenge, they’re then shut down by GoogTwitFace, anyway. And while it’s reasonable telling “conservatives to make their own social-media apps to preserve free speech,” as Luis Miguel put it, “if they can’t even get these apps on devices due to the politically motivated decisions of the Tech Overlords, it’s not realistic to expect conservative Americans to be able to create their own alternative telecom infrastructure, which would be a billion-dollar enterprise.” Thus, it’s a bit like denying a politically “unfashionable” 1960s business owner phone and postal service and then saying, “Don’t like it? Create your own phone company, erect your own telephone poles and wires, and hire your own mail carriers nationwide.”

Moreover, if GoogTwitFace “erased” the president of the United States and an up-and-coming, highly successful social-media company, who is safe? As Matze told Fox News, Big Tech “could destroy anybody” — and will seek to destroy all anti-establishment dissent in what is an end run around the First Amendment.

First GoogTwitFace benefited from already existing “Section 230” protection from lawsuits, which helped it develop near monopolistic status. Growing powerful enough to be able to shift up to 15 million votes in an election, according to research, Big Tech then used information control to elect Democrats, notably in 2020.

So the Democrats gain power and GoogTwitFace political allies who won’t ever rein it in. The tech oligarchs then use their free hand to silence the Democrats’ political opponents who, do know, are also often Big Tech’s competition — thus, GoogTwitFace can make even more money. The kicker: They can then funnel some of this cash back to the Democrats in the form of campaign donations. It’s one dark hand washing the other and both hands together choking out freedom, as the government effects censorship by proxy.

Of course, censorship, by anything, makes knowing truth difficult. How many Americans know, for example, that a few left-wing agents provocateur have been arrested for complicity in the January 6 violence? This reality — that the riot might not have been solely Trump supporters — also mirrors the original Reichstag fire: While most historians believe the culprit was the man blamed, Dutch communist Marinus van der Lubbe, others suspect it was the Nazis’ handiwork.

Whoever’s to blame for the Capitol violence, the truth is that just as in 1933, it’s being used for evil ends. As I write this, 26,000 National Guard troops are in Washington, D.C., allegedly over fears of Inauguration Day threats. Even more strikingly, the FBI is now vetting the troops over, ostensibly, concerns that some may be plotting against the incoming administration. Is this legitimate fear or paranoia — or is it a strategy (or some combination thereof)? To wit: It can strengthen the claim that the “right-wing threat” to the Republic is so severe that more repression is necessary. Related to this, TNA reported January 12 on a new Pentagon plan to purge the military of conservatives under the pretense of fighting “hate groups.”

The lesson here is that whether named Hitler, Stalin, Mao, Pol Pot, Julius Caesar, or something else, power-hungry demagogues are ever among us — and their tactics don’t change. Sadly, neither does the reality that millions of people, driven by ignorance and often prejudice, will passionately follow them into the abyss.