Will Florida Become The Taiwan Of The United States? 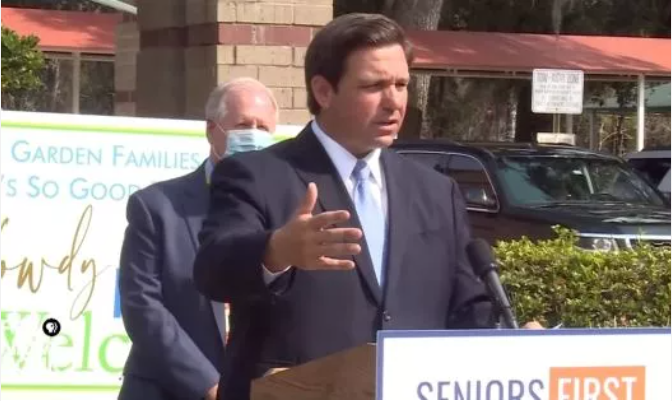 Will Florida Become The Taiwan Of The United States?

Conservatives who came into the movement as anti-communists will well remember that at the conclusion of the Chinese Communist Revolution the government of free China fled to the island province of Taiwan, there to maintain the legitimate government of China and a beacon of freedom and economic liberty in Asia.

The Chinese Communists consider Taiwan to be a “breakaway” province and have imposed various sanctions and decades of military threats and harassment to bring the freedom-loving Chinese on the island into the oppressive Communist Peoples Republic of China.

We remind CHQ readers of that grim history because it appears that much the same thing is about to happen here in the United States, as the oppressive Marxists of the Biden administration have begun to threaten the State of Florida with sanctions for its liberty-minded approach to dealing with the COVID epidemic.

Michael Wilner, Ben Conarck, and Nicholas Nehamas writing for McClatchy newspapers reported the Biden administration is considering whether to impose domestic travel restrictions, including on Florida.

“No decisions have been made, but we certainly are having conversations across government,” the unnamed White House official told the reporters, pointing to current guidance from the Centers for Disease Control and Prevention encouraging Americans to stay home and only travel for essential reasons.

“This is a war and we’re at battle with the virus. War is messy and unpredictable, and all options are on the table,” the anonymous official said.

A war is an apt analogy, but it is not a “war” on the COVID virus the Biden administration is about to declare.

Florida Governor Ron DeSantis was a top ally of former President Donald Trump, who now lives in Florida, and Trump’s popularity in the Sunshine State fueled a 2020 Republican election wave in the state. Any types of travel restrictions could derail Florida’s economy, which relies heavily on tourists, observed Politico. The initial wave of lockdowns last spring sent the state’s tax collections into a spiral. Florida is likely to have a budget deficit given last year’s drop in tourism-related revenues.

Gov. DeSantis called consideration of travel restrictions “absurd” and a “political attack on the people of Florida.” He said it would be “ridiculous” to impose curbs on domestic travel while relaxing restrictions on the U.S.-Mexico border.

“Any attempt to restrict or lock down Florida by the federal government would be an attack on our state, done purely for political purposes,” DeSantis said at a press conference in Port Charlotte, Fla. He also questioned the need for any type of restrictions given Florida’s middle-of-the pack ranking in terms of Covid-19 fatalities.

Not only would they be unconstitutional, unwise and unjust, domestic American travel restrictions on Florida would be an unprecedented attack on a state by the federal government.

Much as Taiwan did as the Chinese Communists rolled across mainland China, Florida is already experiencing an influx of COVID refugees as people from locked-down Democrat-run northern states flee the oppressive and economically devastating policies of Democrat Governors like New York’s Andrew Cuomo and Michigan’s Gretchen Whitmer. A federal travel ban on Florida would secure the Sunshine State’s place as a beacon of freedom and economic liberty off the coast of Democrat Joe Biden’s Marxist America.

We urge CHQ readers and friends to contact Florida’s Governor Ron DeSantis through this link, tell Governor DeSantis you support his fight to keep Florida open and you are behind him 100% in his battle with the Biden administration.

Published with Permission of conservativehq.org