Biden’s Genius Plan: Release Thousands of Illegals Without Testing Them for COVID 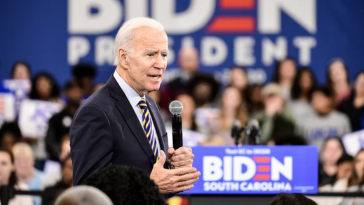 Biden’s Genius Plan: Release Thousands of Illegals Without Testing Them for COVID

President Joe Biden cracked down on international flights out of concern for new COVID variants that are developing overseas (and already well-entrenched in the U.S.), but it doesn’t appear that he’s willing to sacrifice his pro-illegal immigration agenda for the sake of public health. In an explosive story on Tuesday night, Fox News host Tucker Carlson revealed that illegal immigrants are being released by the thousands from ICE detention facilities…but they are not getting COVID tests before being pushed out into the general American public.

Carlson accused the Biden administration of “releasing thousands of foreign nationals” into U.S. communities without the slightest attempt to see if they may be bringing the coronavirus with them. Migrants from countries with high infection rates, he said, “are being sent forth into the population as though COVID isn’t real.”

Confronted with this story on Friday, White House press secretary Jen Psaki would only say she “didn’t care enough to answer the question,” which tells you everything you need to know about this administration’s priorities.

Biden may not be deterred by reporters or Fox News from pursuing his open-borders agenda, but he is – so far – getting a fair bit of pushback from the courts.

From the Epoch Times:

A federal judge in Texas extended the suspension of President Joe Biden’s 100-day moratorium on deportations until Feb. 23.

U.S. District Court Judge Drew Tipton in the Southern District of Texas on Tuesday ruled that the federal government cannot make immigration enforcement changes without consulting Texas. As a result, he extended the temporary restraining order by another 14 days, asserting that the state of Texas would face more harm than the federal government if the extension wasn’t granted.

”The irreparable harm that would accrue to Texas if an extension of the [temporary restraining order] is not granted before consideration of its motion for a preliminary injunction is more substantial than any harm incurred by the defendants,” wrote Tipton in his ruling, adding that his ruling will give parties more time to “provide for a more fulsome record” to assist the court in “adjudicating Texas’s motion for a preliminary injunction.”

Well, if the media is too cowardly (or captured) to push back on the realities of illegal immigration and Republicans lack the power in Congress to be effective, it’s up to the states to limit the scope of Biden’s damage. Hopefully, they can keep this president tied up in the courts for the next four years until we can get back to the business of protecting America’s borders.