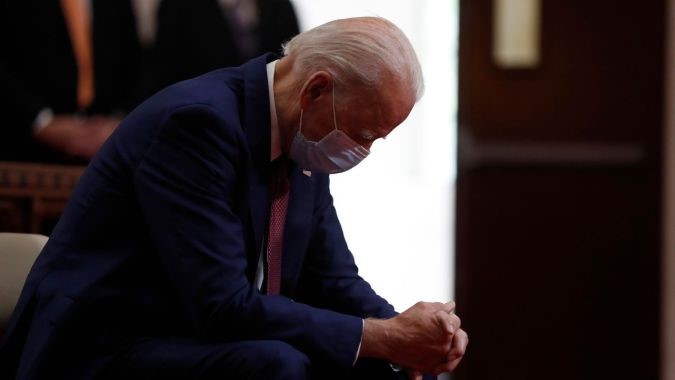 With “Catholic” Joe Biden declaring war on the unborn, heterosexuality, and traditional marriage, the Catholic Church bureaucracy in Washington, D.C. has surrendered to the forces of Cultural Marxism. Defying logic, common sense, and Catholic teachings, the Archbishop of Washington, Wilton Gregory, has decided that Biden is a Catholic in good standing and deserves Holy Communion.

Perhaps the prospect of dipping into the $1.9 trillion pandemic “relief bill” is a factor.

On February 7, Gregory gave a completely uninspiring recorded address to the Catholic congregations of the nation’s capital that failed to address in any way the federal assault on the teachings of the church on human life issues. Instead, as part of a special appeal for funds to subsidize the bureaucracy (in addition to the $1.4 billion in Covid-19 relief money already provided to the Catholic Church), he repeated a few Bible verses about seeking and finding truth, while talking in general terms about separating light from darkness.

The New York Times has declared that Joe Biden “is perhaps the most religiously observant commander in chief in half a century” because he “regularly attends Mass.”

Biden, who actually presided over a same-sex “wedding,” is making a mockery of the teachings of the church and leading the United States into further darkness. But Gregory, an enemy of former President Trump, knows this.

Biden’s reversal of the Trump ban on transgenders serving in the military is only the latest example.

Since military recruiters have already been going to gay “pride” events, we anticipate this will include not only paying for sex-change operations but active recruitment of transgenders, of the Corporal Klinger variety. The MASH television spectacle of Corporal Klinger wearing women’s dresses to get out of the military may now give way to the Pentagon actually permitting transgendered male soldiers to openly wear women’s military uniforms.

What’s more, as James S. Corum argues in American Thinker, much-needed medical funds will be diverted from military families to confused transgenders desiring to look like members of the opposite sex.

Perhaps the Pentagon will announce the formation of the Barney Frank Brigade, named after the former Congressman who once got mired in scandal after ordering a prostitute through a “hot bottom” ad in a gay paper.

Our once-feared military will become a global laughingstock.

It will only be a matter of time before conservatives and Christians start leaving the military in droves.

Beyond the corruption of the military, the Transgender Law Center is demanding that Biden implement a wide-ranging Trans Agenda for Liberation, including a focus on black trans women.

The frequently incoherent Biden cited his faith as a Catholic in supporting transgender rights, quoting Christ as saying, “What you’re doing to the least of my children, you’re doing to me.”

However, a document issued by the Vatican department overseeing Catholic education features a biblical quote in bold letters, “MALE AND FEMALE HE CREATED THEM,” while even left-of-center Pope Francis said in 2014, “Gender ideology is demonic.”

As Biden prepares to push the so-called “Equality Act” to benefit homosexuals, Catholics and non-Catholics alike know that the Apostle Paul in 1 Corinthians 6-9 said, “Or do you not know that the unrighteous will not inherit the kingdom of God? Do not be deceived: neither the sexually immoral, nor idolaters, nor adulterers, nor men who practice homosexuality…”

Wilton Gregory’s predecessor, Cardinal Donald Wuerl, resigned from his leadership of the archdiocese in 2018 after he was accused of covering up sexual abuse. His predecessor as archbishop of Washington was the disgraced former Cardinal Theodore McCarrick, the highest-ranking U.S. Catholic leader ever to be removed for sexually abusing a minor.

In an article, “How Joe Biden Will Open The Floodgates To Transgendering Public Schools,” Joy Pullmann noted that Biden “plans to quickly use executive power to push transgenderism in schools, farther than President Obama did.”

All of this is being done with the apparent official acquiescence of Catholic officials such as Wilton Gregory, even though Catholic schools will also be targeted.

Traditional Catholics such as Michael Hichborn of the Lepanto Institute are outraged and he came on America’s Survival TV discussing the “moral evils” being advanced by the Biden Administration on issues like abortion and transgenderism.

Brian Burch of the group Catholic Vote says the “devout” Joe Biden has been celebrating his election “victory” with more child-killing through pro-abortion executive orders. “Joe Biden is an enemy of life, period,” he says. “While he once held to some semblance of coherency on the life issue, he has since fully sold his soul to the Democratic Party’s War on the Unborn.”

In another shocking development, Dr. “Rachel” Levine, a man who wears lipstick and a dress and has been Pennsylvania Secretary of Health, has been nominated by Biden as Assistant Secretary of Health, a Senate-confirmed post. In addition to the controversy over his/her sexual identity, Levine sent many old people to their deaths from Covid in Pennsylvania nursing homes while saving his/her own mother.

We can expect the top officials of the Catholic Church to fall on their faces in subservience to Biden/Harris. But will Republicans challenge this bizarre nomination?

A Catholic World Report (CWR) journalist, Matt Hadro, was suspended by Twitter for posting this “hateful” comment: “Biden plans to nominate Dr. Rachel Levine, a biological man identifying as a transgender woman who has served as Pennsylvania’s health secretary since 2017, to be HHS Assistant Secretary for Health. Levine is also a supporter of the contraceptive mandate.”

Catholic League president Bill Donohue commented, “If Twitter can silence such innocuous speech as this, the free speech rights of all Catholic media outlets and websites are in jeopardy.”

It gets worse. Professor and author Paul Kengor points out that ads for his book on the evils of communism, The Devil and Karl Marx, and Carrie Gress’s book, The Anti-Mary Exposed: Rescuing the Culture from Toxic Femininity, have been blocked by Facebook. In addition, he says Facebook ads have been blocked for a new TAN Books title on motherhood,  Motherhood Redeemed: How Radical Feminism Betrayed Motherly Love, and a children’s book on the Stations of the Cross.

Of course, those like Wilton Gregory who toe the liberal line will be encouraged to speak out for Joe Biden and be praised for doing so.