Deep State Boasts of “Conspiracy” Against Trump in 2020 Election 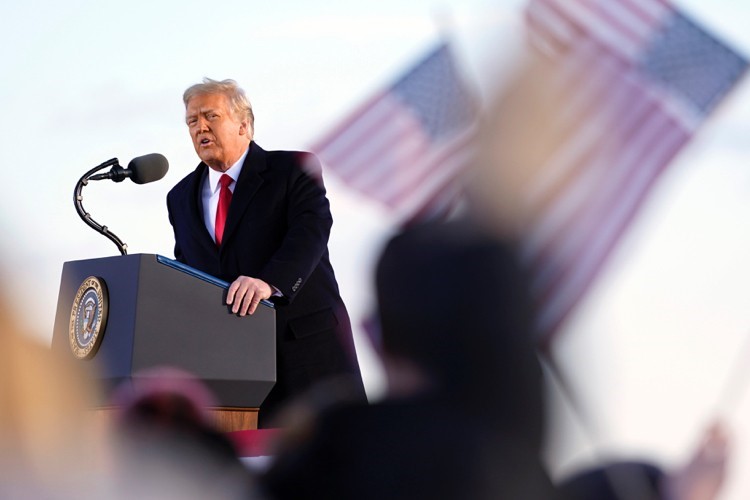 Deep State Boasts of “Conspiracy” Against Trump in 2020 Election

Now that they think their anointed is safely enthroned at the White House, the Deep State, through its propaganda mouthpiece Time magazine, is gloating over a “conspiracy” of Big Business, Big Tech, Big Government, Big Labor, and other powerful forces to oust President Trump from office. The behind-the-scenes operation has eerie parallels with “Color Revolutions” staged in foreign lands by the very same operatives who took down Trump.

In a piece by the far-left Time magazine headlined “The Secret History of the Shadow Campaign That Saved the 2020 Election,” propagandist Molly Ball gloats about it all. “There was a conspiracy unfolding behind the scenes, one that both curtailed the protests and coordinated the resistance from CEOs,” she wrote, saying Trump was “right” about the orchestrated plot to oust him. “Both surprises were the result of an informal alliance between left-wing activists and business titans.”

The conspiracy involved “a well-funded cabal of powerful people, ranging across industries and ideologies, working together behind the scenes to influence perceptions, change rules and laws, steer media coverage and control the flow of information,” Ball explained, bragging of her role as their mouthpiece to tell their version of the story without pesky fairness or even any opportunity to comment for victims of the effort.

One example she cited of the “alliance” of conspirators against Trump was a joint statement by the globalist U.S. Chamber of Commerce and the far-left AFL-CIO labor union published on election day. It involved Big Business and Big Labor joining forces to oppose what the propagandist describes, without giving details or evidence, as Trump’s “assault on democracy” — never mind that the true assault on self-government came from the conspirators.

But of course, as Time admits, that alliance between anti-American business bigwigs and far-left labor organizers was just the tip of the iceberg of the anti-Trump machinery that was working to destroy the president. “The handshake between business and labor was just one component of a vast, cross-partisan campaign to protect the election,” wrote Ball, touting a “loosely organized coalition of operatives” that was mostly on the left but included NeverTrump “conservatives” as well.

The Time propaganda piece, which the Deep State no doubt hopes will be the official historical account of the subversive actions, describes the scheme like this:

Their work touched every aspect of the election. They got states to change voting systems and laws and helped secure hundreds of millions in public and private funding. They fended off voter-suppression lawsuits, recruited armies of poll workers and got millions of people to vote by mail for the first time. They successfully pressured social media companies to take a harder line against disinformation and used data-driven strategies to fight viral smears. They executed national public-awareness campaigns that helped Americans understand how the vote count would unfold over days or weeks, preventing Trump’s conspiracy theories and false claims of victory from getting more traction. After Election Day, they monitored every pressure point to ensure that Trump could not overturn the result.

The New American magazine reported on much of this. In fact, in September, this writer exposed the schemers working on a “Color Revolution”-style campaign to overthrow President Trump by any means necessary. The plot — elements of which were almost certainly illegal — included many of the very same State Department and “Intelligence Community” operatives who had been using similar tactics for decades to overthrow Eastern European and Middle Eastern governments.

One of the key figures involved in the plot, we reported, was former Obama “Ethics” Czar Norm Eisen, who has been foaming at the mouth to remove the president for years. Interestingly, Eisen actually wrote the go-to manual on Color Revolution, known as “The Playbook,” before unleashing it in America against America’s elected president. Eisen’s strategies, by his own admission, are merely a continuation of those pioneered by the “originator and Godfather of the Color Revolution model.”

In the Time piece, the rabid anti-Trump hysteric gloats about it all. “The untold story of the election is the thousands of people of both parties who accomplished the triumph of American democracy at its very foundation,” Eisen is quoted as saying, adding that the “scariest moment” of the entire election was when Michigan’s Republican legislature considered sending Trump delegates to defeat what most GOP voters and even many Democrats across the state viewed as a blatantly rigged vote in Detroit.

While Eisen is described as “a prominent lawyer and former Obama Administration official who recruited Republicans and Democrats to the board of the Voter Protection Program,” the Time propaganda never mentions his long career as a “regime change professional” overthrowing foreign governments for the Deep State. If readers knew his history, they might find it a bit strange that he played such a key role in the “conspiracy” to supposedly defend “democracy” from voters, laws, and the U.S. Constitution.

Other key operatives in the plot include AFL-CIO schemer Mike Podhorzer, who is painted as one of the leading luminaries behind the conspiracy. Some of his co-conspirators included bigwigs at the tax-funded baby slaughterhouse Planned Parenthood, Greenpeace, George Soros-funded MoveOn.org, the Marxist-led Black Lives Matter movement, and countless others. Eventually, key figures from Congress (unnamed), the Big Tech totalitarians in Silicon Valley, and even state officials were brought into the conspiracy too. Facebook money helped finance part of the conspiracy, Ball reported. Big Tech censorship and algorithms to suppress truth that the anti-Trump forces viewed as “disinformation” were key, too.

Of course, much of Ball’s narrative in Time is simply fraudulent, as anyone can verify for themselves. For instance, propagandist Ball claims that when the media called the race for Biden on November 7, “jubilation broke out” and “people thronged cities across the U.S. to celebrate the democratic process that resulted in Trump’s ouster.” While tiny “throngs” may have come together in Democrat bastions such as New York and Los Angeles, across the rest of America, even the fake media’s polls showed average Americans believed it was rigged. Even a third of Democrats believed the election was stolen from Trump, polls show.

The propaganda piece never even touches on the countless affidavits offering massive evidence of systemic voter fraud across America. It also blatantly misrepresents facts that anyone can check. For example, Ball claims Trump urged his supporters in D.C. to “go to the Capitol and ‘fight like hell.’” That is a lie. Trump actually declared as a fact that “we fight like hell,” and added that “if you don’t fight like hell, you’re not going to have a country anymore.” When making comments on the Capitol, Trump urged supporters “peacefully and patriotically make your voices heard” there. Without noting that Trump repeatedly condemned the riots and called for peace, Ball also dishonestly claimed Trump called the rioters “very special.” In fact, he called his supporters very special and condemned the rioters on multiple occasions. Similar dishonesty can be found throughout the Time propaganda piece.

Time magazine has always been an important propaganda megaphone for the Deep State. It was founded a century ago by Henry Luce, a member of the “Skull and Bones” secret society infamous for occult death rituals and influential members. According to Stanford historian Antony Sutton, who wrote two books about the outfit, it serves as a recruiting ground for a conspiracy to create a one-world government that aims to control both sides of the debate — 2004 presidential candidates John Kerry and George W. Bush were both members, for instance, as was Deep State “conservative” hero William Buckley. Luce was also a key player in the Central Intelligence Agency’s “Operation Mockingbird,” which bankrolled hundreds of American “journalists” willing to prostitute themselves to serve as propagandists for the scandal-plagued CIA.

Ball actually admits and appears to relish the fact that she was chosen to serve as the mouthpiece for the “cabal” of conspirators, saying the “participants want the secret history of the 2020 election told.” The cabal was obviously behind her efforts, with Ball saying the “inside story of the conspiracy” she retells — at least the propaganda version the conspirators want you to believe — came from her exclusive access to “the group’s inner workings, never-before-seen documents and interviews with dozens of those involved from across the political spectrum.” In short, Time and its fake “journalists” now all but celebrate their role as establishment lapdogs who parrot Deep State propaganda to the public.

Once upon a time, journalists would have been ashamed to be known that way — but not anymore. Ball and Time magazine should be embarrassed to be used like this in peddling obviously one-sided propaganda. But at this point, with morality out the window, it appears that very few in media or politics have any shame left. Still, it may not be too late for accountability in the months and years ahead. Conspiracy, after all, is a serious crime.