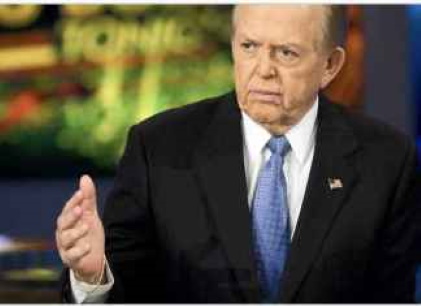 Lou Dobbs’ popular Fox show has been canceled and the network will part ways with the host, the LA Times reports. Mr. Dobbs is one of Donald Trump’s staunchest supporters. He fiercely stood by him and complaints of election fraud.

Dobbs, 75, was named with Maria Bartiromo, and Jeanine Pirro in a $2.7 billion lawsuit filed by Dominion Voting Services against Fox, announced yesterday.

The company claims the hosts perpetuated lies and disinformation about Smartmatic’s role in the election, damaging its business and reputation.

However, Fox News says that isn’t the reason Dobbs is being canceled. They are standing by their hosts, and claim the lawsuit is meritless.

“As we said in October, Fox News Media regularly considers programming changes and plans have been in place to launch new formats as appropriate post-election, including on Fox Business,” the representative said in a statement. “This is part of those planned changes. A new 5 p.m. program will be announced in the near future.”

Tonight is the last Dobbs telecast. Starting next week, the program will be called “Fox Business Tonight.” Rotating substitute hosts Jackie DeAngelis and David Asman, who filled in for Dobbs on Friday, will take over for now.

There go the ratings.

Dobbs, 75, remains under contract at Fox News but he will in all likelihood not appear on the company’s networks again. In addition to his Fox Business Network program, he occasionally turned up on the Fox News Channel as a commentator.

This is all quite sudden.

Donald Trump issued a statement on Lou Dobbs: “Lou Dobbs is and was great. Nobody loves America more than Lou. He had a large and loyal following that will be watching closely for his next move, and that following includes me.”

CNN claims ratings are an issue leading to the change. Axios believes that following the Capitol melee, the future of the Republican Party, in part, hangs on whether fringe conservative media or traditional conservative commentary will dominate with audiences.

They say “fringe,” not us. If I were to translate this, I’d say they are censoring Magas.

According to Axios, on the other side, Cumulus Media, home to many right-wing radio personalities, has told hosts to stop suggesting the election was stolen, the Washington Post reports.