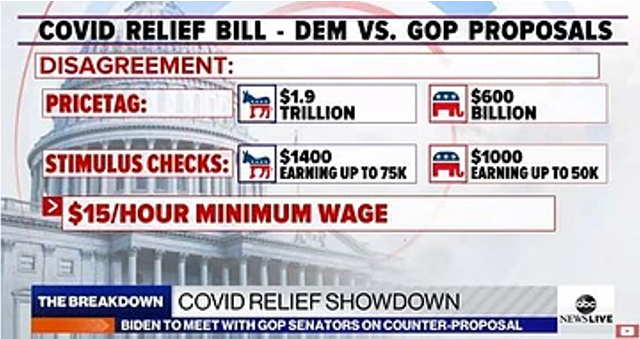 Being lost in a strange environment after sundown on a moonless night you quickly grasp that the absence of light is a real problem. Such is the experience of ill-prepared hikers in the mountains or tourists who misplaced their coordinates on a map — or politicians in Washington who made ridiculous promises during their campaigns and can’t push the proper buttons now that they’re steering the machine. President Joe Biden and his hysteria-spreading team is making the rounds calling for swift “relief” for everyone still trapped under the elusive China virus boulder. Vaccines developed under Donald Trump’s “Operation Warp Speed” are being stuck in as many arms as state and local governments can manage (not always competently, such as here in Virginia) and yet the federal authorities gain no perspective on what is truly needed — a grand reopening of the economy (with recognition of minimizing the danger to at-risk populations) and leadership that promotes sensibility and rational thinking rather than a “Chicken Little” sky-is-falling mentality. Earlier this week came word that a group of “moderate” Republican senators sought a slice from Biden’s fright pie, trying desperately to avoid the appearance that they’re cold and heartless budget consumed conservatives who favor allowing business owners and the people themselves to constitute a dominant portion of the thought equation. Susan Ferrechio reported at The Washington Examiner:

“Senate Republicans left a two-hour meeting with President Biden Monday evening with positive things to say about the exchange but no progress on a bipartisan coronavirus aid deal. “’It was a very good exchange of views,’ Sen. Susan Collins, a Maine Republican and top Senate bipartisan broker, told reporters after the meeting. ‘I wouldn’t say we came together on a package tonight. No one expected that in a two-hour meeting.’ Collins [also] said the two sides agreed ‘to follow up and talk further’ at the staff level, among Senate lawmakers and with the president and vice president, on an aid package… “Collins said Republicans appreciated Biden using his first Oval Office meeting with any lawmakers ‘to spend so much time with us in a frank and useful discussion.’”

In other words, if you’re a RINO hunter searching for the most fertile ground to conduct a RINO pursuit, you should’ve hovered outside the White House meeting with Grampa Joe and listened for sounds of groveling and pandering.

These brave (not!) Republicans tout the fact their “relief” package counteroffer only includes $600 billion (compared to Biden’s $1.9 trillion all-inclusive boondoggle) and is narrowly tailored to only shower certain recipients with additional federal largesse rather than tossing out money to each outstretched hand like Rich Uncle Pennybags of Monopoly fame. Forget the fact that Congress and President Trump threw together packages that totaled $4 trillion last year, which astute observers recognize is greater than an entire year’s federal budget revenue.

If “relief” is targeted for a temporary problem, then spending of that magnitude should’ve provided some tangible improvement. If so, why is everyone so unhappy now?

Remember when the COVID-19 issue sprouted last spring and the Washington powers-that-be rushed to fashion emergency provisions for personal protective equipment and other stuff that “only” costed a few billion? Ah, the good ol’ days when politicians (sort of) admitted that they didn’t actually know what they were dealing with and sought to ensure that emergency responders were well outfitted with the means to treat the afflicted because the supplies had run low and, and, and…

Then there was “15 Days to Slow the Spread” which grew into 30 days and governors and mayors (in almost exclusively blue states) decided that there was too much freedom and decreed through executive action that more entities had to close up completely to flatten the COVID curve and schools couldn’t dare reopen despite the fact kids weren’t getting sick and teachers could be assured the danger was manageable with reasonable precautions.

Here it is, February, 2021 and the kids in many places are still at home — except those in private schools, which opened their doors months ago and managed to remain in operation without major outbreaks — and the ruling class clamors for more “relief” to keep the shuttered true-believers content for a little while longer. Many people point out that much of last year’s appropriated “relief” dollars weren’t even used yet. And Joe Biden — and this collection of ten opportunistic Republicans — met to talk about shoveling out some more.

Isn’t it curious how there are ten Republicans in the group, just the requisite number needed to break a filibuster? Of course, the Democrat leadership wouldn’t bother with such things (like the filibuster) and plans to force through their bloated package along a straight-party vote and then use budget reconciliation to bypass the objections, but that’s a conversation for another time.

Democrats also face the possibility of a defector or two (particularly West Virginia’s Joe Manchin) if Biden, Nancy Pelosi, Chuck Schumer and company get too greedy. In essence, the so-called senate “moderates” of both parties are running the show these days since the numbers game can’t be played without remarkable factional discipline.

The “centrists” are guided by the false notion that there’s mythical wisdom in dividing the difference between the two parties somewhere down the middle rather than casting the idea out entirely and working outside the box to come up with something that makes sense. Seems to me that concocting and passing half of a bad idea still equals… a bad idea.

Who has the courage to stand up and say, “Enough is enough” and insist that Congress should be talking about ways to get people working again instead of papering over the problem with another round of feel-good but useless “relief” checks? Wouldn’t that type of “compromise” provide the light that the clueless politicians seek to illuminate the darkness? Or will another few dollars be enough to keep people afloat until the next round of elections?

By now it’s evident no one has the foolproof answer. The eternal lockdown contingent — led by public school teachers unions — demand to keep things closed forever. The other side has the better argument but there are always the “what if?” questions that can’t be answered. Politicians just want to use their power to spend and then deflect blame to good intentions when it goes haywire.

In essence, we’re doomed to remain in obscurity. It’s dark out there, ain’t it?