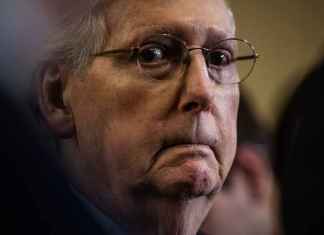 Senate Minority Leader Mitch McConnell will force Democrats to vote on giving the $1.9 trillion in handouts and bailouts to illegal aliens and schools that refuse to open.

Senate Republicans are set to force Democrats to cast votes on various potentially uncomfortable topics in the coming days, taking advantage of the rules of the budget reconciliation process Democrats are using to advance the wasteful wealth redistribution package.

During that time, any senator is entitled to file an amendment to the resolution, which could result in dozens of votes on various provisions going late into the night and even early into Friday morning.

Republicans strongly oppose the fact that Democrats are using reconciliation to advance the coronavirus stimulus and therefore plan to use the vote-a-rama as a way to expose Democrats.

“The new President talks a lot about unity, but his White House staff and congressional leadership are working from the opposite playbook,” Senate Minority Leader Mitch McConnell, R-Ky., said of the budget reconciliation process. “We’ll be discussing the facts… Senate Republicans will be ready and waiting with a host of amendments to improve the rushed procedural step that’s being jammed through.”

He added: “We’ll be getting senators on the record about whether taxpayers should fund checks for illegal immigrants… whether Democrats should raise taxes on small businesses in the midst of this historic crisis… and whether generous federal funding should pour into school districts where the unions refuse to let schools open. And this is just a small taste.”

Sen. Josh Hawley. R-Mo. introduced an amendment that would oppose federal funding from schools that don’t get kids back in classrooms.

“In spite of overwhelming evidence that schools can reopen safely, partisan advocates are using children’s education as a cudgel to push their radical agendas,” Hawley said in a statement along with the amendment. “The effect on children and working-class families has been absolutely devastating. The federal government should put an end to this two-tiered education system for the haves and the have-nots by incentivizing schools to safely reopen.”