The Sham Impeachment, Biden Corruption & The Assault on The First Amendment 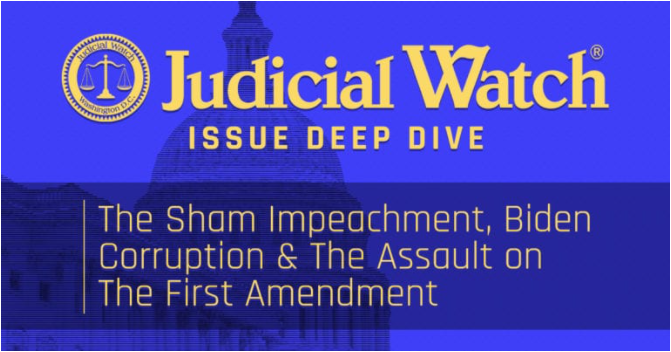 The Sham Impeachment, Biden Corruption & The Assault on The First Amendment

‘I’m terribly concerned that the Biden administration … is going to use the leverage of power, as the Obama administration did, to target the political opposition,’ Fitton stated in Friday’s Weekly Update

America has a new administration, and Judicial Watch is working hard to defend the Left’s ongoing attacks on election integrity, the Constitution, and our nation’s laws. Whether it’s undermining your constitutional rights, promoting unrestricted illegal immigration, or silencing concerns about corruption, the Biden presidency is likely to be worse than the Obama Administration, Fitton explained. “You’re a terrorist if you object.…that’s their thinking.” Fitton remarked that Biden’s inauguration speech was “a dogwhistle to the Left and to Big Tech … keep on taking steps to effectively outlaw dissent here in the United States.”

As discussed in last week’s Issue Deep Dive, Fitton believes that the Left’s rushed impeachment proceedings in Congress are an assault on the First Amendment. In his latest Weekly Update, Fitton argued that “If they found him [Trump] guilty, that would be devastating to the First Amendment because it would be a green light to attack and remove others that engage in core political speech that all of a sudden would be criminalized if the Left doesn’t like it.” The impeachment vote, in Fitton’s view, rolled over the civil rights of the president. “They wouldn’t let him make a presentation, or call witnesses, there were no hearings, no defense… And so are they going to do that with the trial?” he continued.

As with President Trump, Fitton is also regularly the target of Big Tech censorship. Having been “locked out” of Twitter, Fitton reminded viewers this week, “we’ve got to be prepared to push back, and we do it through the law.”

From a policy standpoint, the Biden administration is introducing equally alarming precedents, Fitton argued. The administration “issued a notice through his acting secretary that effectively will shut down all immigration enforcement in the United States.” Remarking on the absurdity of these policy changes, Fitton reminded viewers that “We’ve got a number of Freedom of Information Act requests about these policies … we have dozens of lawsuits against the Biden administration.” Judicial Watch is also still investigating allegations of corruption in the Biden family, specifically as it relates to then-Vice President Biden’s connections to China, and his son’s dealings with Burisma. “We’re still going to be pushing for justice. Someone’s got to do it.”

As Fitton concluded, “we’re ready to go to court to hold them accountable.… It’s going to be a busy year for us, and don’t despair because you have wonderful tools under law.” If you’re concerned about corruption in the Biden administration sign our petition, and support Judicial Watch today!