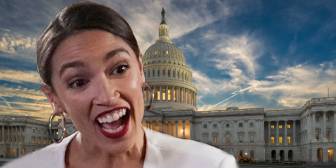 AOC the High Priestess of Thumbsuckers

Truth-trouncing AOC is a must to bring an end to the hysterical hyperbole of unscrupulous politicians like the former bartender from Manhattan’s Union Square.

Senator Ted Cruz didn’t try to get AOC killed—and for that matter, neither did anyone else.

All Democrat Congress members climbed under their desk or took shelter in corners during that shameful day on January 6—fearing—or at least pretending to—for their very lives.

Tragically, it was unarmed Air Force veteran Ashli Elizabeth Babbitt and four others, including a police officer who lost their lives to the raging mob that fateful day.  Two police officers who later committed suicide were added to their numbers this week.

Not a single hair on the heads of any politician serving public office was harmed.

So the melodrama of the Democrats who feared for their lives on that dreadful day should get off the stage.

“And he said Ocasio-Cortez benefits from a willing media to deliver her message.”

“Nunes was referring to Ocasio-Cortez’s response to Sen. Ted Cruz, who agreed with her in a post about the Robinhood app.

“She responded, “Happy to work w/ almost any other GOP that aren’t trying to get me killed. In the meantime if you want to help, you can resign. While you conveniently talk about ‘moving on,’ a second Capitol police officer lost their life yesterday in the still-raging aftermath of the attacks you had a role in. This isn’t a joke. We need accountability, and that includes a new Senator from Texas.”

“Her comment about a willingness to work with others in the Republican Party seemed to be in contrast to her remarks Wednesday night on MSNBC that this term, “There are legitimate White supremacist sympathizers that sit at the heart and at the core of the Republican caucus in the House of Representatives.”

“Democrats have assigned blame to former President Trump for inciting the crowd prior to the deadly riot. Many, like Ocasio-Cortez, also blamed Republicans who expressed doubt about the election results and for perpetuating what they saw as an unfounded claim of voter fraud.

“Most Republicans, like Sen. Rand Paul, have called out Democrats for what they see as a clear double standard. They point to the riots in the U.S. during the summer and ask why these same Democrats didn’t do more to calm the tension.

“Nunes told Sean Hannity, the show’s host, that the more Ocasio-Cortez accuses Cruz and the Republicans of being evil, “the legacy mainstream media will continue to repeat it and it will become the truth out there in the ‘hinterlands’ of Manhattan.”

“Rep. Chip Roy, R-Texas, sent House Speaker Nancy Pelosi a letter calling on Ocasio-Cortez to apologize for the tweet, or we “will be forced to find alternative means to condemn this regrettable statement,” the Washington Examiner reported.”

How, exactly, did Sen. Cruz and any “other GOP member” try to get AOC killed?

“Happy to work with almost any other GOP that aren’t trying to get me killed”?

How, exactly, did Sen. Cruz and any “other GOP member” try to get AOC killed?

As AOC and all other Democrat-Socialists know if you tell a lie often enough, it has a good chance of becoming the truth.

Knowing that makes AOC the High Priestess of Thumbsuckers.

Trounce AOC with the truth, and truth-trounce her NOW.

RSS Feed for Judi McLeod
Judi McLeod is an award-winning journalist with 30 years’ experience in the print media. A former Toronto Sun columnist, she also worked for the Kingston Whig Standard. Her work has appeared on Rush Limbaugh, Newsmax.com, Drudge Report, Foxnews.com.