Lies, Rewritten History, and a Bust In the Oval Office 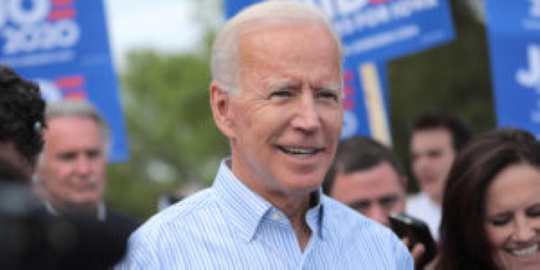 Lies, Rewritten History, and a Bust In the Oval Office

On the first day of his occupation of the White House Oval Office, it was reported that Joe Biden quickly removed the bust of Winston Churchill and replaced it with one of Cesar Chavez. This move is supposed to demonstrate Biden’s support for the working man. 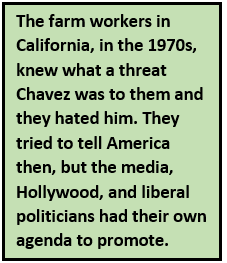 Cesar Chavez has been portrayed to the American public as a hero and champion of poor Hispanic migrant workers who, it was claimed, were paid mere pennies to work in the grape and lettuce fields of California. According to the tale, the farmers got rich off the backs of the migrant labor, selling the lettuce and making expensive wines from the grapes. Meanwhile the poor, misused migrants carried meager belongings on their backs and traveled from farm to farm, hoping to find work, perhaps a meal, and a place to sleep. Even little children were forced to work in the fields – just to keep the family alive. So goes the tale.

Into the breach of this John Steinbeck vision of misery steps one of the workers who braved the wrath of the “MAN.” Cesar Chaves, so the tale continues, stood bravely against threats of bodily harm, maybe even death, to help bring the poor migrant workers a decent wage and stable working conditions. To stand as their champion, he created the United Farm Workers Union (UFW), organized protests, set up picket lines, and staged fasts to get the media’s attention. His minions took on the battle cry “Huelga” (strike) and called on all Americans to boycott “non-union” lettuce and wines.

In an era of unrest and college protests, students across the nation took up the battle cry and participated in the boycotts. It became fashionable for liberal leaders to stand with Chavez. California Governor Jerry Brown (the first term) joined Chavez and all the usual Hollywood celebrities in protest marches in Sacramento. Bobby Kennedy flew in to embrace him for the cameras during his fasts.

And now, Chavez is forced again into the nation’s reconstructed memory through Biden’s dramatic flair, putting Chavez’ image right there behind the Resolute desk of the President of the United States as an American hero.

Well, here are facts about Cesar Chavez that you will never read in a school text book or current history book:

Chavez was well trained in the Alinsky propaganda and organizing techniques that are, still today, recognized as the most effective tools to misdirect and force radical ideas into the general population.

For the most part, the workers which Chavez picked on were not migrants, instead, lived in nice homes, in stable neighborhoods and made a decent wage. The only migration they did was to move from farm to farm in their area to harvest the crops. It provided them steady work with farmers who regularly employed them.  At night, they slept in their own beds.

And so, for more than ten years, Cesar Chavez used the media, politicians, Hollywood, and college students to change the buying habits of the nation and paint a picture of big business oppressing the poor.

In 1974, when I served as Ohio Chairman of Young Americans for Freedom (YAF), I was also running for a seat in the Ohio legislature. My district was a small slice of Columbus that included the Ohio State University. My opponent was a dedicated left wing radical. The district contained no farm land other than the agriculture department of the university. Yet, the main issue of our campaign became the debate over Cesar Chavez and the United Farm Workers.

In March of that year, Chavez came to the OSU campus. My opponent in the legislative race, Representative Mike Stinziano, was a major supporter of Chavez and, consequently, seated next to Chavez on the stage. Before the program began, I was out front of the auditorium manning a picket line and protest. Eventually, as Chavez prepared to speak, I and my fellow picketers marched inside the auditorium, straight down the aisle and sat on the edge of the stage. Rep. Stinziano and I eyed each other in this strange setting for a political campaign.

Chavez began to speak to the wide-eyed college students, teaching them organizing songs and getting them to shout “Huelga.” Then Chavez began to spin a tale of the terrible conditions of the poor non-union workers as they suffered in the fields. Paul Bunyon would have been impressed. He told the students that to get around paying for his unionized workers, the cheapskate farmers had developed a devise to mechanically harvest the grapes. He said it was a huge vacuum designed to suck the grapes off the vine. But, said Chavez in a hushed tone, the machine also sucked up spiders, snakes and rabbits, all to be processed into the wine. As the crowd began to stir and make faces at the thought of it, Chavez quickly added, “So, if you won’t boycott Boones Farm wine for our cause, at least do it for your own health.” That was Cesar for you… always concerned about the well being of others!

Two months later I was invited to Toledo University by the local YAF chapter there to provide rebuttal to a separate appearance by Delores Huerta, Vice President of the United Farm Workers Union.

She taught the students the same organizing songs, peppered with the chants of “Huelga.” Then she proceeded to tell the same story of the great machine. Only this time she described it, not as a great vacuum cleaner, but as a picker with huge mechanical fingers that plucked the grapes along with the snakes, rabbits, and spiders. I pointed out to the audience that if the UFW was going to fan out across the country to tell lies, they should at least be consistent lies.

Huerta proceeded to call for a boycott of all “non-union” lettuce and grapes. I again pointed out that many of the farm workers picking the grapes were, in fact, members of the Teamsters Union and had been so for many years. I asked when the Teamsters became non-union and the only response offered was that I was a Teamster lackey! Sigh…

What Chavez and Hureta both failed to tell the audience was:

So, in this age of irrational double-speak and rewritten history, schools, streets, and parks are named after Chavez, holidays are declared, and even a movie was made to enshrine his legacy as a defender of the oppressed poor. Now Biden puts his image in the Oval office, calling him an American hero.

Labeling Cesar Chavez an American hero is akin to labeling Lenin, Stalin, and Trotsky as Russian heroes. The farm workers in California, in the 1970s, knew what a threat Chavez was to them and they hated him. They tried to tell America then, but the media, Hollywood, and liberal politicians had their own agenda to promote. And so, puffed up on their own “compassion” and in the name of their version of justice for the poor, they sacrificed the very people they claimed to help… all for the “cause.” Does that sound familiar?

A good start to reclaiming American freedom would be to relegate Chavez to the trash heap where he belongs. It’s time to push back.

A native of Ohio, he’s been a candidate for the Ohio Legislature, served as editor of two newspapers, and has owned several businesses since the age of 23. In 1989 Tom led the only privately-funded election-observation team to the Panamanian elections. In 2006 Tom was invited to Cambridge University to debate the issue of the United Nations before the Cambridge Union, a 200 year old debating society. Today he serves as Founder and President of the American Policy Center and editor of The DeWeese Report.

For 40 years Tom DeWeese has been a businessman, grassroots activist, writer and publisher. As such, he has always advocated a firm belief in man’s need to keep moving forward while protecting our Constitutionally-guaranteed rights.