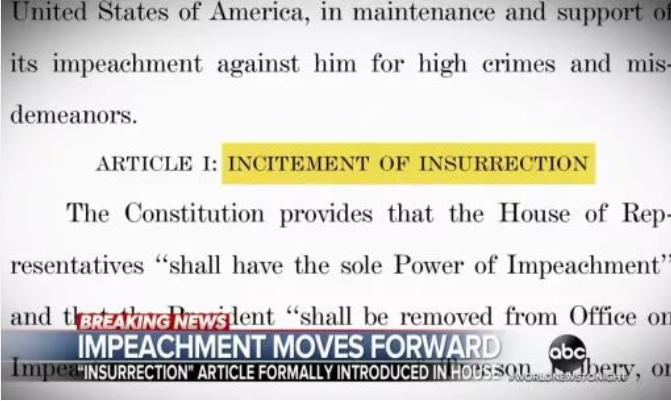 Trump-deranged Democrats and establishment Republicans and their allies in the media have relentlessly promoted the deceit that in his January 6, 2021 speech to supporters then-President Trump incited an insurrection against the United States, and thus merits impeachment.

That Democrats were already talking about impeaching President Trump for availing himself of last-ditch constitutional measures to preserve his presidency in the face of well-documented evidence of election fraud is a strong tell that they intended to lash Donald Trump out of Washington no matter what happened on January 6.

But let’s assume for a moment that this second impeachment of President Trump was not a political vendetta and examine the evidence to see if there really is a case as stated in the House-passed Articles of Impeachment.

The charge is that Mr. Trump incited the crowd at his January 6, 2021 “Stop the Steal Rally” to engage in an insurrection against the government of the United States, so the charge must therefore stand upon his actual words at the rally.

A fair reading of the transcript of his remarks reveals no such incitement, “We have come to demand that Congress do the right thing and only count the electors who have been lawfully slated, lawfully slated. I know that everyone here will soon be marching over to the Capitol building to peacefully and patriotically make your voices heard,” was Mr. Trump’s direction to the crowd.

In fact, the Washington Post reported that the riot at the Capitol began at least 20 minutes before Mr. Trump finished speaking, begging the question how his remarks could have “incited” people who were unlikely to have heard them and were already brawling with police.

What’s more, the authorities have revealed that extremists on both the Right and the Left had been making threats and organizing for violence for weeks leading up to the brawl at the Capitol. The massive security failure in the face of a known and publicized threat hardly constitutes an “insurrection” and the almost universal use of the term during and after the January 6 riot suggests more of a political narrative than a legal analysis.

So, what is an “insurrection”?

Whoever incites, sets on foot, assists, or engages in any rebellion or insurrection against the authority of the United States or the laws thereof, or gives aid or comfort thereto, shall be fined under this title or imprisoned not more than ten years, or both; and shall be incapable of holding any office under the United States.

There is no specific definition setting forth the elements of the crime of “insurrection” in the U.S. Code, unless one uses the “know it when we see it” standard one is forced to rely upon the similar crime of “Seditious conspiracy” for guidance and that is defined as acts to “overthrow, put down, or to destroy by force the Government of the United States, or to levy war against them.”

The plain meaning of Mr. Trump’s remarks on January 6, 2021 could in no way be construed as encouraging others to “overthrow, put down, or to destroy by force the Government of the United States, or to levy war against them.”

Far from encouraging the overthrow of the government, Mr. Trump was asking that every constitutional measure be used to preserve his presidency. This is nothing more than any of us should be entitled to expect – that the Constitution’s limits be vigorously explored in a quest to protect our rights.

It seems that for the charge of mounting an insurrection to hold Mr. Trump would have had to call for armed resistance to the incoming administration – which at that time hadn’t even been confirmed yet.

If then-President Trump had conjured-up some rogue elements of the military to maintain him in power that would have been a clear act of insurrection, but he did no such thing. Indeed, the violence on January 6, 2021, such as it was, was not directed at the government of the United States in general, or even Joe Biden, it was directed at Congress.

And Congress is not the government of the United States, but merely one element of it, and in disputes with the executive Congress can hardly be allowed to claim that perfectly constitutional acts by which the executive attempts to preserve its continuity constitute “insurrection.”

So, if Mr. Trump did not incite the riot at the Capitol, and if he was exercising his constitutional rights to ask for Electoral votes he believed to be tainted to be rejected, and if he undertook no armed effort to the overthrow the government that at that time he actually headed, how can he be charged with inciting an “insurrection” against the government of the United States?

The answer is he can’t be, unless of course “insurrection” is now a political matter as opposed to criminal matter.

The Framers of the Constitution were well-aware of the legislative excesses of the English Civil War where a faction of the Legislature, the Rump Parliament, claimed all power to itself, including the right to try and execute whom they pleased among those who had the temerity to defy them. This second political impeachment trial of Donald Trump is the ultimate test of whether our constitutional safeguards hold or whether we are about to embark on a new era of bills of attainder and persecution of domestic enemies designated by the legislature.

Call the toll-free Capitol Switchboard (1-866-220-0044), tell Republican Senators that there is no jurisdiction for the Senate to try a citizen of the United States and that they must vote against the continued persecution of Donald Trump.