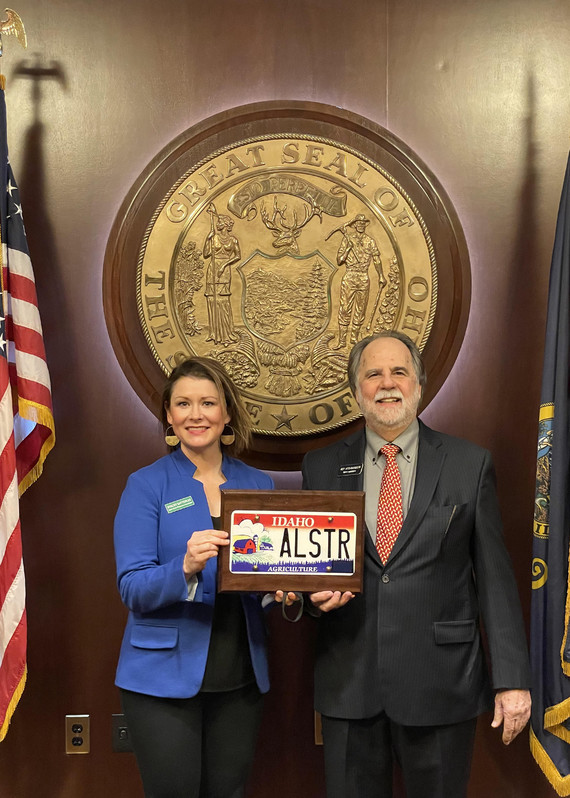 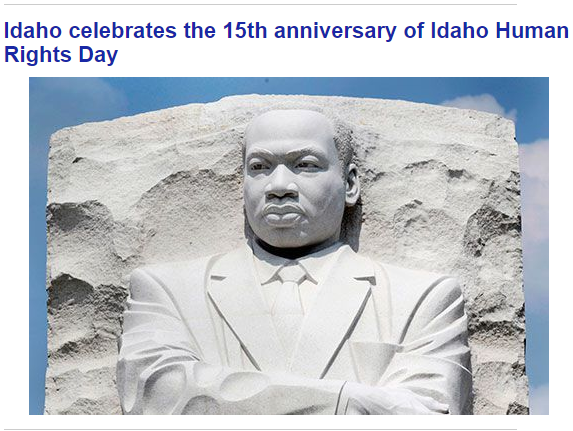 January 18th marked the fifteenth anniversary of Idaho Human Rights Day, also known as Martin Luther King Jr. Day. Created in 2006 by Governor Dirk Kempthorne, the holiday was deemed a time to focus on human rights while embracing diversity within the state of Idaho.

While traditionally celebrated with official state ceremonies attended by hundreds of people in the Capitol rotunda, this year’s pandemic prevented any speeches, music events, presentations from the Governor, or marches from BSU to the Capitol from taking place. In previous years, the march was composed of citizens from all over the Treasure Valley.

Although Governor Little did not read a proclamation publicly, he published an official proclamation stating that “The ideals of Dr. Martin Luther King Jr., and Idaho’s commitment to Human Rights, are worthy of reflection and serve as a reminder that improving the quality of life for all members of society is everyones’ responsibility.” In addition, both the House and Senate honored Martin Luther King Jr. Day by reflecting on King’s contributions and life. 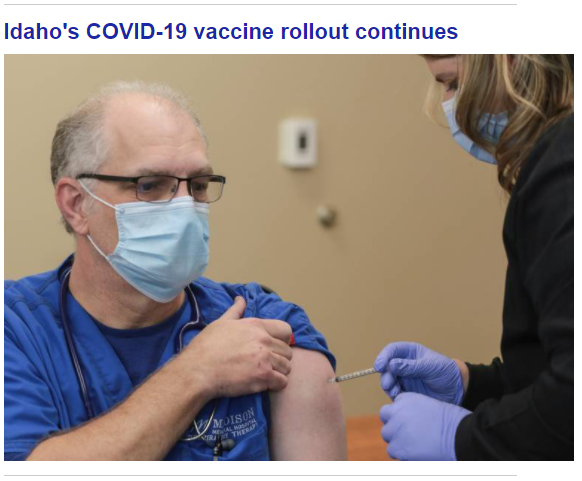 The Coronavirus vaccine rollout is progressing well in Idaho. This is one of Governor Little’s number one priorities. The Governor’s Office announced that Idaho has administered 69,398 doses of the vaccine as of this week, including 33,000 to long-term facility staff, residents, and healthcare workers. Focus will shift to vaccinating the general 65+ population starting in February, and Governor Little expects about 160,000 doses to be delivered each month. An extra 150 National Guard members were activated this week to help with distribution, bringing the total number of National Guard to 400. In addition, Idaho will soon provide COVID-19 Capacity Safety and Reporting grants to vaccine providers using federal assistance funds.

The vaccine will be available at hospitals, pharmacies, and doctors’ offices. Idahoans are encouraged to contact their local public health district for information on access and availability. Please visit the official Idaho Coronavirus webpage for daily updates on the virus and response. 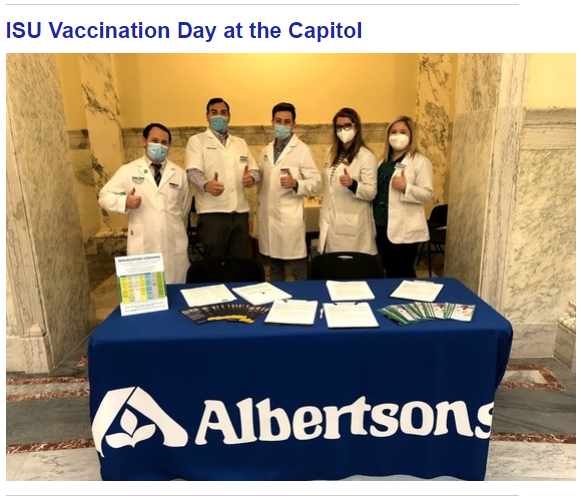 Last week, Idaho State University (ISU) Nursing students and staff arrived at the Idaho Legislature. A table for Legislators was set up on the 4th floor rotunda where Senators, Representatives, and legislative staff could receive flu, shingles, and pneumonia shots.

The mission of the ISU Nursing Program includes: increasing research and scholarly productivity, as well as developing innovative service opportunities for students and faculty to improve the health of rural and diverse populations. The Capitol was honored to have them this week and many vaccinations were administered.

Idaho on the move

More Americans are moving to Idaho than any other state. United Van Lines ran a study showing that 67.4% of all moves in America in 2019 and 70% in 2020 were made to Idaho.

With retirement being their primary motivation for relocation, 41% of people moving to Idaho are 65+.

Most inbound moves come from the states of California and Texas.

Legislation at a glance

H0001: This bill would amend Section 46-1008 of Idaho Code to limit the duration and consequences of a disaster emergency declaration by the Governor. The Governor would not be able to suspend any Constitutional rights of Idaho citizens, prevent them from working/providing for their families, or alter or suspend any provisions of Idaho code. Emergency declarations would only last for thirty days unless extended or terminated by the Idaho Legislature. Any existing emergency declarations that have lasted longer than thirty days would be automatically terminated. The bill was printed and referred to the House State Affairs.

H0002: Full disclosure of anticipated tax increases on bond and levy ballots would be required under this bill. Information that is not relevant to the bond or levy in question, such as any past/proposed/current bonds, levies, or other matters, would not be allowed on the ballot. The bill was printed and referred to the House State Affairs.

H0003: The “Reasonable Childhood Independence Act” would define child neglect in terms of children being put into explicit danger or denying them essential care. Actions such as allowing them to walk to/from school unsupervised or being home alone for a short amount of time would be excluded from the definition. The bill has been printed and referred to the House Judiciary, Rules, and Administration.

H0004: This legislation modifies Idaho’s Parental Rights statutes to state that emergency orders and disaster declarations cannot allow abridgement of the parental rights described in those statutes. The bill was printed and referred to the House Judiciary, Rules, and Administration.

H0005: This bill would clarify the intent of Idaho’s driving code to state that the use of global positioning and navigation features on mobile electronic devices by vehicle operators is allowed as long as those features are hands-free. The bill was printed and referred to the House Transportation and Defense.

H0007: The State Treasurer would be empowered by this bill to hold portions of state funds in physical gold and silver. The bill was printed and referred to the House State Affairs.

HCR001: This concurrent resolution would end the disaster emergency declared by the Governor. The resolution was printed and referred to the House State Affairs.

HCR002: This concurrent resolution would lift the restrictions on group sizes of ten or more imposed by the Governor’s emergency declaration. The resolution was passed out of the House State Affairs with a Do Pass recommendation and filed for its Third Reading in the House.  HJR001: This joint resolution would amend the Idaho Constitution to allow the Legislature to convene itself into an extraordinary session within 15 days of a written request of 60% each of the House and Senate membership. The bill passed the House with a vote of 51-18-1 and was introduced to the Senate. It was referred to the Senate State Affairs.

S1002: The intent of this legislation is to ensure that an emergency declaration may end while still preserving the state’s ability to continue receiving funds to assist in recovering from such an emergency. The bill was printed and referred to the Senate State Affairs.

S1003: This bill updates the authority of the Governor by modifying Section 46-601 of Idaho code. It renames extreme emergencies in the code as extreme perils and places limits on the extent and duration of such periods.  States of extreme peril must end within thirty days of their declaration unless the legislature passes extensions. Restrictions on citizens’ constitutional rights and ability to work are prohibited, as are the alteration or suspension of statutes by the Governor. The bill was printed and referred to the Senate State Affairs.

S1005: This legislation would modify Idaho Code 42-105 to clarify that a fee and not an assessment shall be levied when water is diverted in one water district but conveyed and redirected within a second water district. The bill was printed and referred to the Senate Resources and Environment.

S1006: This legislation would consolidate current statutory requirements for literacy intervention and update provisions in alignment with the Task Force recommendation for focusing on the importance of having every student reading at grade level by the end of grade 3. The bill was passed out of the Senate Education Committee with a Do Pass recommendation and is filed for its Second Reading.

SCR101: This concurrent resolution would immediately terminate the COVID-19 emergency orders issued by the Governor while maintaining those declarations necessary to keep federal funding available for Idaho’s National Guard, first responders, health care providers, and communities. The concurrent resolution was passed out of the Senate State Affairs Committee with a Do Pass recommendation and is on the 10th order.

SJR101: This joint resolution would amend the Idaho Constitution to prohibit the production, manufacture, transportation, sale, delivery, dispensing, distribution, possession, or use of psychoactive drugs. Exceptions are allowed for prescription drugs approved by the U.S. Food and Drug Administration and drugs used in clinical trials. The bill was passed out of the Senate State Affairs Committee with a Do Pass recommendation and is on the 10th order.