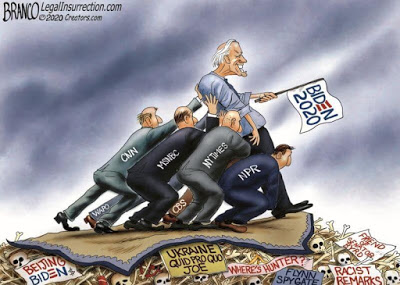 The past few days have been surreal, watching the corrupt propaganda arm of the Democrat party aka the media, cry in joy over Joe Biden, feel chills watching his plane land, celebrate and basically prove every word conservatives have said about them over the course of the last five-plus years.

We knew the hostility and vitriol the media perpetrated against President Trump would be nowhere to be found when they reported on Joe Biden, but this great media suck up is actually quite nauseating.

That is not hyperbole or any type of exaggeration, as readers can see for themselves below.

Those are just a few examples of what to expect over the next few years.

Some of the examples are so egregious they have even made their fellow liberal “journalists” cringe and call them out over it, such as Politico’s Jack Shafer on Thursday.

Washington’s public works department should have built an emergency system of drainage ditches, culverts and tunnels to divert into the Potomac River the torrents of praise, approval and adoration the press poured down on President Joe Biden on Inauguration Day. At one point in the early evening, citizens living in low-lying portions of the city were at risk of drowning in the flash-flood of commendations that flowed during the day-long pageant.

Shafer provided some great examples of the great media suckup in his piece titled “How About a Little Sobriety, Please?”

A more detailed list of examples found over at Daily Mail include the following:

Let me offer a reminder: It has only been three days!!!!!

It is going to be a long four years, if Dementia Joes health lasts that long, and even if it doesn’t, they will simply fawn over #HeelsUpHarris.

New York Times, did their best to try to convince people they are a non-biased and objective news organization.

Stop laughing!!!! Ok, so yeah, it is a little funny in a morbidly strange way. Note to the Times: That ship sailed years ago.

One of their senior editors, Lauren Wolfe, claimed she felt chills while watching Joe Biden’s plane landing, and then attempted to lie about president Trump, claiming he refused to offer a military plane for Biden’s use.

Of course those tweets were deleted when news filtered through that Biden chose to use his own plane.

So back to the NYT.  They reportedly canceled her contract despite the fact that they showed as much, if not more, contempt for President Trump during his presidency, as well as his tens of millions supporters.

Her fake news dig at Trump over the plane, brings us to another aspect of the great media suckup.

THEY CANNOT THRIVE WITHOUT TRUMP

The media made it their only job to attack, criticize, undermine and outright lie with fake news about President Trump and his supporters for years, and now that Trump is no longer in the White House, it appears that they are having an issue understanding what the heck they are supposed to be doing now.

This was shown not only in Wolfe’s false assertion about Trump not sending the military plane, which she called “childish,” because the natural desire for these media suckups is to “attack Trump,” and they cannot seem to move away from that mindset.

Some media personalities started wondering what they would do without President Trump to attack or criticize or in many cases (CNN!) deliberately publish fake news about, right after the election.

But Trump’s endless media-bashing has also desensitized many news outlets to Republican accusations of bias. And while they’ve learned to tune out bad-faith criticism, they’ve also soaked up plaudits from their new fans. One cable-news anchor told me that praise from anti-Trump celebrities on Twitter has become like a “narcotic” for some of his colleagues. “It’s important to people that George Takei likes their monologue,” the anchor said, requesting anonymity to speak candidly about his peers (and presumably to avoid alienating George Takei).

I see a lot of careers simply stopping where they are at because they have nothing left to offer the radically liberal “Resistance”  without President Trump, and most understand how fast a liberal will throw someone away when they no longer have any use for them.

The LA Times acknowledges the new problems for the media, but one statement from a recent piece, says it all: “It’s never pretty for a hit TV show when it loses its biggest star.”

That piece was titled “How will cable news thrive without Donald Trump in the White House?”

Sure CNN will still be around and survive, but they won’t thrive.

Neither will NYT, Wapo, or even Fox News after angering their conservative base, which is why liberals are on an all out attack against NewsMax and One American News Network, because those are the last bastions of conservative leaning news that are becoming highly popular.

Over the next year, liberal news outlets will be attempting to squeeze out as many hits against Trump as they can. The theatrical “impeachment,” trial in the Senate, which liberals would need 2/3 of the Senate to vote for in order to convict and strip Trump of post-presidential benefits, can last the media a couple of months.

The Washington Examiner recently reported that Florida, where President Trump moved to, will be the new HQ for the MAGA movement, so that too will give liberal media, who put all their eggs in the “attack Trump basket,” a little more of a career life-span.

Without Trump, they go back to being nothing more than suck ups for a Democrat administration.