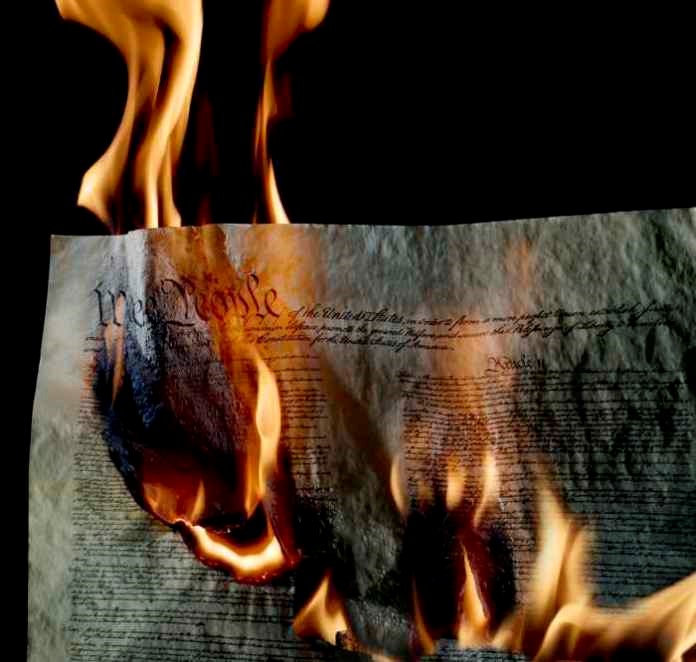 U.S. Constitution with “We The People” buring against a black background.

The Democrats introduced HR1, a bill that will destroy our country. It nationalizes the vote, and makes every corrupt form of voting legal, and ends voter ID nationwide. It allows ballot harvesting, felon voters, a path to DC statehood.

That majority and the power that comes with it is what open borders is about. It’s what the demonization of Trump and his supporters is about.

These people are absolutely neo-communists. No one but fascists, communists, Nazis would do something like this.

The bill would ensure Democrats win all elections in perpetuity. HR1 goes under the guise of protecting our elections, for the people.

In an op-ed at The Washington Post in January 2019, Senate Majority Leader Mitch McConnell called it the Democrat Politician Protection Act.

The hard-left loves the bill. It’s called For the People Act.

McConnell wrote: They’re trying to clothe this power grab with clichés about “restoring democracy” and doing it “For the People,” but their proposal is simply a naked attempt to change the rules of American politics to benefit one party.

They want to get rid of the neutral FEC and replace it with partisan federal workers.

Pelosi and company pitch new taxpayer subsidies, including a 600 percent government match for certain political donations and a new voucher program that would funnel even more public dollars to campaigns, he wrote. Since these monies traditionally go to Democrats, it’s a donation to Democrats.

The legislation dedicates hundreds of pages to federalizing the electoral process. It would make states mimic the practices that recently caused California to create 23,000 incorrect voter registrations. The measure would make it harder for states to fix inaccurate data in their voter rolls.