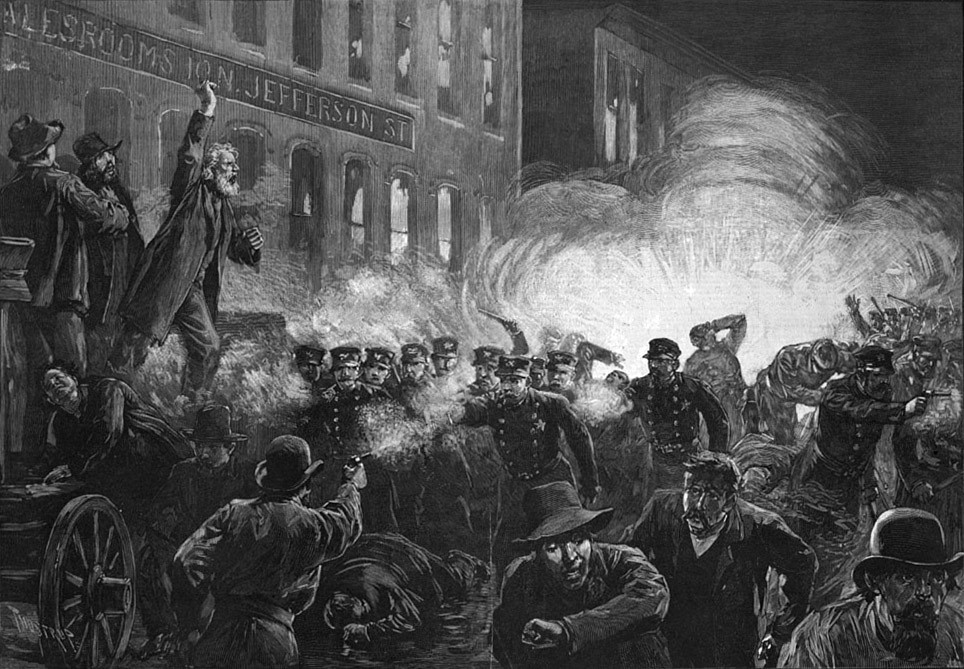 The anarchist movement has a long history and encompasses a wide range of movements from the labor movement to the free love movement, from anarcho-communism to Rothbardian economics. Anarchist theory is not inherently violent, but there is a violent faction which is revealing itself once again in America. As the violent wing gets exposed, anarchists of all stripes will rally to defend their particular branch of the family tree while largely ignoring their violent cousins – the revolutionary anarchists.

Some perhaps are only familiar with the peaceful forms of anarchy, extolling the virtues of harmonious existence in communes and mutual aid societies. There are even anarcho-pacifists and Christian anarchist movements; free love anarchists and free education anarchists. Regardless of the benign, intellectual side with its laudable and legitimate theories of mutual aid and self-determination, there has been a consistent wing of anarchism that embraces revolutionary violence as the primary tool of change. These are the individuals, the revolutionary anarchists, who seek to plunge a America into chaos.

“It is an institution of force and as such incapable of being reformed. To Tucker and his comrades, the political process and voting are nothing more than mechanisms for the tyranny of the majority. Thus, they considered attempts to work within its structure to be futile.” -Edward P. Stringham

For some this “institution of force” could only be resisted by force. American history bears out the decidedly violent tendencies of the collectivist anarchist movement launched from Chicago and New York City. However, we should not lose sight of the fact that there are members of both the individualist and collectivist camp that believe in political violence. This fact makes the left-right dichotomy of less use in the present environment.

A Legacy of Violence

Historically, revolutionary anarchists advocated “PROPAGANDA Of The DEED,” – political violence, including bombings and targeted killings of members of the ruling class for the purpose of provoking broader violence and uprisings.

“we preach not only action in and for itself, but also action as propaganda.” -Johan Most

Another part of their methodology was “EXPROPRIATION.” Expropriation means robbing/burglarizing people and businesses seen as part of the ruling class or as benefiting from their “evil system.”  This was on full display in the summer of 2020 with anarchists looting, robbing and burning local businesses across America. This is nothing new in America’s revolutionary anarchist movement:

In 1980, the First International Symposium on Anarchism was held in Portland, Oregon. In 1986 anarchists held the Haymarket Remembrance Conference in Chicago and then annual conventions in Minneapolis (1987), Toronto (1988), and San Francisco (1989).

In 1989 Love & Rage network formed in Chicago, infusing racial and other themes into the revolutionary anarchist movement:

“A new wave of radicalization is spreading around the world. Federations of anarchists are being organized in the U.S and Canada, and in other countries. The ‘platformist’ current within international anarchism, with its emphasis on the need for anarchists to organize themselves, is having worldwide effects. In these conditions, it is not surprising that there should be an interest in the last major attempt to build an anarchist federation in North America: the Love and Rage Revolutionary Anarchist Federation (L&R). Founded in 1989, it lasted to 1998, almost ten years, with branches in Mexico (Amor y Rabia) and in English-speaking Canada.” – A history of North American anarchist group Love & Rage

In 1998 the L&R Network split primarily over their organizing statement of beliefs and the argument of white privilege. L&R split into two new networks.  First, the “Fire By Night Organizing Committee,” which deliberately chose to conceal anarchism from its name “to create a new revolutionary politics more in tune with the conditions of the 21st century.” It maintained offices in NYC and San Francisco.

The second – the Fresh Revolutionary Anarchist Group, “a federation of collectives united around firm anarchist/anti-authoritarian politics and outlook, oriented to the working classes and most oppressed, and active in building Anti-Racist Action as an anti-authoritarian mass movement.”

The revolutionary anarchist movement has manifested lately in the current ANTIFA movement and among elements of the BLM movement (particularly its leadership). It is no coincidence that the refrain of prominent organizers during the summer was “make America ungovernable.” This is not a Democrat or Republican movement. It is not a movement that follows a particular leader. Sadly, Americans can only perceive their world in these tribalistic terms, and this allows the revolutionary anarchists to hide behind convenient labels.